TWO theatres are known to have existed in Waterford in the 18th Century. The earliest theatre known was the Playhouse at Blackfriars on the west side of Conduit Lane.

In recent years, the site has been home to Penny’s department store and a north wall dating back to the early 18th Century was discovered in 2009.

A later theatre housed within the Civic Offices on The Mall, which became known as the Theatre Royal, was established in 1784.

Waterford in the 18th Century was a prosperous city and the second most important city in the island. Clearly, there was a demand for theatrical entertainment and the establishment of a purpose-built theatre would have brought touring theatre companies to Waterford to establish a theatre-going audience.

The first known theatrical performance in Waterford took place at the Playhouse at Blackfriars in 1737 when the Smock Alley players, accompanied by three guest performers from London, staged ‘The Faithful Irishman’, a political comedy written by the English playwright Sir Robert Howard (1626 – 1698).

Two references of theatrical activity in Waterford in the 1740s are recorded; more than likely from the King’s Company at Smock Alley.

Between 1765 and 1773, actor-manager Thomas Ryder headed a company of strollers that were regular visitors to Waterford and in one production played the Playhouse at Blackfriars for three weeks in 1767. Ryder also advertised a new pantomime entitled Harlequin in Waterford (almost certainly written by Irish actor-playwright John O’Keeffe) boasting that he had spent forty pounds on scenery that depicted scenes of Tramore and Waterford Quay.

Also at the Playhouse at Blackfriars in November 1767, Ryder presented the premiere of ‘Love and Despair’ – ‘a tragedy written by an unnamed Waterford gentleman’.

The majority of newspaper advertisements after 1784 simply refer to plays taking place ‘at the theatre’, suggesting that only one theatre remained in operation.

However, given the fact that a new theatre opened nearby in 1784, it is possible that the older Blackfriars theatre simply closed down, as it is unlikely that the Waterford audience base was sufficient to support two theatres. Strolling theatre companies, however, regularly visited Waterford throughout the period.

The new theatre on The Mall opened on the evening of Monday 26 July 1784 with a speech by the actor and theatre manager John Vandermere and a shortened version of Shakespeare’s ‘As you like it’. The ‘Belfast Mercury’, 6 August 1784 reported on the ‘superb theatre built by the city’s inhabitants’. Vandermere followed that with a popular London comedy indicated that the theatre would also be a place for popular contemporary plays.  Charles Clagget’s orchestra, along with soprano Mrs Billington, an opera star from England, suggests that this was a serious theatre that clearly wanted to impress.

It is impossible to know for certain the seating capacity of the theatre in 1784, as there are no surviving interior plans.

However, given that the theatre was remodelled on the same ground area in 1876 to a capacity of 670, it is likely that the original theatre held approximately the same number of seats.

A newspaper advertisement for a performance of The Grecian Daughter at the Theatre Royal in The Waterford Herald on 23 August 1792 announces tickets prices as ‘Boxes 3s 3d, – Pit 2s 2d – Gallery, 1s 1d’. The pricing arrangements remains today.

In March of 1792, a strolling theatre company presented the premiere of a new opera written by a local Doctor, James St. John, entitled ‘The Siege of Waterford’ or ‘The Marriage of Earl Strongbow to the Princess Eva’. The plot centred on King Diarmuid’s capture of Waterford in 1170, and Strongbow’s subsequent marriage to Diarmuid’s daughter Aoife.

When it finally opened, such was the rush, that police had to be called to restore order. Mr. John Royston’s Comedy and Opera Bouffe Company opened the Theatre.’ Prices of admission were as follows, Dress Circle, 3 shillings; Orchestra Stalls, 2 shillings 6 pence; Pit, 1 shilling; Gallery – 6 pence. 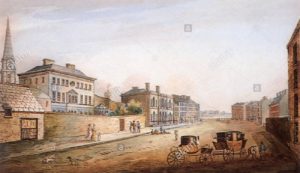 Lynn has a very interesting theory of the origin of the name. Cahill suggests that the name originates from around 1786, when the holder of the royal patent in Dublin, Richard Daly, took on the lease of the Waterford theatre for four years.

For sections of Waterford society in the 18th century, theatre-going was an important social and cultural activity. An evening at the theatre was likely to have been quite a social occasion, presenting an opportunity to see and be seen as well as enjoying theatrical entertainments.

It is also highly likely that there was a high level of theatrical activity throughout the 18th Century, including new dramatic works which may have been written and staged in Waterford, of which, sadly, no evidence remains.

The existence of theatre in Waterford from as early as 1737 is a proud boast of the rich tradition of theatre in the city during the last three centuries.