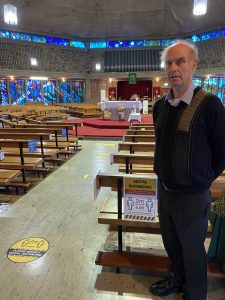 An Taoiseach’s office responded by advising the Bishops not to proceed with the celebrations as it was anticipated that Covid-19 infections would peak in the weeks before schools would reopen in the autumn, adding that the safe return to school was a priority.

The Government fears the unpredictability and transmissibility of the Delta variant could result in school closures in the autumn, and promised that the situation would be reviewed at the end of August. Presumably, with further easing of restrictions promised from that time and with the positive indications that the targets for the roll-out of the vaccination programme would be met, it would be safe to proceed with the sacraments sometime in the autumn.

Government ministers such as Charlie McConalogue, Minister for Agriculture, Stephen Donnelly, Minister for Health, Tánaiste Leo Varadkar and Taoiseach Micheál Martin, have pleaded with the Bishops not to proceed. (I must admit that this sounds rather disingenuous of Ministers when colleagues have publicly flaunted Government guidelines in relation to public gatherings. I am referring to ministers’ presence at the Katherine Zappone party and other events which party leaders attended.)

Some bishops have publicly declared that First Holy Communions and Confirmations could proceed in their respective dioceses from the middle of August. They cite inconsistency in the public health advice as the reason to justify their actions. They argue that high numbers can attend sporting fixtures, 100 guests are permitted at weddings, and the hospitality sector has opened up considerably. Previously the ban on Communions and Confirmations was linked to the restrictions imposed on the hospitality sector; because of the prior ban on indoor dining parents might organise gatherings in the family home, thus risking cross-generational viral transmission.

While one could sympathise with the Bishops’ rationale for defying the Government ban on First Communions and Confirmations, there are many reasons to question the wisdom of the very public non-compliance. First of all, the Catholic Church is the first public sector (after the Government itself!) to defy Government health and safety guidelines in relation to Covid-19. Whilst other sectors such as hospitality, the Restaurants’ Association, the Vintners Association, Retailers, Sporting Bodies…etc have lobbied strongly for easing of restrictions, no sector has openly defied Government guidelines. It sets a very bad example to parents and children and indeed all other groups who are asked to make huge sacrifices at this time for the sake of the common good. If bishops feel justified to ignore public health regulations in the middle of a pandemic, other public bodies could follow suit. The consequences of such public defiance could be catastrophic in terms of public health and delay further the longed-for return to normality.

I wonder about role modelling for young children, 12-year-olds witnessing an august body of bishops disagreeing with a directive from Government, publicly ignoring it and acting as they think fit. There must be better ways to negotiate alternative positions.

The defiance of the ban puts teachers in a very compromising position. They are, after all, civil servants, paid by the Department of Education and Skills. I have conferred with three principals of schools in our parish. They unanimously oppose the stance of the bishops and are not prepared to support them on this issue. The teachers have prepared the children for reception of the sacraments. The IPPN, the Irish Primary Principals’ Network, has advised teachers that they cannot attend the sacramental celebrations in their capacity as school representatives but only in a private capacity. The partnership of school and parish is thus effectively broken. Schools are excluded from the sacramental celebrations.

Teachers also feel that such defiance would set a very bad example for parents and encourage them to flaunt regulations in relation to cross-generational household gatherings.

The action by the bishops is very divisive. Some parishes may well proceed with the celebration of First Communions and Confirmations. Other priests will feel very uneasy about defiance of health and safety guidelines. They are conscious that some parties organised post church rituals last year became super-spreader events and contributed to a significant increase in the rate of viral transmission. Parishes who wish to comply with Government guidelines would be very pressurised to proceed with Communions and Confirmations. 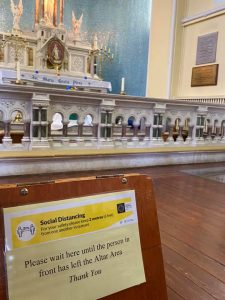 Similarly, for parents; I imagine that most parents of children in Second and Sixth Class will be delighted that they can at last look forward to the big family day after all the preparations. Other parents, however, will be scandalised with the stance of the bishops and will not want to present their child for the sacraments.

The bishops claim that the Government has effectively discriminated against the Church by refusing permission for the sacraments of initiation. They point to the very poor level of communication between the hierarchy and the cabinet. However, I am of the opinion that the Church has failed to present its case effectively. I listen to spokespersons for the hospitality sector, for the restaurants and hotels and for the vintners who consistently argue that they can manage their business and still be Covid compliant. There is no such lobby on behalf of the Church. Perhaps it is time to realise that the privileged position of the Church in Irish society is long since gone and we as Church have to justify our stance as each other sector has to. The Church has forfeited its moral authority with the disclosure of serious levels of abuse in reports from the various Commissions of Investigation.

Alternative, more public health compliant ways of celebrating First Communions and Confirmations could have been recommended. For example, First Communions could proceed on a staggered basis, with a small number of children receiving First Communion during a regular Sunday Mass. Agreement could be brokered with parents beforehand that post ritual celebrations be compliant with guidelines for family gatherings. Unfortunately, there is no spokesperson or lobby group to ensure that the concerns of the bishops are raised at cabinet level and to negotiate ways in which sacraments could be celebrated without risk to public health.

Bishop Nulty in the diocese of Kildare and Loughlin, alluding to the great sacrifices people have already made to safeguard public health, has asked parishes in his diocese to abide by current guidelines and not to proceed with the celebration of the sacraments. Given that Government ministers are now hinting that the ban on First Communions and Confirmations might be lifted later in the autumn, and in light of the possible negative consequences of defying the ban, I think Bishop Nulty is wise to advocate compliance with current regulations.