View From The Green Room: No Shades of Grey 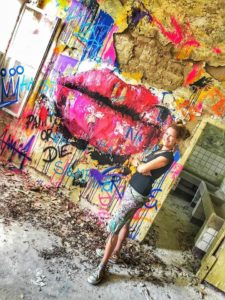 THERE are no shades of grey for these feisty, theatrical, feisty females in Anna Schellberg’s exhibition at the Tramore Coastguard Station.

These gals are so far over-the-top that they are more theatrical and dramatic than an opera because they’ve got songs to belt out that scream to be heard. From the moment you enter the beautiful gallery loft that overseas spectacular views of Tramore Bay, the pictures enter your consciousness with an experience that screams to be heard or actualised.

Schellberg used to work as an editor and reporter for well-known newspapers and magazines. Storytelling is in her blood. Today she tells stories with her pictures – ‘back then they were words, today they are very intense colour compositions. Without compromises.’

Anna’s palate is vibrant, colourful, loud, brash and alive. ‘Burning Love’ pouts a pair of pouting crimson red lips that explodes across the Coastguard stairwell and comes with warnings attached of ‘Caution, Danger, Keep out’ because these puckers are ‘Explosive’.

Faces dominate the exhibition and there is a bible of stories going on. Faces that are multi-layered with dramatic brush strokes of dramatic oranges and black on girls that are framed with a luminous aureole that remind us that these gals are not the passé-cinema femme-fatales of previous generations.

While the subjects rest in feminine pastels, their expressions and attitudes force you to stand and consider your position. The lady in pink relief is having ‘Quite a bit of fun’ but at who’s expense? With only one eye open and a glossy-pink tongue, the object of her laugh is elusive. A girl, with sunglasses so large they could be seen from outer space, stares back at me in ‘Windows to the Soul’. Another shades-stalker carried a ‘Manhattan Surprise’ in the skyline of her gaze. 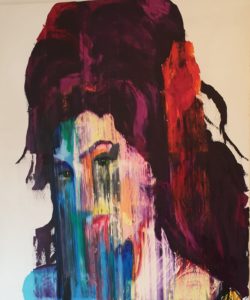 There’s a sense of contempt and dismissiveness from Anna’s modern urban women that’s perfectly captured in their off-the-cuff smoking attitudes. Despite the four rollers in her orange-tinted hair, ‘Roller Girl’ challenges previous incarnations of her feminine self with a cigar that only a Bond villain would dare to puff and a stare that would send would be admirers to a scuttling safe corner.

There was no avoiding the enigma that is ‘Never Look Back’, however, in a picture that really is a master class in point of view. You could frame any entire opera around the emotions and the thoughts that came with the startling off-centre gaze of a young woman, knuckled fist to the jaw, clearly mulling over an issue of burning importance to her. What does ‘never look back’ mean? Who is the subject addressing? The self? The viewer? The uninitiated? I returned to the Coastguard Gallery several times to stare at the woman that stared at a past that still co-exists in the present.

Audrey Hepburn is an enigmatically elusive Holly Golightly in ‘Breakfast at Tiffany’s’; the 1961 American romantic comedy that tells the story of the naïve eccentric café society girl who falls in love with a struggling writer.

Her passions and thoughts are as cloaked behind what seems a rain-soaked canvass print as they are in the Truman Capote’s 1958 novella. An equally elusive Amy Winehouse is the focus of ‘Camden Girl’ stands and stares in a similarly blurred frame beside Audrey’s; two women who bucked the trend and told their own stories. Schellberg forces our attention beyond and beneath the blurred, fragmented images of Audrey and Amy to conjure on what lies hidden beneath the surface of what we assumed we knew of the pair because no one person has a monopoly on understanding.

Tramore is blessed to have the Coastguard Cultural Centre in such a fabulous scene-stealing location. This collection was different…an exhibition loaded with pop art sensibility, brash colours and strong character. There was a cinematic flourish to these arresting portraits of confident women posing for the public gaze. It was a rare opportunity to see up close the work of this fine German artist Anna Schellberg from Hamburg.