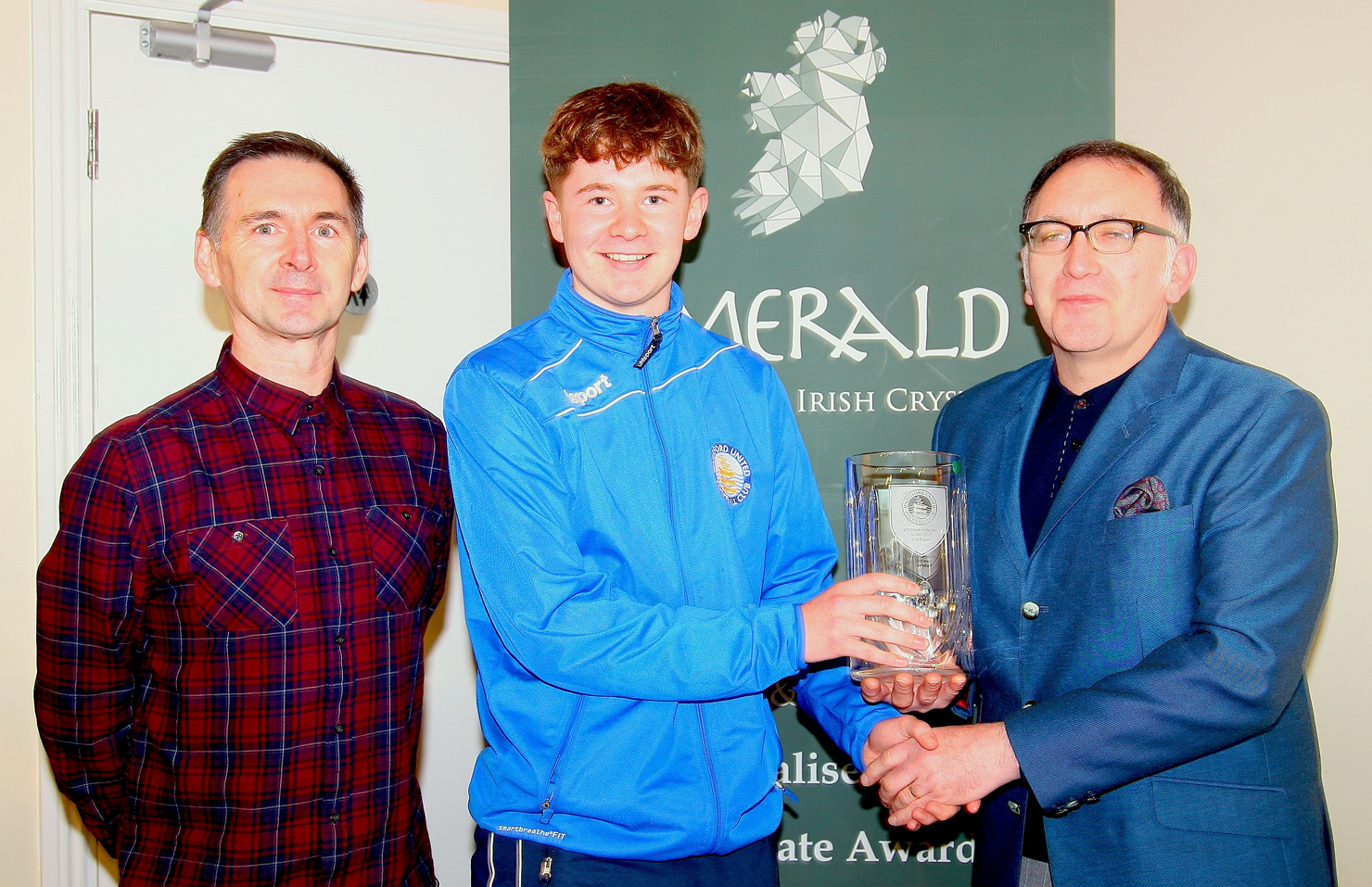 The late Roy Butler receiving his Waterford United U-19 player of the year award form Derek Browne and Davy Burke back in December, 2015.

There are no words to describe the numbness and pure devastation that so many football people across Waterford City and County felt yesterday (Tuesday)) when the heartbreaking news filtered through that Villa FC player and former Waterford FC player Roy Butler had died suddenly at the age of just 23.
Roy, who was born on October 28, 1997, was a graduate of the Villa Academy where from a very young age, he was a passionate and hardworking central defender, and a player that played with his heart on his sleeve whether it be for club or county at all levels.

After winning many honours with his club at Schoolboy League level, Roy was also part of the FAI ETP and Munster Schools’, and it was from there that he made the move to Waterford United at the time where he signed for the Blues Under 19 squad back in July 2014.
He was named the Waterford United Under 19 player of the year in 2015, and went onto become a regular starter for the First Team under the then manager Roddy Collins.

Roy captained the Blues during that 2016 season against Ringmahon Rangers in the Munster Senior Cup, and in the Blues’ final home game as United against Athlone Town, he was sent off, and he often joked about been the last man to be sent off for the club. That was just Roy.

When finishing playing with the beloved Blues, he moved back to the Connor’s Park club where he played most recently at Premier League level, and whilst helping in a coaching role, he was part of the Villa coaching staff that won the Munster Youth Cup last year.

An avid Liverpool supporter, he attended many games at Anfield, but it was his hometown clubs of Villa, and his beloved Blues, that meant the world to him where he always supported the Blues through thick and thin before, during, and after playing for them.
Known for his affectionate smile, pure loyalty, and his dedication to the beautiful game, Roy could be best described as a man that would do anything for any of his family and friends, all whom have been left shattered and numb by this sudden loss.

To his heartbroken parents Martin and Angela, his brother Aaron, his extended family, his former team-mates, his former managers and coaches, all at Villa FC, his work colleagues at Bausch & Lomb, and his many friends, the Waterford News & Star offer our deepest and sincerest sympathies on the loss of the “people’s person”. Rest in peace Roy.

*A full tribute to Roy will appear in next Tuesday’s printed edition of the Waterford News & Star.