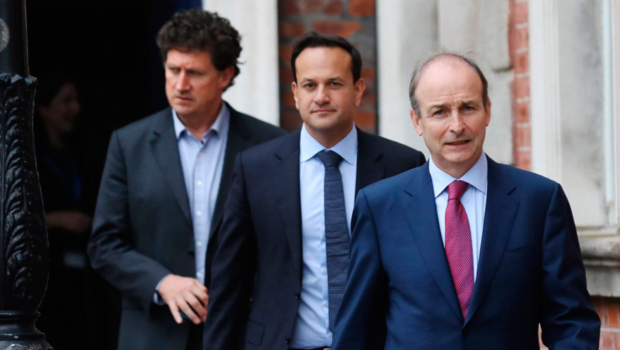 The View from the Blue from the Waterford News & Star, September 7, 2021

INDIVIDUALLY, I don’t think Leo Varadkar, Eamon Ryan and Michaél Martin are the worst politicians in Ireland. However, like some sort of political chemistry experiment, when you put all three together you get something unstable, yet, somehow, unbreakable.

They’ve all been involved in controversies that would have brought down previous governments but this shower know that like a good Harvey Norman sale, when they’re gone… they’re more than likely gone for good. This is why they will do literally anything to keep their tenuous grip on power, including, if you’re the Fianna Fáil Taoiseach, defending just about every balls up that Fine Gael and the Greens make. It’s funny, isn’t it? When you’re not in power, you’ll pull at just about every loose thread in the opposition’s beige cardigan. Sinn Fein have built their political careers on this very premise. Yet, when you find yourself sharing that very cardigan, you’re reluctant to pull at anything, in case the whole thing falls apart. This type of behaviour tells me that the last shred of honesty and humanity has long since left this country.

It used to be the case that a fervent, strong-willed person would use their passion and beliefs to catapult themselves into the political arena. There, they would fight for their community, their county and maybe even their country. At least that was the plan. Sadly, what actually happens is that after just a few weeks in the arena, their personalities, and the morals their parents gave them, are eroded away until all that’s left is a political animal that will do whatever it takes to survive. This is why the politicians that we know today lie more than they ever thought that they would. And when faced with any kind of controversy they seem unable to back down, choosing instead to double down.

“Why did you delete your texts Mr Coveney?” He was never going to back down and admit that he did so in a moment of panic and stupidity… in a moment of sheer ‘mé féinism’. No, he decided to double down instead. “I was hacked,” he said. That may well have been the case, but that’s absolutely not why you deleted your text messages and the whole country knows it.

Opposition parties like Sinn Fein are going to have a bonanza of an election next time out, and it’s not because of how great they are (because frankly, they’ve never had a chance to prove their worth, and when given the chance they’ve regularly fluffed their lines), but because of how absolutely desperate the Government has been. Yes, people want change, but more than anything else, they want honesty and accountability – traits that I still believe will get you far in politics. You see, in the political arena, the politicians think that the electorate are overwhelmingly thick. They think that we’ll believe every bit of waffle that comes out of their mouths and if, Heavens above, they actually treat us like intelligent, level-headed people, we won’t know what to do.

Consider this scenario for a second: A politician has a few drinks one night and goes on to Twitter and calls one of his opponents a “lying scumbag that would benefit from an introduction to a baseball bat”. His aids, assistants and colleagues ring and text him, telling him to “delete that for Christ’s sake”. He does so and heads off to bed, angry and bemused in equal measures. The next morning, the screenshot has gone viral and the opposition parties are having a field day. We rarely have long to wait until said politician declares that he was “hacked”. This poor excuse for an excuse has been rolled out more times than “I wasn’t feeling well” and really needs to be retired for the sake of self-respect and self-responsibility. Imagine, if you can, a politician goes on Morning Ireland and says that over the last few weeks Politician X has been slinging mud at him from every angle and then, the previous night after having a load of pints at a wedding, he did what every single human being does on a daily basis – he made a mistake. He is human after all. I guarantee that the majority of text messages flooding into RTE, the ones that are not from his opposition and their supporters of course – will be understanding. They may even applaud him for taking some responsibility for his actions instead of, once again, passing the buck and hoping that the media, and the public soon find something else to chew on. Sadly, this is exactly what has been happening. This coalition has been hopping from one balls-up to the next, and we continue to let them get away with it. The question is, how do we bring the house of cards down? The only answer I can think of is to continue questioning their actions. Make sure that every lie, and every piece of daily obfuscation is probed and prodded until they are left with no alternative but to finally accept responsibility for their own actions, and do the decent thing.