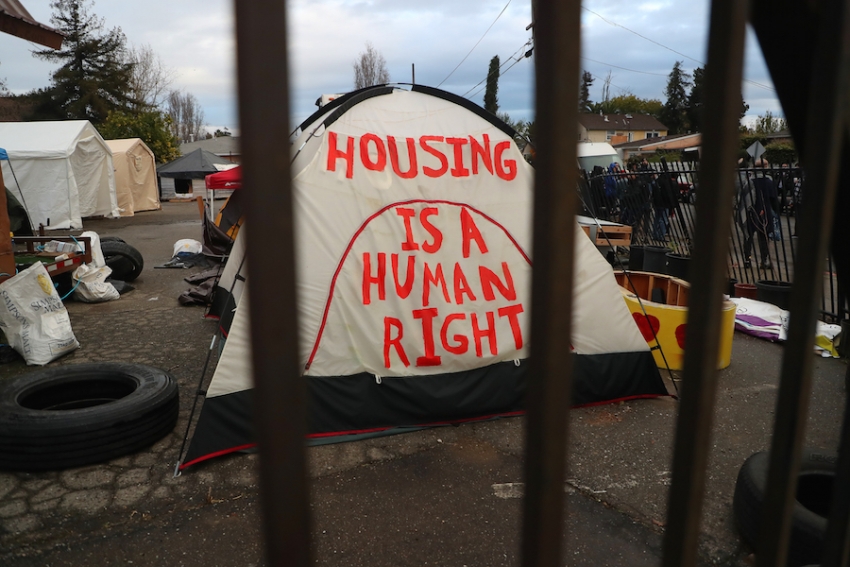 THE housing crisis is still with us. Taoiseach, Micheal Martin, describes it as a national emergency. Despite the promises contained in ‘Rebuilding Ireland Programme’, issued in 2017, very little progress has been made to ensure the provision of affordable and social housing and thus to significantly reduce the number of those who are homeless in our country today. It is a scandal that so many are living in fear of forced evictions because of mortgage arrears or forced to live in over-crowded accommodation with relatives. Children are deprived of the freedom and innocence of childhood because the family is forced to live in a hotel room.

‘If we perceive housing as an essential human right, the provision of social housing must be a key element of policy.’

Christians cannot turn a blind eye to the plight of the homeless. After all, the central tenet of the Christian faith is the Incarnation: God becoming human in Jesus of Nazareth committing Godself to the human struggle. Because of Incarnation, the Christian encounters Christ in the face of the homeless, in the couple evicted from their home, in the family who are burdened with stress and fear because of rent or mortgage arrears. We are reminded in Scripture that those who recognise and respond to Jesus present in the poor, the hungry, the sick etc are the ones who will “inherit the kingdom of heaven”. “For I was hungry and you gave me food, thirsty and you gave me to drink, sick and you visited me…” Pope Francis urges Christians to find Jesus in the faces of others, in their voices, in their pleas. A commitment to justice for the homeless is not an optional extra for Christians; rather it is an imperative that flows from the very faith we profess.

Admittedly, as individual citizens, we feel so powerless when it comes to effect change in housing policy. I believe though that there is much we can do to transform aspects of our culture which contribute to the housing crisis. Social Justice Ireland and the Irish Episcopal Conference in the pastoral letter on Housing and Homelessness have challenged the government and society in general to perceive housing as a home not as a commodity. A home is a precondition for the flourishing of family life, for security, for mental health. We must view housing as a social good, an essential component of ensuring a decent standard of living. In other words, housing cannot be viewed solely ‘as yet another market-place opportunity for investment, speculation and capital gain’ and that we cannot be over reliant on the market for the supply of houses.

The cultural change will also embrace a new mindset whereby we recognise housing as a fundamental human right. Pope Francis has described the right to housing as ‘sacred’. The Episcopal Conference has urged the Government to hold a referendum on the right to housing which, if passed, would mean that this would be enshrined in our constitution. The Taoiseach has promised to hold a referendum in the lifetime of the present Government. Governments and politicians could then be held accountable if this right is not respected.

A new cultural awareness will not tolerate forced evictions. We need a much more innovative and radical approach to tackling mortgage arrears. (There are over 30,000 mortgages in long-term arrears). The culture at present is focused on accelerating repossessions which inevitably leads to households being driven into homelessness. Social Justice Ireland has urged the Government to consider acquiring an equity stake in houses with mortgage distress, which would ensure that families could remain in their home. Otherwise, families may be forced to avail of the Emergency Homelessness Accommodation shelters or to avail of the Housing Assistance Payment subsidy (HAP). Social Justice Ireland argues convincingly that their proposal to acquire an equity in the mortgage distressed home would be much more cost effective than either of these projects. The ‘Housing for All’ Strategy does not address this issue.

However, there is much to be lauded in the Government’s Housing for All strategy. In particular, the commitment to provide 6,000 affordable homes a year for the lifetime of the plan (over 54,000 homes) will be welcomed by many young couples whose income threshold is such that they do not qualify for a mortgage. The affordable homes can be acquired through the Local Authority Affordable Purchase Scheme or through the Cost Rental Scheme. Many of the provisions will help to support a radical reappraisal of housing culture; – henceforth viewing the housing market as primarily serving the people and society rather than enriching a few developers, and thus as a key dimension of the Common Good.