Great times for Master Franks and his students

It was a great day for Neil Franks recently in Dublin as he was promoted by the Irish National TaeKwon-Do Association to eight degree Master. He is pictured with four of his students who were promoted to first degree Black Belt – Eric Vorchykhin, Rhiana Vorchykhina, Patrick O’Leary and Eoghan Murphy.

There was great excitement recently as Master Neil Franks was promoted by the Irish National TaeKwon-Do Association to eight degree Master. This is an exceptional achievement as it is the second highest level in the art of TaeKwon-Do, ninth degree being the highest. Master Franks has been training for 40 years to achieve this title. Originally he started in South Africa and then came to live in Ireland in 2011. Since then he has dedicated his time here to developing the standard in Waterford to an International level.
Following his grading four of Master Franks’s students were promoted to first degree Black Belt at the Irish National TaeKwon-Do Association Black Belt Summer grading in Dublin.
They are: Eric Vorchykhin, Rhiana Vorchykhina, Patrick O’Leary and Eoghan Murphy.
Master Franks is extremely proud of his students’ achievement and stated, “They are true warriors! Never giving up through the Covid crisis, they kept training and persevered with their indomitable spirit. Well done on an extremely impressive grading.” For more info on Master Franks TaeKwon-Do & Fitness Centre contact 086-1005508. 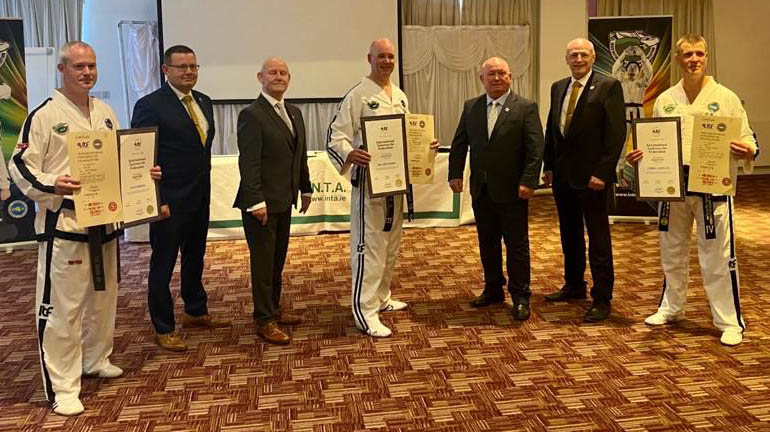