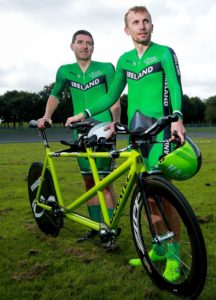 Damien Vereker and Marcin ‘Martin’ Mizgajski have brought the best out of each other on the tandem bike over the past year, narrowly missing out on Paralympic qualification. Photos: © Inpho/Tommy Dickson

DAMIEN Vereker and Marcin ‘Martin’ Mizgajski clearly make for an outstanding pair. Competing on the two-seat tandem bike, with New Ross-based Marcin as his pilot, Damien narrowly missed out on qualifying for this year’s Tokyo Paralympics having placed eighth at the 2016 games in Rio de Janeiro.

In June, Damien and Martin finished ninth in the UCI Paracycling Road World Championships Time Trial held in Portugal over 33.6 kilometres, an achievement which went somewhat under the radar at the time.

“When you’re there in the moment, having a top 10 finish at world level was a bit overlooked in the days directly after it because it hadn’t been enough to make Tokyo,” said Damien.

“But once I got home and the dust was after settling a bit more, I realised what a major achievement it was to finish that highly.”

Married to Jennifer and stepfather to Alanna, Damien, a Kilkenny native and WIT graduate now living in Waterford city, has a vision impairment called Retinitis Pigmentosa (RP). This is a hereditary degenerative eye disorder which affects the retina, the light sensitive tissue which lies at the back of the eye.

In a 2018 Waterford Sports Partnership profile, Damien, who is the organisation’s Sports Ability Ambassador, noted: “I have loss of central vision (6/190 in right eye and hand movement only in left eye). I have total night blindness, colour blindness, and loss of peripheral vision. I use a sighted guide or a long white mobility cane to navigate my surroundings and environment. I access computers via a screen reader called JAWS. I have voice over software on my mobile phone to enable me to access phone and text messages.”

A keen sportsman, having run the Dublin City Marathon in 2004 while also trekking 100 kilometres through Argentina and Chile as part of the Fighting Blindness Patagonia Challenge in 2005, Damien’s competitive cycling career didn’t begin until 2009.

“Comeragh Cycling Club added Paracycling that year,” said Damien, “and that gave people with vision impairments the chance to cycle with some of the best riders in this part of the country.”

Damien’s stock in the sport rose swiftly, as longer spins on the bike and regular gym sessions began to pay off. In 2013, he competed in his first Paracycling Ireland Time Trial aboard a bike Comeragh CC had bought for training.

“We were well down the field but it really gave me a great insight into what I needed to do to improve competitively,” said Damien. By the end of the year, Damien had been awarded the White Jersey as Best New Rider in his league and in 2014 claimed the winner’s Yellow Jersey with Martin Kirwan as his pilot and coach.

The following year, Damien finished runner-up in the league, with his sport taking him to the Czech Republic, Germany, Belgium and Spain that season. Martin stepped down as pilot and in came Marcin Mizgajski. The new pairing gelled quickly, claiming a third-place finish in the 2015 Prague European Cup.

The following year, Damien and Martin won a UCI World Cup road race in Cape Town (also taking bronze in the time trial) but weren’t paired together for Rio due to criteria in place at the time.

Nonetheless, taking their place on the Irish team naturally represented a career highlight for both riders, gaining a status they’ll be forever proud of. 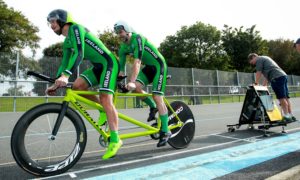 Damien and Martin, members of the Cycling Ireland Elite Paracycling Squad, trained with incredible intensity over the past 18 months. “He’s like a brother to me,” said Damien.

“We go back six years now at this stage,” said Damien of his partnership with Martin. “He took a break from tandem for a few years to concentrate on triathlons and then came back with me in 2019 for a World Cup race in Italy where we came eighth. Other pilots, for differing reasons, couldn’t commit to the programme full time so in October 2019, Martin was back in with me full time, which was just unreal. He’s only down the road in New Ross so that made hooking up for training a lot easier as well. If there’s no-one around to give me a lift, I can get the bus down to him, which is only half an hour, and then Martin regularly comes down to me. It’s been really good for both of us and it’s allowed us to put in much more hours on the bike together as well.”

Of Martin, Damien added: “It’s been brilliant having him back; I’d class him like a brother to me at this stage, that’s how close we are. He’s so easy to talk to and he’s a great sounding board for me too but we tend to communicate through the bike when we’re training and competing. We might use the odd code word at times but you just get a feeling through the pedals; like I’ll know when we’re going round a bend, I’ll know from the position of the pedal which way to lean – if the left pedal is up, then we’re going into a left bend. I can’t see when Martin is on or off the saddle so all of that is through feel now. Before, Martin would shout ‘up’ or ‘down’ but he knew that’d put us at a disadvantage in a road race because the rest of the bunch would know we were planning something – but now I just know, through the feel of the bike, whether Martin is on the saddle or off it. I have 110 per cent trust in him.”

With Paris only three years away, Damien is determined to return to the Paralympic arena. “I’m always thinking about what’s next – I’m always planning ahead. The qualification for Paris will be starting more or less straightaway next year and 2024 is what I’m aiming for now.”