LAST week children across Waterford were making the return back to school, getting up early with excitement for the day ahead, sorting the uniforms and packing lunches into schoolbags. In a house in Tramore, the day began much earlier than in most other houses, because for six-year-old Amelia Walsh, her day begins with stretches with her Dad, Colin, while her Mum, Rosemary, gets everything ready for the day, assisted always by Amelia’s three-year-old sister, Abbie. Once the morning routine was completed last week, Amelia walked into Holy Cross National School in Tramore, excited to see her friends and to meet her new teacher. 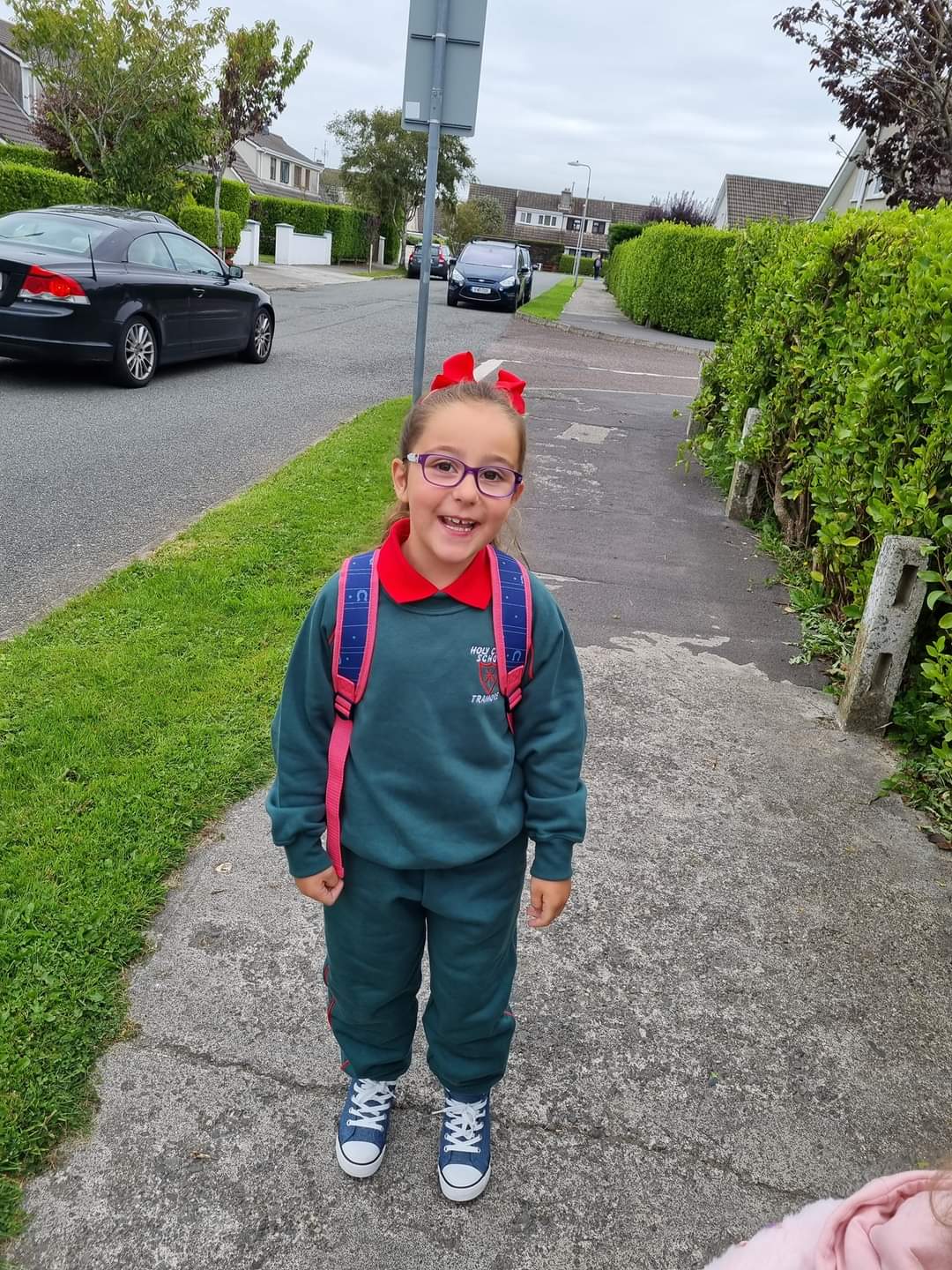 Amelia was born was a rare congenital heart condition called Tetralogy of Fallot, and was eventually diagnosed with Cerebral Palsy. For Amelia and her family, nothing is guaranteed, but she continues to rise to the challenges that each day brings, and she faces stretching, physiotherapy, appointments, and new environments with determination and hope.

Amelia’s mum, Rosemary Flynn, spoke to the Waterford News & Star about their journey as a family thus far.

“At the 26 week scan, we were due to find out whether Amelia was a boy or a girl. The girl performing the scan stopped and called someone into the room and they told me there was a valve there that they weren’t happy with in her heart,” said Rosemary.

From that point on, a weekly check-up in Dublin was necessary, where Amelia’s growth was measured and her heart was scanned from every angle. Each week from 33 weeks pregnant, Rosemary and Colin received a call from the hospital with the results of a chromosome test, and conditions such as DiGeorge Syndrome and Downs Syndrome ruled out one-by-one before a diagnosis of Tetralogy of Fallot was made.

When Rosemary’s waters broke, she was in University Hospital Waterford with her family, who were all accompanying her nanny, Mrs Christine Ronan, who was undergoing cancer care. An ambulance transferred Rosemary to Dublin.

The statistics for children born with Tetralogy of Fallot indicate that 80% of children do not survive, so Amelia was to be born in Dublin where her care would begin immediately.

“Our heart rates both dropped during labour, there was a rush to deliver Amelia and I passed out afterwards. They took her away from me into ICU but she was so strong. Three days later, we took her home awaiting a date for open-heart surgery. We didn’t allow any visitors, you would swear Covid existed then, because we couldn’t risk her picking up any infections or bugs.”

After four months, Rosemary and Colin were told that Amelia’s oxygen was down to 50% and that her pallor had turned grey. It was time for the five-and-a-half-hour surgery.

“When we saw her afterwards, I’ll never forget it, she was ice cold with all the tubes in her,” said Rosemarie. “It was like putting your hand into a freezer. She was so small with a backup pacemaker, five drainage tubes, but she was freezing. They needed to bring her temperature down very low for her heart to get a beat, they had ice packs all over her. My Mum, Christina, was there for every single appointment with us, before she was born and long after, we couldn’t have got through any of it without her.”

After seven days, Amelia defied all the odds and she was strong enough to go home. The hospital told her parents that an adult having undergone the same procedure would be out of action for seven months, but Amelia had an uncanny determination, and she went home.

Due to the scar from her surgery, Amelia had never had the ‘tummy time’ that is recommended for babies in order to strengthen their core. Once the scar had completely healed, Rosemary tried to do tummy time with Amelia but she seemed stiff, and something didn’t seem quite right. When sitting, she was hunched, she didn’t seem to be able to control her movements into a natural sitting position.

“I could put her in one spot with all her toys around her, and an hour later, she could be in exactly the same spot. On the changing unit, her feet always seemed stiff. When she reached 12 months old, there was still no go out of her at all. I tried lots of different things with her to encourage her but her feet were always angled out the way, really stiff, she couldn’t stand up.”

Rosemary contacted Crumlin Hospital who felt that she may just be a little stiff and they referred Amelia to a physiotherapist in Waterford. The physiotherapy shared the view that Amelia was just a little stiff and felt that she just needed to be eased out of her position. Rosemary and Colin didn’t accept this, they constantly felt that something wasn’t right and they needed to find out. A referral was finally given to the Central Remedial Clinic in Waterford and very shortly, Amelia was diagnosed with Cerebral Palsy at the age of 18-months. Her lower limbs were affected and at 19-months-old she had a set of leg splints moulded and cast.

“We asked if she would walk and we were told, ‘We don’t know.’ Amelia is like a jack in the box, her limbs are wound very tightly so every single morning, we stretch her out so that she is loose and relaxed at the start of the day. If we don’t stretch with her, she seizes up completely and her legs turn in and she can’t walk. Colin stretches with her every morning and every evening. At the weekends when he is off work, he could be an hour and a half stretching with her using her vibroplate and her stretching bands.”

Amelia also swims, horse rides, and goes to regular physiotherapy sessions to keep her legs limber and to hopefully give her the skills to continue the stretches and work as she continues to grow older. For Amelia, the playground and the classroom are places which she must scan quickly for fall risks before she enters. She has learned to identify a handrail or a place to hold in the event she may fall, which is unavoidable sometimes. Yet, for a little girl who has so many daily obstacles to overcome, she is never without a big smile, a giggle, and a sense of excitement.

“Sometimes I almost grieve for the childhood that Amelia should have had, I have a wardrobe full of shoes that will never fit because her splint won’t fit into a standard shoe. Amelia is the most wonderful child,” said Rosemary, “because she never gets defeated, she never complains, even though the splints often cut into her little legs. We were given no guarantees that she would walk, we were told a wheelchair was a likely possibility, we were given no guarantees that she would survive heart surgery, and yet she walked into school last week to start a new year in Senior Infants.” 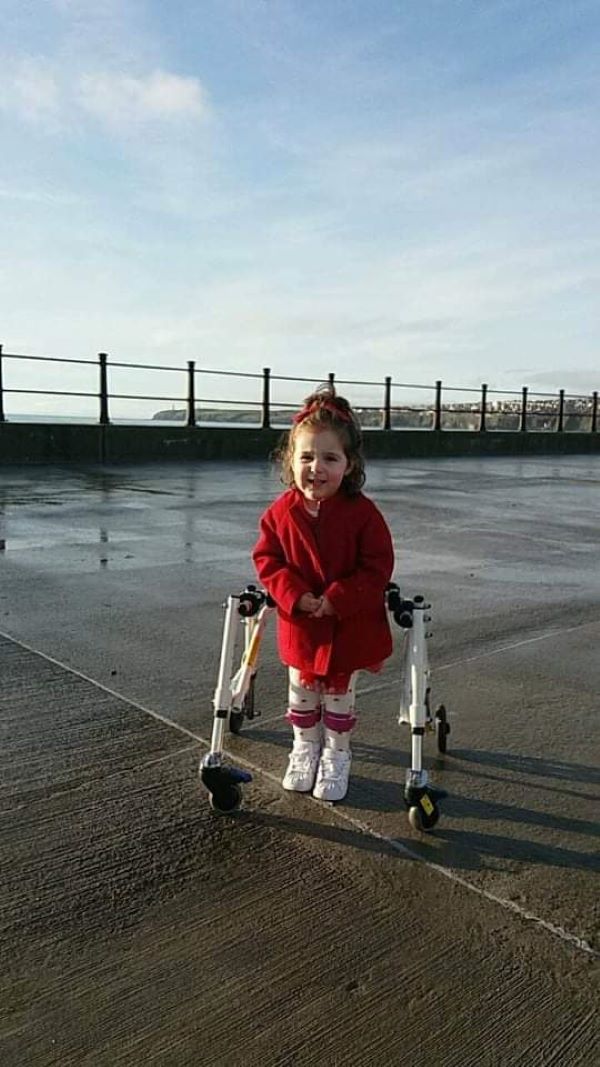 Amelia has been working every week since February with John Butler who has created a physiotherapy environment for Amelia that is suited to her needs. As parents, the best feeling of all is seeing Amelia walk out of her sessions smiling because she has had fun, and she is proud of what she is achieving each week. There is a lifetime of work ahead for the Walsh family but Colin, Rosemarie, Abbie and their family are a loving family, determined to give the children the best world that they can. Amelia continues to face each challenge with a sunny disposition, a cheery determination, and a big smile in school each day.