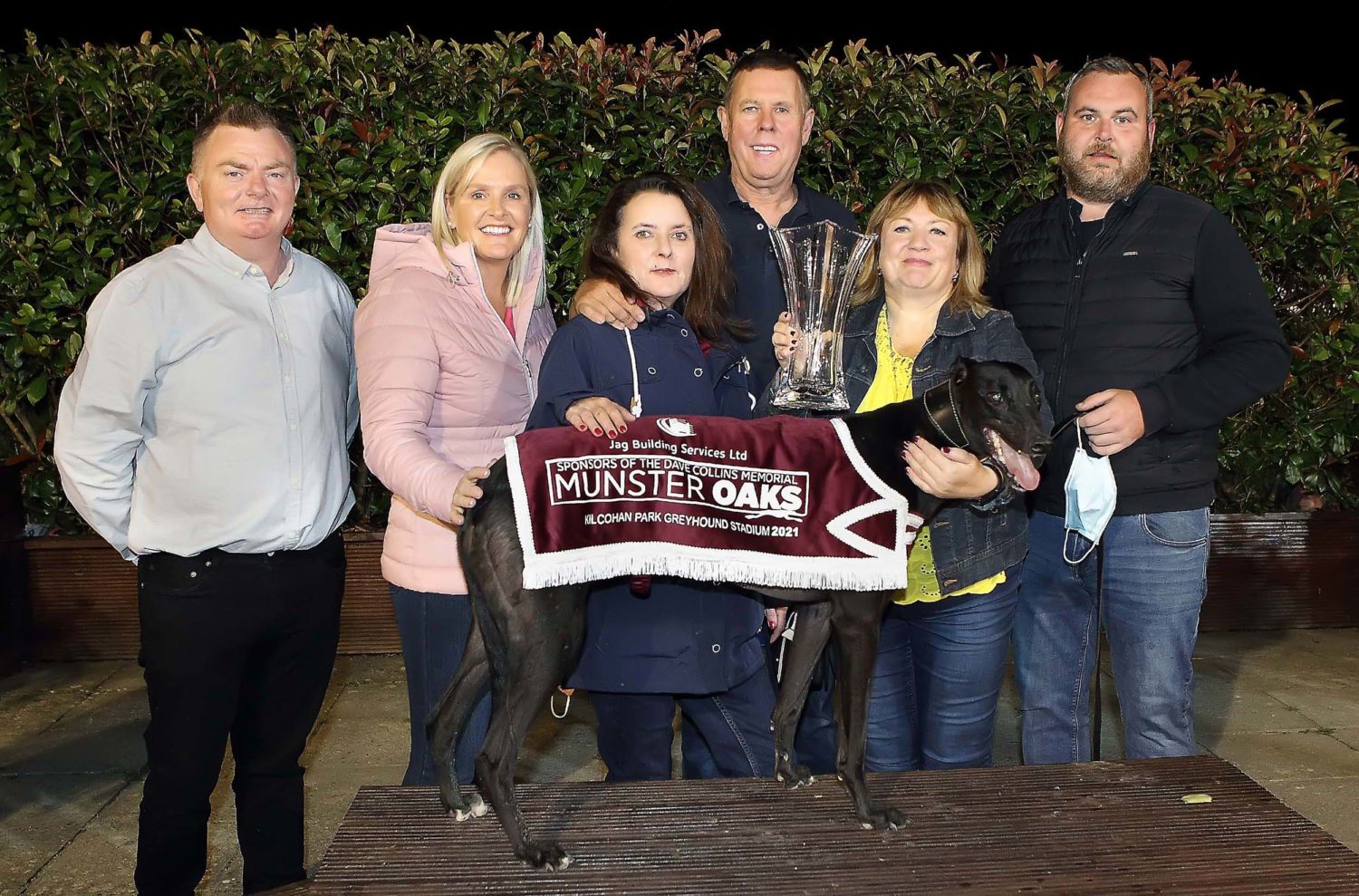 There were four finals down for decision on a twelve-race card last Saturday night.

The Dave Collins Memorial Munster Oaks. Winner €5,000.
(Kindly sponsored by JAG Building Services)
Utilising her proven early pace from trap two Clona Skye 6/4 made every stride a winning one in 28.41. While ‘Clona’ was in control of matters down the back stretch her kennel mate Ballyhimkin Pip was absolutely flying at the finish but digging deep ‘Clona’ emerged victorious by a short head in what can only be described as a pulsating finish, Scooby Duchess kept on well for third albeit one and a half lengths in arrears of the runner up. 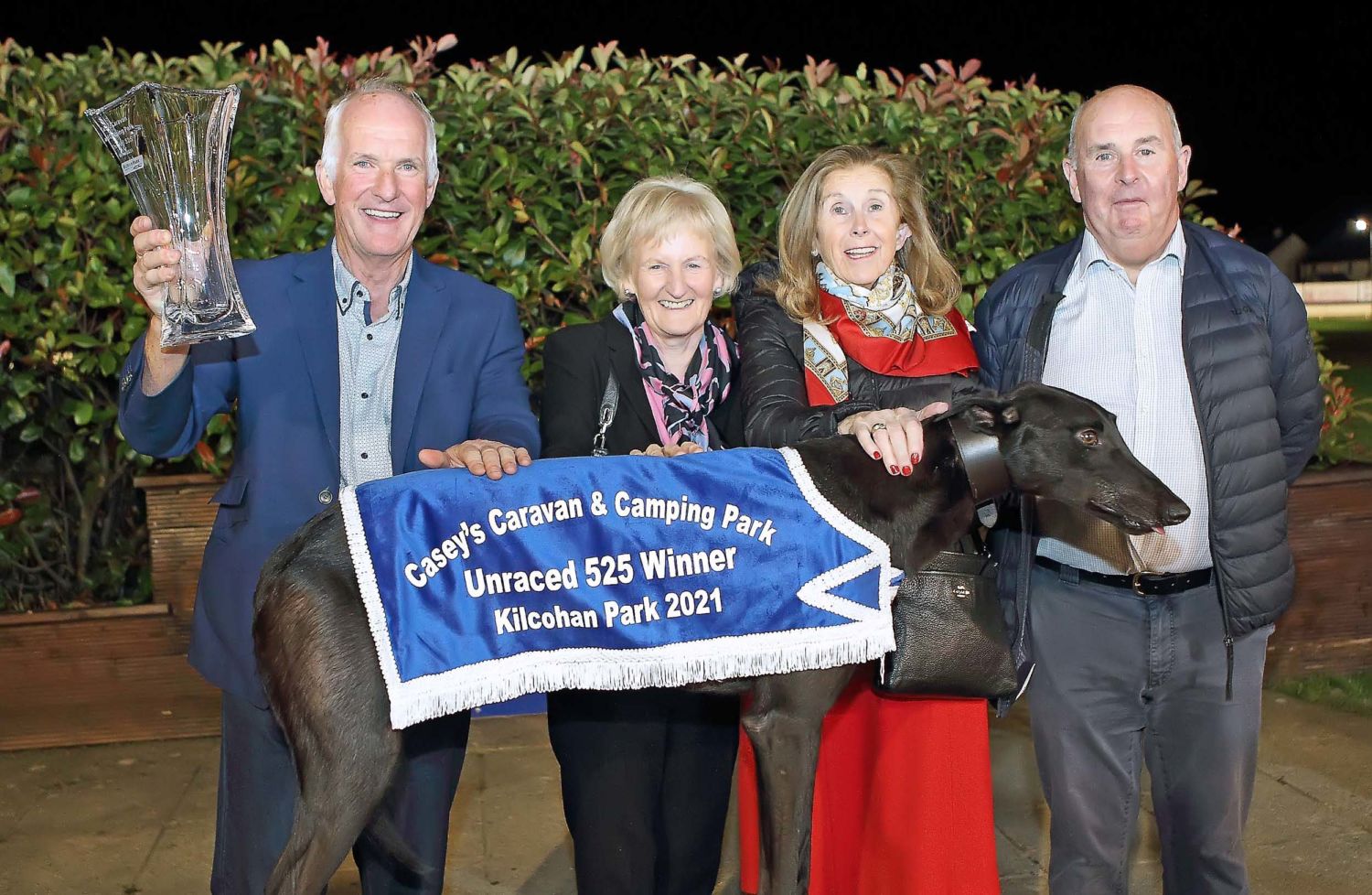 Caravan & Camping Park ON1 Stake. Winner €1,500.
Twoinarow the 5/4 market leader produced a superb display of front running leading all the way from trap five in an excellent winning time of 28.28. Getting the better early on of Noelles Prosecco Twoinarow turned on the style down the back stretch before running out a facile five lengths winner over a slow starting Droopys Optimum.

The Waterford Track Supporters Club A3 Stake. Winner €600.
Explosive Sash made a bright start but it was the 6/4 favourite Sentimental Lad who displayed the superior early pace to corner in front. Astons Shadow went in pursuit of the winner down the back stretch but ‘Sentimental’ would not be denied accounting for a hampered but fast finishing Son Of Spoofer by four lengths in a career best 28.49.

The Waterford Track Supporters Club A2 Stake. Winner €650.
Owners Killian Power and Master Jack Walsh were on the mark courtesy of Chashers Toby this 2/1 chance making practically every yard of the running in 28.92. Motoring into an early lead over Cocooner and Dysert Sonia ‘Chashers’ was soon on course for victory. ‘Dysert’ eventually won the battle for the runner up spot a length in arrears of ‘Chashers’ at the winning line.

The second of the Waterford Track Supporters Club 525 finals race was won by the Killian Power trained Chasers Toby. Jack Walsh is pictured receiving the winner’s trophy from Stan Bergin, Waterford Track Supporter’s Club. Also included were Kim Bergin, Aileen Lennon, Greyhound Racing Ireland, Micheál and Peter Power holding his dog, Corbrack Dan which also took part in the final.
In the opening graded contest Autumn George led to near the second bend where he checked as Slaneyside Adler then led from Three Counties and Classic Chick. Owned by Trevor Power and trained by Jimmy Power ‘Classic’ 4/6 kept on best close home however for a length and a half success over ‘Slaneyside’ in 29.32.
In race two over the 575 yards trip the Willie O Connor owned Proper Pandemic the 6/4 market leader made practically every yard of the running landing the spoils in 32.12. Leading down the back stretch from Avongate Aurora and Black Coke ‘Proper’ eventually ran out a one and a half lengths winner over a slow starting but running on Yard Boysar.
We dropped down in trip for the third event run off over the two-bend trip of 325 yards. Nans Spark and Joe Nuggets showed up well on the run to the opening turn but as this pair opted for a middle to wide course the Paddy Phelan and Sean O Donnell owned Proud Pat 2/1 quickened into the lead on the fence before running out a two and a half lengths win over Brideswell Rambo in 17.94.
It was back up in distance for race four decided over the marathon trip of 730 yards. Archaton Sean made a bold bid from the front but when the leader began to tire Lyla Foskin’s Miss Tumbles 2/1 darted into the lead between the final two bends before running out a two lengths winner over Woodpecker Kate in 41.23.
In the sixth contest On Stage Daisy made a positive start but taking the shortest route home Toker Hollie 2/1 struck the front between the opening two bends. On Stage Daisy came without a renewed effort up the home stretch but ‘Toker’ prevailed by half a length. Time 29.27.
Race seven over 575 yards went the way of the Master Eamon Mackey owned Brynoffa Sweet this 4/6 favourite producing a big run to triumph in an eye catching 31.16. Powering into a first bend lead over Lough Mask ‘Brynoffa’ never took her foot off the accelerator on her way to a four and a half lengths success over ‘Lough’.
In the tenth event the Philip Gough and John Fitzgerald owned and Philip Gough trained Sparta Jenny 2/1 coped well with a jump in class running out a comfortable winner in a best ever 28.49. Poaching an early lead ‘Sparta’ quickly set sail for home. Tinahue Lady stayed on well into second place but was two lengths in arrears of ‘Sparta’ at the winning post.
In the lucky last Toker Alvor led around the opening bend but at the entrance to the back stretch he left a gap up his inside as Strides Banjo 1/1 sailed into the lead. ‘Strides’ got every yard of the standard trip staying on strongly for a three lengths success over ‘Toker’ in 28.84.
Going rating. 325 yards normal, 525 and 575 yards .10 fast and 730 yards .30 fast.