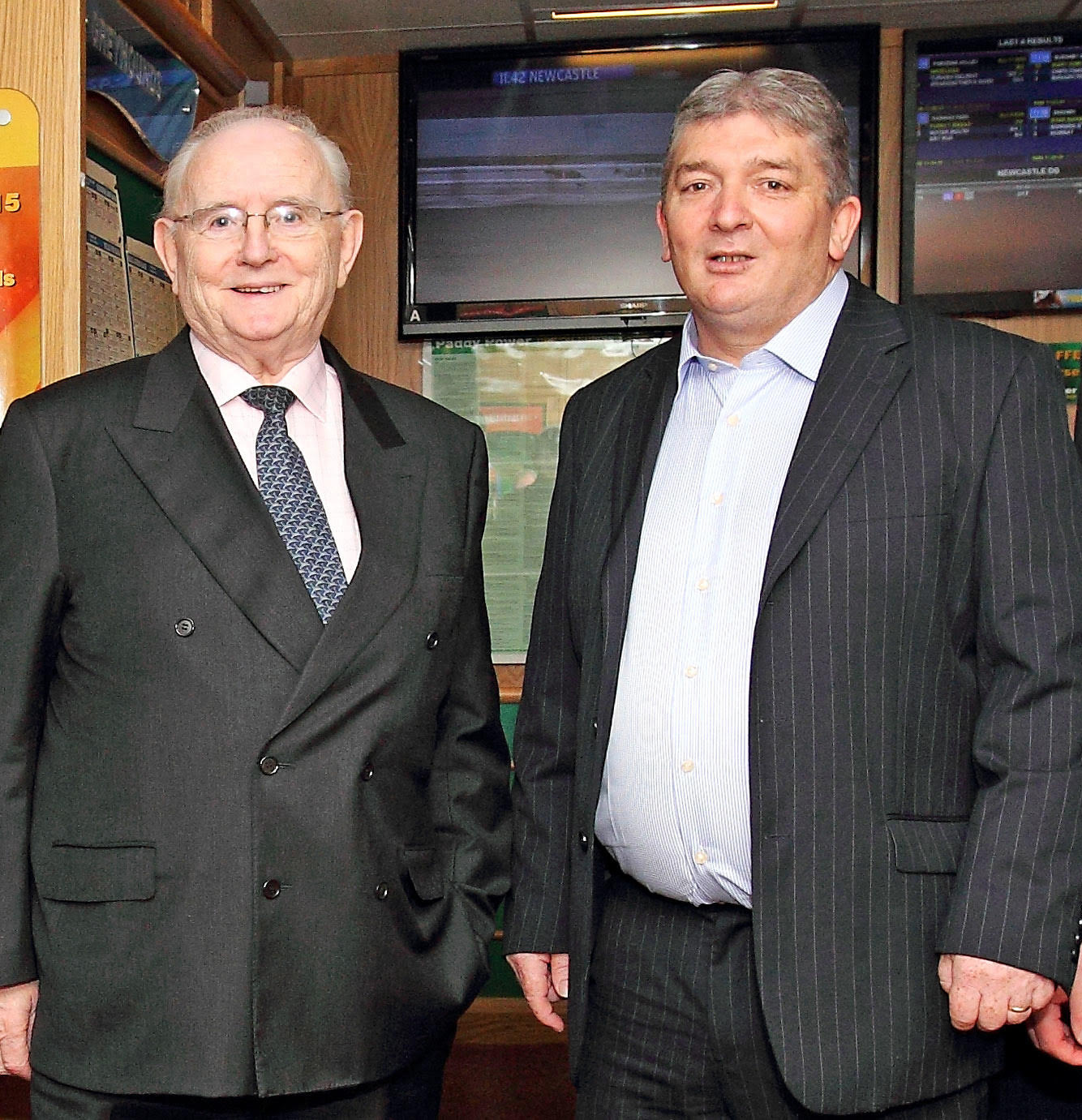 The late Derek Power and the late Jimmy Magee in Paddy Power’s St John’s Park in 2013 when Jimmy was guest of honour at the St Joseph’s FC Dinner Dance. Photo: Noel Browne.

There was profound sadness when the news filtered through on Friday morning last that the fantastic St. Joseph’s clubman and former chairman Derek Power had died suddenly the previous evening, Thursday, September 9, at the age of 57.
A great stalwart of the Williamstown club down through the decades, where he brought the club back from the brink on a couple of occasions, and was a real driving force in securing the Williamstown Sports Complex as their home a number of years ago.
Derek put hours and hours of his time into making sure that the oldest club in Waterford remained in football through the good and bad times, and it was his passionate drive that saw the club begin an academy to make a return to Schoolboy football in recent times.
After serving many roles in the club committee down through the years, Derek was still a committee man where he was working behind the scenes in putting together a fundraising drive to secure new fencing for their pitch at Williamstown.

A GREAT FUND-RAISER
Down through the years with the like of the late John “Bubbles” Grant, the late Walter O’Mahony, and his good friend Christy Hannigan, they kept up the brave fight of keeping the club going when at times it would have been easier to throw in the towel.
Nicknamed “The Saint” for his trojan work for the club, Derek was never as proud when St. Joseph’s won promotion to the Premier League, and he put tremendous work in the 90th Anniversary Dinner Dance of the club back in 2013 where he acted as MC for the event.
He also loved attending Republic of Ireland International games at the Lansdowne Road along with Christy and others where he always had the best interests of his beloved Saints to the forefront.
A great fund-raiser, be it for club or in general, he was a former glasscutter at Waterford Crystal where he forged many great friendships, and after having a playing career with the Saints as well, he went back into the running of the club where he continued to serve until his sad passing.
After working recently with Hennessy’s Funeral Directors in Johnstown, and also with Bus Eireann, he also had a love of GAA and horse racing where he attended many meetings across the country with his friends and work colleagues.
Known for his quick wit, sense of humour, and as a storyteller, he also took pride in the achievements of his son Jack, who was a talented player with Villa, and he was immensely proud when he represented the Waterford Schoolboy League at the Kennedy Cup.
He was also a great supporter to his eldest son Andrew where he helped him in recent campaign in trying to become a member of the Waterford City Council, and he also treasured the time spent with his wife Annette, and daughter Niamh.

A PASSIONATE LOVE
If you were fortunate enough to be friends with Derek on Facebook, he made no secret of the fact that he idolised his three grandchildren Kayden, Layla Mai, and Lucy where you could see anytime he spent with them, there would be a picture to capture the moment. Those were treasured memories.
In paying tribute to their former clubman, St. Joseph’s said, “ Our deepest heartfelt sympathy goes out to Derek’s wife Annette, his children Andrew, Niamh, and Jack, his grandkids and all of his extended family.
“Derek was St Joseph’s to the core. He was family and a friend to anyone that has ever passed through our gates. He would go out of his way and do anything he could to help everyone of us in any way he could.
It was always you we would turn to in times like this, but this time it will be us who will look after you.
“Derek you were one in a million and all at the club will miss you terribly. You have left us all in deep shock and a dark cloud hangs over our club today. You certainly will never be forgotten. May you rest in peace. Derek Power – The Saint.”
Derek’s funeral was celebrated on Monday at the Sacred Heart Church, the Folly, where the St. Joseph’s club provided a guard of honour, with burial afterwards to St. Killian’s Cemetery, Ferrybank.
To his wife Annette, sons Andrew and Jack, daughter Niamh, his grandchildren Kayden, Layla Mai, and Lucy, his sisters Linda and Geraldine, his brother Noel, extended family, friends, and all at St. Joseph’s, to whom we offer our deepest and sincerest sympathies on their sad loss. May he rest in peace.