IN her trademark style on the heels of Normal People, Sally Rooney traces the bonds between friends and the changing landscape of the world and the self in her third novel, ‘Beautiful World, Where Are You?’ Alice goes to live alone on the West Coast of Ireland to write following a breakdown. Scattered across the country are her best friends, Eileen and Simon. Although the accolades for Alice’s writing continue to mount, success is worn uncomfortably by her. Each is unhappy in their own way, yet their struggles are too personal and too great for them to focus on each other, so they co-exist from a distance – self-consciously self-absorbed. 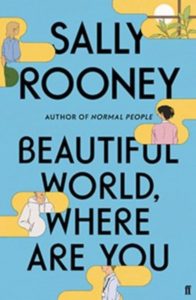 A little jewel at the heart of the novel is the regular email exchange between Alice and Eileen – a purging of the soul’s baggage and a discourse of the world’s fundamental issues. Singularly, they are a joy and some of Rooney’s best writing is to be found in the epistolary style.

“When we should have been reorganising the distribution of the world’s resources and transitioning collectively to a sustainable economic model, we were worrying about sex and friendship instead. Because we loved each other too much, and found each other too interesting. And I love that about humanity, and in fact it’s the very reason I root for us to survive- because we are so stupid about each other.”

It is through this epistolary exchange that Rooney explores questions of religion, climate change, ambition, and financial debt. Her exploration allows her to make the conclusion that the bonds we make and the journeys we take in life to further the forging of these bonds is all that matters. There is a selfishness inherent in prioritising love, sex, friendship, and introspective self-analysis over the future of the planet. Yet, Rooney’s characters, lacking in the main any belief in God, or any strong moral convictions, pursue connections because without them, there is nothing. The ‘here-and-now’ is prioritised, in many ways suggesting that we can lose ourselves to causes and ideals, forgetting that our relationships which make the journey worthwhile need our entire attention.

Much is made of ambition, and being able to say what contribution you have made to the world, particularly where writing is concerned. In fact, it is almost impossible to think at times that this is anything other than Rooney listening to her critics, self-consciously examining her space as a writer. Her characters are frustratingly old-fashioned, with both Alice and Eileen lost in their own sea of personal uncertainty, until they are saved, if you will, by a man. Alice is attracted to a person, irrespective of their gender, and she falls in love with a man who often seems more attracted to men. This is a largely unexplored area in literature, and it doesn’t work particularly well here because Alice hungrily eats up any nuggets of attention, while the man she is dating openly tries to engage with other men. The character development, and in particular the old fashioned narrative choices left me a little flat, ultimately not invested in the future of any of them.

It’s next to impossible to read a Sally Rooney book without unconsciously comparing it to Normal People, and the pressure of that knowledge was evident in her writing. Yet, it is a proud day for Irish writing when the most anticipated read of the year, and the biggest selling author this week is a young Irish woman, as pointed out by fellow Irish writer, Catherine Ryan Howard, whose newest title ’56 Days’ was knocked off the top spot by Rooney. It was an engaging read, with Rooney’s enviable language use, but it isn’t a book I will rush to re-read, unfortunately. Pick up a copy in The Book Centre.

Derek Lanigan: ‘Keeper of the keys’ at Gaelscoil na nDéise