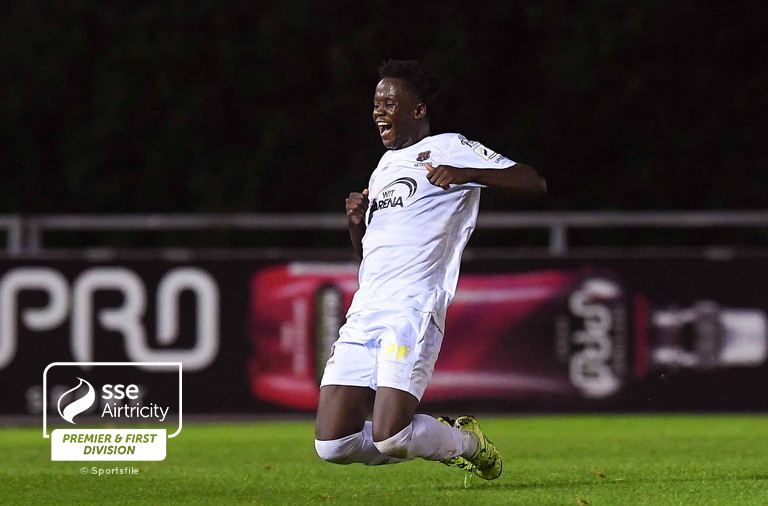 Prince Mutswunguma struck an injury-time winner as Waterford FC secured their spot in the final four of the Extra.ie FAI Senior Challenge Cup after a quite thrilling and nail-biting cup tie with UCD after they twice came from behind at the UCD Bowl last night.

Colm Whelan gave his side the lead that their early dominance deserved with his 20th goal in all competitions four minutes later when he left Greg Halford in his wake with a superb turn on the right-side of the area, and he gave Brian Murphy little chance drilling a right-footed shot to the far corner from 16 yards.

It was key positional changes that saw the Blues take control and they were deservedly level on 36 minutes when Junior Quitirna took advantage of some sloppy UCD defending to bring the ball onto his left-foot, and he beat keeper Lorcan Healy with a strike that found the bottom corner.

UCD were back in front at the other end on 49 minutes when Colm Whelan dispossessed Niall O’Keeffe on the left-side of the area after an initial slip from Kyle Ferguson as he went into an aerial challenge, and after Whelan released Liam Kerrigan out on the right, he drilled a low shot to the far corner past Brian Murphy.

A cracking cup tie had another twist on 66 minutes when the Blues levelled from the penalty spot when O’Keeffe’s long ball down the left saw Prince Mutswunguma fouled in the area by full-back Evan Osam, and Phoenix Patterson sent Healy the wrong way from 12 yards.

UCD were awarded a penalty of their own to regain the lead on 72 minutes when Jeremie Milambo upended Liam Kerrigan on the right-side of the area that left referee Rob Hennessy with no option only to point to the spot, and Colm Whelan saw his effort superbly tipped around the post by the fingertips of Brian Murphy.

With a replay looking certain at the RSC on Tuesday, there was one final twist in second-half injury-time when referee Hennessy waved play on at one end when Colm Whelan hit the deck that saw Greg Halford’s clearance pick out the run of Patterson on the left, and his cross was steered home by Prince Mutswunguma.

When referee Hennessy sounded the final whistle after an epic battle, the UCD Bowl erupted as the large band of Waterford followers were celebrating at the end of a ridiculous football match that even saw owner Richard Forrest join the Blues fans in celebrations. What a night in Dublin 4.