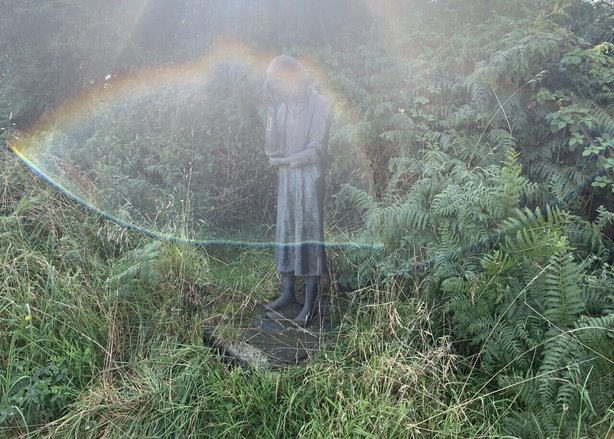 EARLY stages of an archaeological study of a large 2 acre field in Pulla, about 8km from Dungarvan, has revealed over 300 individual graves. It is believed that over 3,000 bodies could be buried in the old graveyard at Pulla. Field archaeologist, John Tierney is director of the Historic Graves Project and has been mapping the graves in the famine-era graveyard as a lockdown project.

Following funding allocation from the Royal Irish Academy, he began a began a Lidar (light wave-based technology, similar to radar) survey and drone camera study of the field at Pulla – about 8km from Dungarvan just off the N25 Youghal road.

Speaking to RTÉ last week, he said:”We were looking for two types of grave in particular; long graves and individual graves. Long graves, where we’ve seen them elsewhere, are related to famine overwhelmingly; large amounts of people dying and being buried in mass burials and then the small singles as well. What really surprised is that the Lidar showed the small single graves are highly detectable using the publicly-available data set.”

Many people living in the area would be aware of the presence of famine-era bodies in the field, but the actual locations have not been known until now, in a process which is still ongoing.

William Whelan, a historian with Waterford County Museum said it is possible that up to 3,000 people are buried in the ‘long’ famine graves as graveyards which already existed in the area at the time of the famine became overwhelmed.

Commenting on the study, he said “It’s hard to actually get across to people the scale of the disaster. We know that between 1845 and 1855 3,000 people died in the workhouse system in Dungarvan alone, that’s not counting any deaths outside of the workhouse.”

“For me as a local historian, a lot of it is just to be reminded of the scale of the famine. As communities we’ve forgotten how traumatic the famine was and this project is fantastic to bring it back into the public eye again.”

Next year marks the 175th anniversary of Black ’47 and Waterford Council are actively seeking to develop a schools’ project on the famine, incorporating some of John Tierney’s finds.

It has been confirmed that the upper area of the field contains at least 300 individual graves and in the lower section, long graves are contained from the famine-era- an area which still needs extensive work in terms of study.

Derek Lanigan: ‘Keeper of the keys’ at Gaelscoil na nDéise