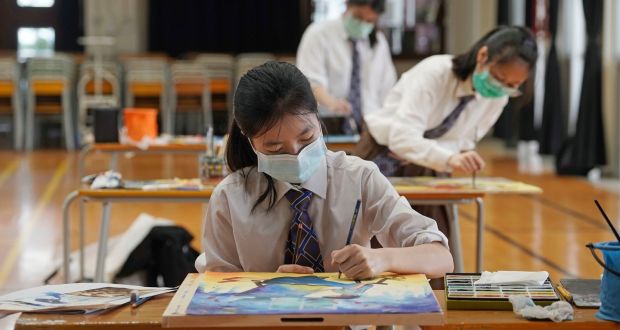 THE automatic contact tracing of close contacts in childcare facilities and primary schools (excluding special education facilities) will be discontinued as of Monday next, September 27.

In addition, from Monday next:

* The testing of asymptomatic close contacts in childcare facilities and primary education (not including special education facilities) will also be discontinued;

* Children aged 12 or under, identified as close contacts in childcare, educational settings, special education settings or other non-household settings and who are asymptomatic will no longer be required to restrict movements, unless indicated by the local public health team while

* Under 12s identified as household close contacts in household settings will still be required to restrict movements and get tested, regardless of symptomatic status.

However, the following public health advice remains: child aged 12 or younger who display symptoms consistent with Covid-19 should rapidly self-isolate and not attend school or to socialise until 48 hours after they are symptom free.

“Throughout the pandemic, we have done our utmost to protect our school communities from the serious risks posed by Covid-19,” said Minister Donnelly.

“The latest data indicates that schools continue to be a low-risk environment for transmission of Covid-19. As such, I am happy to be in a position today to announce these significant updates to contact tracing in our school environments.”

The Minister concluded: “If you have any concerns or notice symptoms in members of your family, the public health advice remains to self-isolate and arrange a test as soon as possible. You should not atten2d school, or work or socialise.”

However, the Irish National Teachers Organisation (INTO) believes such changes “should be deferred until reliable data on outbreaks in primary schools is available”.

In a statement issued in response to the Government’s earlier communication, the INTO described its weekly meeting with the Department of Education and public health advisors as “tense”.

A spokesperson added: “any change to risk assessments, contact tracing and restriction of movement protocols must be phased in and based on complete data on mass testing in schools.

The statement revealed an INTO-identified disparity between the official HSE figures which show over 4,000 children (aged 5 to 12) contracting Covid over the last fortnight, compared with the much smaller number identified in weekly school testing reports issued by the Health Protection Surveillance Centre (HSPC) since schools reopened.

“The HSE reported yesterday that between September 6 and 19 there were 4170 positive cases in 5- to 12-year-olds, yet the data provided by the HPSC covering August 29 to September 18 shows Covid detected in only 741 children after mass testing in 788 primary schools,” reads the statement. “However, two weeks ago, the HSE reported outbreaks in more than 800 primary schools.

“The INTO proposes that any changes should be made from Monday, November 1 when schools reopen after (the) mid-term break. This would allow time for better data to be obtained and sufficient time for considered analysis and to allow for the proposed changes to be implemented in an orderly fashion.

The spokesperson added: “Media reports that contact tracing of asymptomatic pupils identified as close contacts will be abandoned next Monday could cause mass confusion for school principals, staff, parents and children…

“The INTO is particularly concerned, given that it was acknowledged by the Department of Education today that there was a deficiency in the data obtained from mass testing in primary schools but were still proceeding to change Covid protection measures.”