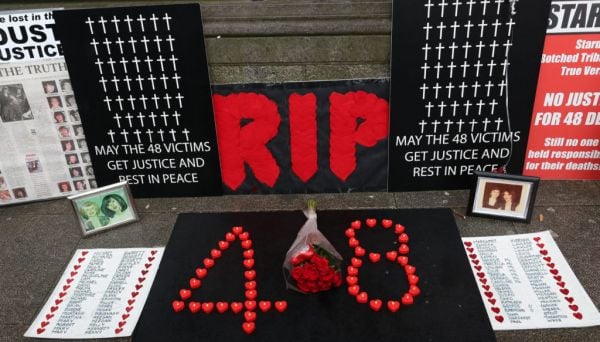 A fresh inquest into the Stardust fire is in doubt after it was warned that all but one of the 48 victims’ families could be excluded.

Labour TD Aodhan O Riordain has urged the Government to ensure the inquiry goes ahead as he warned 47 of the families may not participate amid a row overpromised free legal aid.

The Government has allocated eight million Euro for what is the third inquiry into the 1981 tragedy at the north Dublin nightclub which claimed 48 lives.

Mr O Riordain told the Dáil: “Nobody, certainly not me, wants an unseemly political row over what is an intensely traumatic and sensitive issue.

“The families, however, feel the funding has not been made available to their satisfaction.

“There is the potential for 47 families not to be involved in the inquest if things continue as they currently stand.”

This morning I read the names of the 48 victims of the Stardust fire into the Dáil record before my debate with the Minister.

Time for all obstacles to the establishment of the Inquiry to be removed and for the truth to the told.@48NeverCameHome @StardustPod #JFT48 pic.twitter.com/zLNlEw5BoF

A fresh inquest is being held after former attorney general Seamus Woulfe ruled it should take place in the public interest.

More than 800 people attended the disco at the popular venue and despite two previous inquiries into the disaster, nobody has ever been held responsible.

Mr O Riordain urged the Government to “ensure this inquest can continue and that we will not have any cloud hanging over it”.

He added: “We all want an inquest to begin and the truth to be found in good faith on all sides.

“What we do not want is to have a row over money, because money really is irrelevant when you consider the list of people who should still be alive today.

“All of them were young enough to be alive today. I ask the Minister of State, deputy James Browne, to make that case and for this to be resolved.”

Mr Browne, filling in for Minister of State at the Department of Justice Hildegarde Naughton, said the Government is committed “to ensuring that the Stardust inquests and the families involved are provided with all relevant supports”.

“Extensive work has already been undertaken. I understand that work will continue and the Legal Aid Board will continue to engage with the legal representatives of the families.

“Understandably, this is an extremely sensitive and tragic situation. I will bring the deputy’s concerns to the attention of the Minister of State.”

A sixth pre-inquest hearing is scheduled to take place on October 13.