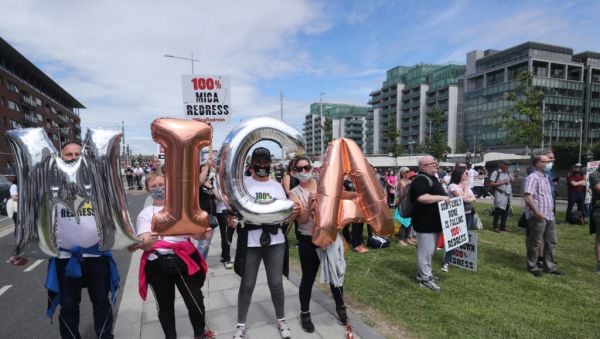 The Government has “ruled out nothing” in relation to its mica redress scheme, which is expected to be agreed in the coming weeks.

Michael McGrath said “everything is on the table” when helping homeowners whose properties have been destroyed by mica.

In a bid to allay the fears of thousands families whose homes are crumbling, the Minister for Public Expenditure said a “very significant enhancement and improvement” of the existing mica scheme will be agreed soon.

The Government has faced huge criticism over its redress scheme for homeowners whose properties were built using defective bricks containing excessive amounts of the mineral mica in Donegal, Mayo and other counties.

The Government must finally do the right thing and provide 100% redress for families whose homes are crumbling around them due to mica and pyrite – @PadraigMacL#MicaRedress #MicaProtest #defectiveblocks #100percentredress pic.twitter.com/wVIdeDdypH

The representative group have called for a compensation scheme that meets 100% of the costs.

Mr McGrath appealed to Donegal TD Padraig Mac Lochlainn not to “pass judgment” yet on the new scheme.

“The Government has put in place a process to try to bring about a resolution to this issue,” the Fianna Fail minister added.

“I have listened to the heartfelt stories from the families who are impacted and I can only imagine what they’re going through, and the worry that they are having to carry every single day.

“The main point I want to make is that everything is on the table. The Government has ruled out nothing in relation to what would be needed here to support those families.

“There is an existing scheme up and running, which was broadly welcomed at the time when the details of it were announced in January of last year, and it opened up for applications in June of last year.

“A significant number of applications have come in but the shortcomings of that scheme have also been highlighted.”

Mr Mac Lochlainn said families in the west of Ireland have been treated like “second class citizens”.

The Sinn Fein TD added: “This scandal has left deep scars in our community. It is agonising to see your neighbours, friends and family suffer in this way.