Well Said: Blawnin Clancy on her ‘natural place’ in art 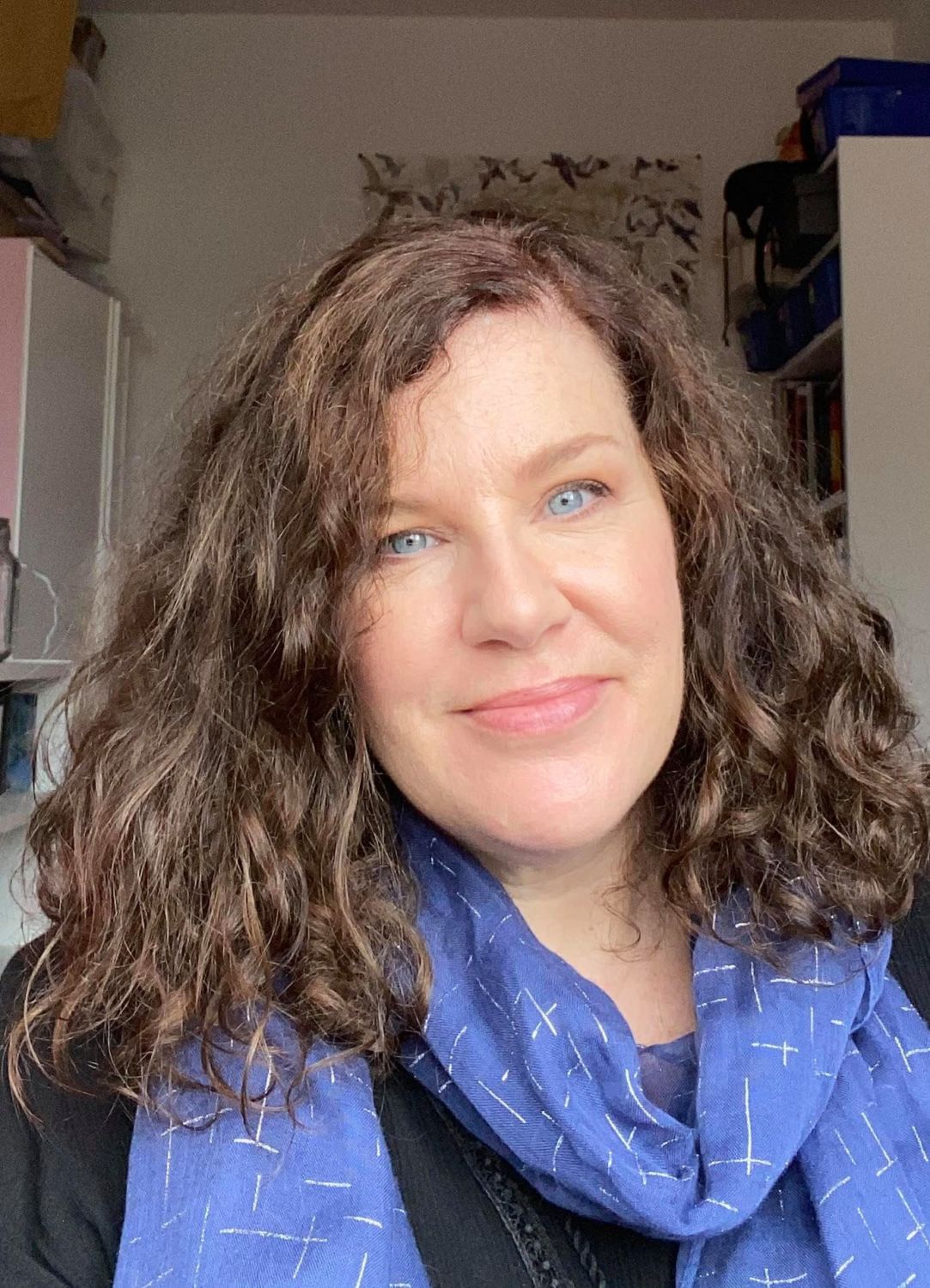 Blawnin Clancy works one day a week in Waterford city and is otherwise based in Dungarvan, an interesting dynamic for a visual artist.

IT’S a cats and dogs afternoon in Durand’s Court as I sit with Blawnin Clancy in her classroom at the Waterford (VTOS) Adult Education Centre.

As the rain teemed down between the Waterside and Parnell Street, there’s a palpable level of contentment emanating from across the desk where Blawnin sits against the colourful backdrop of her students’ work. Indoors and outdoors, there’s energy at work here.

“I work here one day a week with the students (all aged over 21), they come here for two years and they learn a whole bunch of different subjects from computers to drawing, to upcycling (working with furniture), interior design, working with colour, a bit of art history too – it’s a very rounded education,” said Blawnin.

“They get a bit of work placement as well – well, hopefully they will this time around which Covid prevented last year. But what we aim to do here is give people skills that are both new and useful to them, to put them to use at home, to start up a business with simple tools, with things that aren’t expensive, with things that are water based so you’re not going to fumigate yourself (!), making the best of things that are easy to use.”

Sister to Rayleen, and daughter of Joan Clancy (of the An Rinn Gallery) and of singer and actor, the late Tom Clancy (1924-1990) of Clancy Brothers fame, Blawnin grew up surrounded by creativity and possibility.

That the Dungarvan-based Blawnin has sustained a critically acclaimed career in visual art is, one could suggest, of no great surprise. But does she feel that such a path was utterly inevitable for her?

“I don’t know if it was unavoidable,” she replied. “I think there would have been support from my parents no matter what I went into but I think, for me, the creative side of things felt like such a natural place to go. It was something that had always been part of my life so going onto college (at Cork’s Crawford College of Art and Dublin’s National College of Art and Design) and doing it professionally was an easy step. It wasn’t a big risk or anything like that.”

Blawnin, who was born in New York (where she loved visiting art museums as a child), continued: “My father always encouraged us to try things, very much from the position of: what’s the worst that can happen? You fail and then you try something else. And I think I always had that attitude, to give something a go. Sometimes the best thing parents can do is allow their child the freedom to try something and just see what comes of it…

“A lot of young people now, going to college, getting points and all that stuff, it’s a big pressure. Maybe we don’t all have to know exactly what we want to do with our lives when we step out of school. And why not have a series of careers over the course of your life? You don’t necessarily have to be buttoned down to just one thing. If you yourself make something happen, that could lead to you creating your own job. It’s like that in art as well. Somebody might ask you to do an exhibition but there’s nothing to stop you from setting up your own thing and that’s what’s great about pop-up exhibitions, using shop windows and so on: sometimes you’ve got to be willing to go out there, try and see what happens.”

While the pandemic has severely impacted a vast swathe of the arts (theatre, live music, etc), Blawnin was not nearly so curtailed. “Online exhibitions helped while not really being a replacement for the real thing; it kept things going… but there’s no substitute for the in-person experience.”

When it comes to her own art, Blawnin (who has been drawn to work with embroidery and fabric of late) likes to catch the worm. 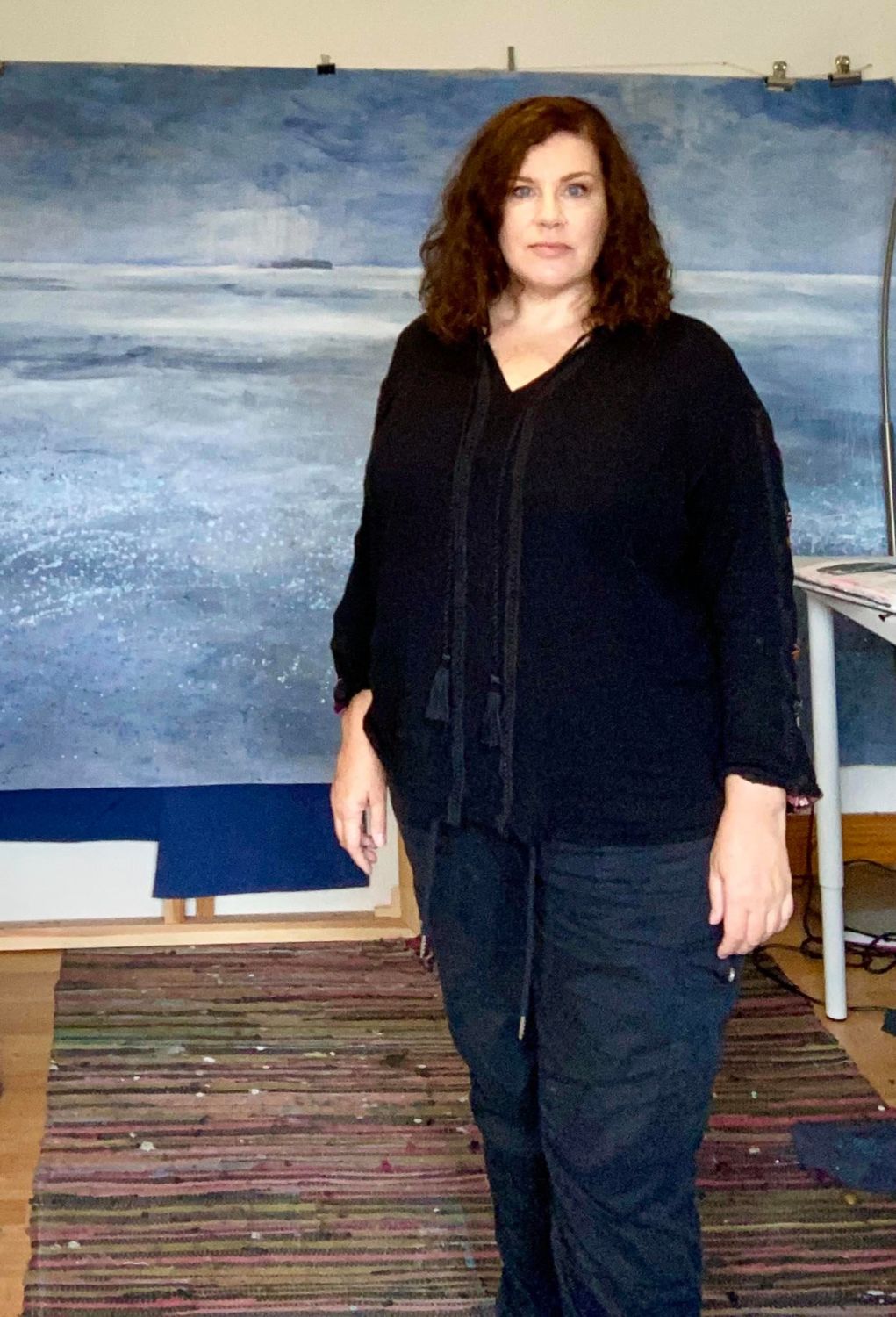 Blawnin’s work, according to her online biography, is “inspired by the natural world and travel; she has a strong affinity with water in all its forms”.

“Early morning up and until lunchtime is a great time for concentration and getting things done. I’d often get a three o’clock slump after lunch and if I work through that, I almost always realise that work is something I’ll ultimately re-do and I often get a second wind after seven where I still have that necessary level of concentration, albeit slightly different from the mornings.”

Exhibiting work, such as with Rayleen at Greyfriars in 2005, remains incredibly validating. “When you get exhibitions in places like that, it makes you feel that somebody must like what you’re doing! And selling work is another thing, not that it’s necessarily about selling work but when someone who doesn’t necessarily know you wants to spend their hard-earned money on a piece that you’ve worked on, it’s great. You don’t ever want to count your chickens so when it does happen, it’s always a nice surprise.”

Interestingly, Blawnin doesn’t feel a connection to any of her work to the point that she feels like she could never part with it.

“With my work, whatever it may be, I’m really interested in it while I’m making it, up until the point where I feel like now I’m done with it – and once it’s done, I really don’t have anything more to do with it. It exists as its own entity at that stage so I don’t get nostalgic about any of my work.”

As for what lies ahead? “Exhibition wise, there’s nothing pencilled in on the calendar right now… there’s still loads of stuff I’m interested in that I want to keep working away on – and I will. So I’ll create a body of work and then I’ll go and seek exhibitions for it when it’s all ready to go.” What’s next: now there’s a maxim that served many a Clancy well down through the decades.