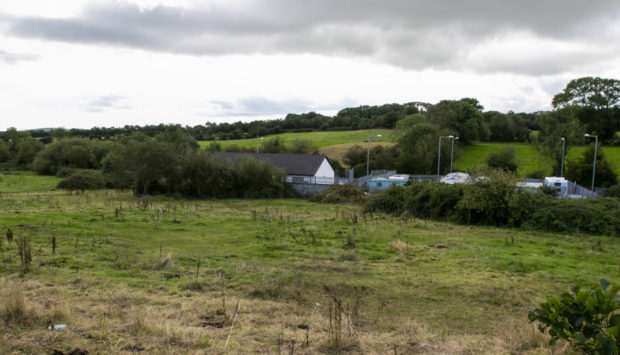 The site of new traveller accommodation near Kilbarry in the city.

The proposal attracted 52 submissions, which raised a number of issues with the plan, including the “increase in social housing in the area”, “possible future expansion of the Part 8 site”, ‘unauthorised settlement and unauthorised parking on Green Road and the wider area”, “current condition of Green Road”, “animal husbandry”, “WCCC management of halting sites and group housing”, “WCCC engagement with local residents association”, “increase in traffic” and “previous planning conditions and commitments”.

The plan was proposed by Green Party Councillor Susan Gallagher and was met by some considered questions by councillors, before it was given the green light. Fianna Fáil Councillor Eddie Mulligan asked if, as part of the plan, the tenants would be responsible for disposal of their own rubbish. This follows a Waterford News & Star story earlier this year which revealed that Waterford City & County Council were spending in excess of €70k per year removing rubbish from halting sites.

In response, Director of Housing Ivan Grimes acknowledged that the collection of waste was a “significant issue”.

“The Traveller community have told us that the rubbish found on halting sites is not exclusively dumped by Travellers and can be left by people passing by,” Mr Grimes said. “It’s a double edged sword for the council. We could say, “well you live there so you clean it up”, but that can lead to rodent problems, in particular in and around Kilbarry.”

Independent Councillor Mary Roche asked where the existing tenants would be moved to while the works were ongoing and also what the Council planned to do if caravans arrived and parked outside the site “in an attempt to extend it”.

Fine Gael Councillor Frank Quinlan said that if the plan is approved, the rights of the neighbours, and the people who made submissions, “would have to be respected”.

“It’s backing on to their back gardens and for the last 18 months all they’ve been listening to is parties, noises, sulkies, cars racing up and down the road… blocking off the Green Road altogether may actually avoid a lot of hassle once this Part 8 is built,” Cllr Quinlan said. “That said, I am in favour of the development, it will clean up the area and it’s badly needed. I just have reservations about what will come in to the area after it’s built because even if you look over at Carrickpherish – some Travellers are a law unto themselves, they don’t care, they do what they want and they think they’re untouchable. Nobody will say anything to them so there needs to be laws. Three strikes and you’re out if you don’t abide by the rules of the council.”

The original proposer, outgoing Green Party Councillor Susan Gallagher, said that the councillors needed to “watch how this development is discussed”.

“We’re talking about a very marginalised group of people,” Cllr Gallagher said. “Please keep that in mind. We have to provide decent accommodation for the Travelling people. They deserve it just as much as everybody else in this country.”

At the end of the discussion, the proposal to build the new accommodation was passed unanimously.