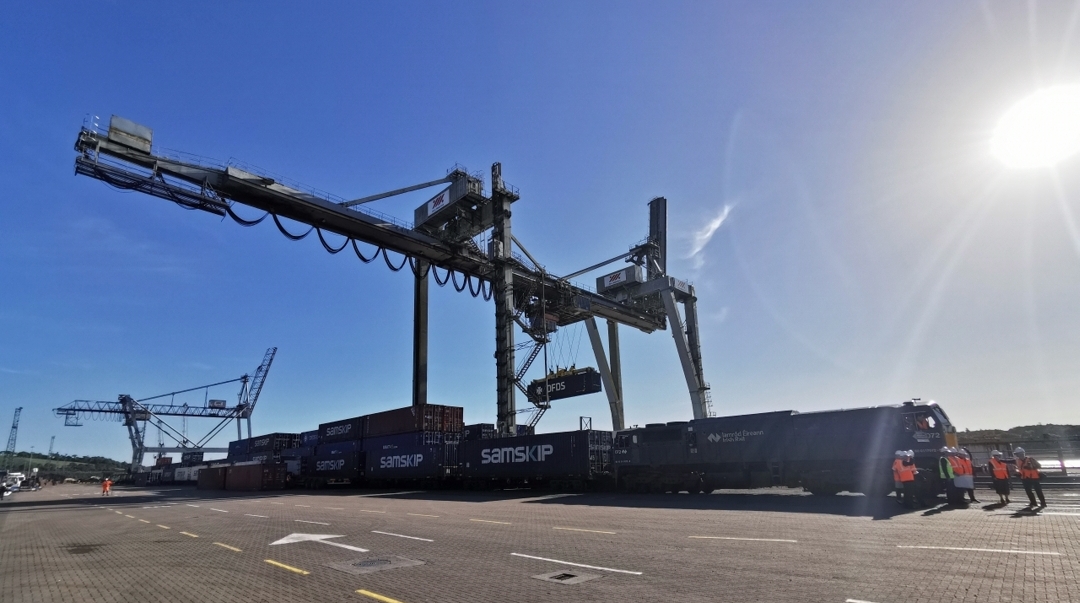 The new XPO/Irish Rail freight service from Belview to Ballina, pictured prior to departure from the Port of Waterford this morning.

A new return rail freight service connecting the Port of Waterford with Ballina officially rolled out of Belview this morning.

The new service, which is expected to build to twice weekly within the next two months, is a new collaboration between Iarnród Éireann (IÉ) and XPO Logistics, was launched in glorious Suirside sunshine.

Speaking at the launch, IÉ Chief Executive Jim Meade said: “We are entering a very exciting phase where rail freight can offer key solutions for the movement of freight as the country addresses both environmental and congestion challenges in this sector…Today’s announcement with XPO and Waterford Port demonstrates the viable opportunities that can be developed that will not just support industry and the logistics sector, but is also fully aligned with the country’s climate action plan.”

Coca Cola, which has a €200 million manufacturing plant in Wexford Town, are among the businesses which will be shifting its product by rail through the new service.

Mr Meade added: “This service, at its height, in line with what we currently predict with our colleagues in XPO, has the potential to remove 5,000 truck movements a year from road to rail with the resulting reduction in road congestion, and each movement reduces carbon (emissions) by 75 per cent.” 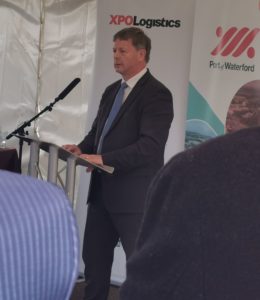 The rail operator’s “ambitious” new strategy, which runs until 2040, is due to be published in the coming weeks, said Mr Meade. “The plan will focus on enhancing connectivity with the ports, including here in Waterford, developing our network to meet the needs of rail freight and indeed developing an intermodal port network across the country as well.”

According to Port of Waterford Chief Executive Frank Ronan: “The excellent carbon emissions reductions we will achieve on this freight plus the alleviation of road and port congestion in Dublin make this a very worthwhile initiative. We wish XPO Logistics every success with this venture and look forward to working with them.”

Speaking on behalf of XPO Logistics (which is headquartered in the United States), General Manager Kelvin Bulmer said the company hopes to enhance its nationwide profile through the provision of this service.

“That there was a rail connection from the Port here was a huge attraction,” he said. “And we felt that there was potential to exploit the capacity that was there so we spoke to our customers and partners who could help us to deliver a solution. And two a half years later, we’re at the point now where can now operate the first train so thank you to everyone who has been a part of that…but the hard work in many ways starts now. We’ve got to establish the train, establish the route, attract new customers and grow the service.”

The new rail service between Ballina and the Port of Waterford will run in addition to existing transfer of pulpwood from Ballina and Westport to Belview.