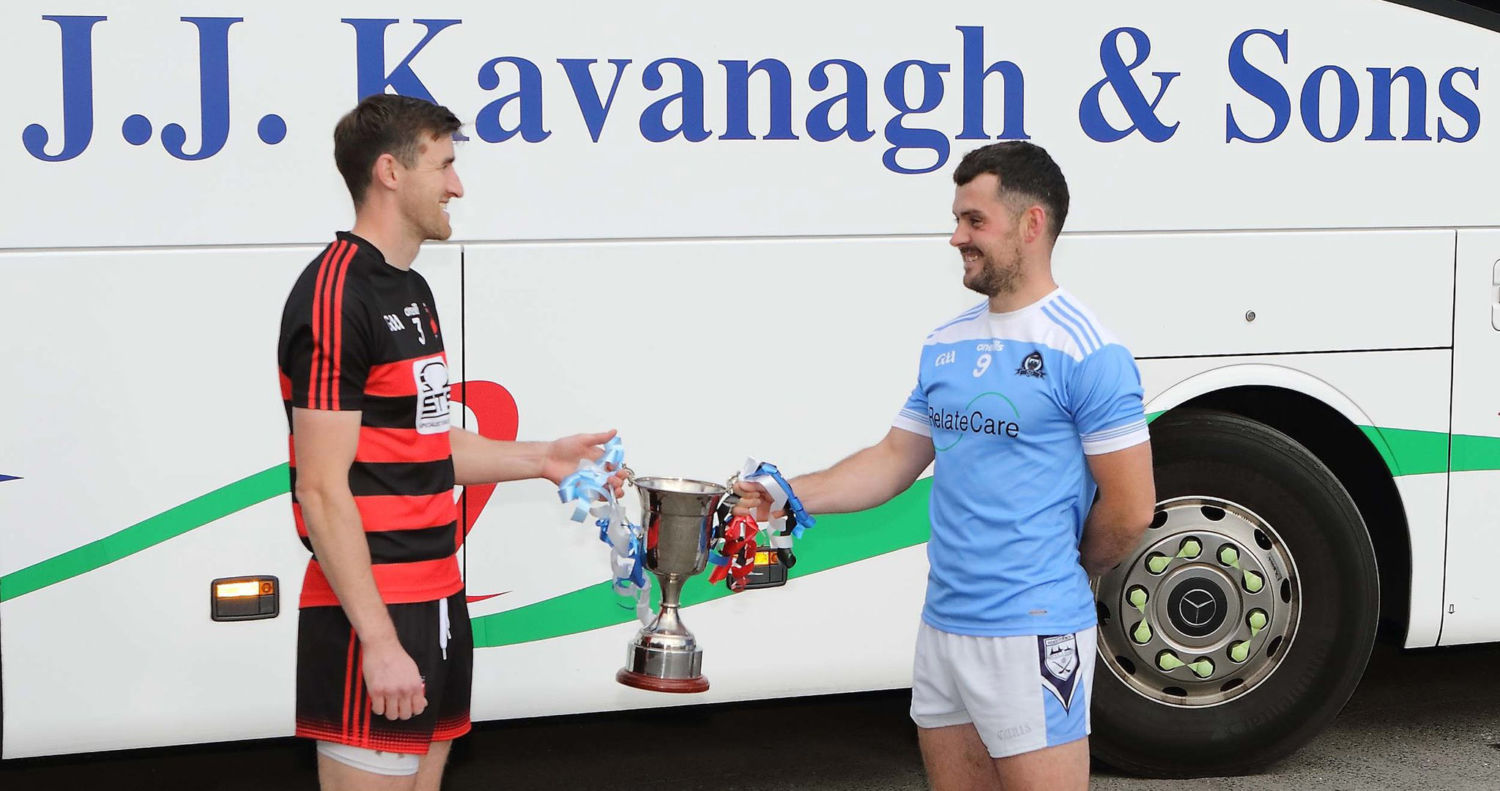 Ballygunner captain, Barry Coughlan and Gavin O’Brien of Roanmore with the News & Star Cup ahead of today’s Co. SHC Final.

They may not have been thinking of it as they put the shock defeat by Passage behind them when regaining the title in 2014 but that victory sparked a period of dominance in Waterford hurling that has seen Ballygunner coming just two titles short of matching a record of nine titles in a row shared between Mount Sion and Erins Own that has endured since Mount Sion matched Erins Own’s achievement in 1961 before being denied the outright record by the same club one year later.

AN UNIQUE FINAL PAIRING
An eight News & Star Cup win in a row for Ballygunner on Sunday would put them in touching distance of sharing the record but standing in their way is a Roanmore side very much with its own agenda and who have reached this final on merit and imbued with a self belief that they can create their own bit of history here with a long awaited third title success.
Ballygunner came perilously close to defeat against Mount Sion on Saturday last but their experience saw them remain cool under pressure and come through to a ninth successive senior final. Over that period Ballygunner have seen some great players of the noughties, such as Paul Flynn, Fergal Hartley, Wayne Hutchinson and Andy Moloney move on to be replaced by a younger generation coming through from a thriving underage structure in players like Ian Kenny, Barry Coughlan, Billy O’Keeffe, Peter Hogan and Dessie Hutchinson to join up with experienced campaigners such as Stephen O’Keeffe, Pauric Mahony, Shane O’Sullivan and Philip Mahony, the latter being a big loss through injury for Sunday’s final. More recent underage success has seen Tadhg Foley, Patrick Leavey, Michael Mahony, Kevin Mahony and Harry Ruddle making the breakthrough and all hungry to add to the club’s medal total.
Roanmore have had a more difficult road to Sunday’s final and their story is one of perseverance and belief in their ability to relive the past glories of the seventies and eighties when they were up there and competing strongly for county honours. After two decades of success, winning three minor titles there followed U-21 success for the club in 1981 and ’82 and from those successful teams followed the club’s first senior final appearance in 1987 when they lost out by two points in a replay to Ballyduff Upper in Walsh Park. Two years later the same two teams were back in Walsh Park for the final and this time Roanmore made no mistake with a 3-8 to 2-7 victory to take the title for the first time. An amazing rivalry between the two teams was continued the following year with Roanmore retaining the title in Fraher Field on a score of Roanmore 3-13 Ballyduff Upper 2-6 with the margin between the teams having widened.
That was Roanmore’s last final appearance and on Sunday next the links with those great days will be maintained as Billy and Brian Nolan take the field following in the footsteps of their outstanding father Eddie who played a huge part in Roanmore’s success as well as being an outstanding player for Waterford. Also, in the Roanmore line up will be Cian Wadding whose father, well known referee Michael, was a staunch defender on both Roanmore winning teams alongside John Ryan whose son Conor also lines out in the fullback line.

ROANMORE WILL RELISH CHALLENGE
Of next Sunday’s game itself, Roanmore will go in as rank outsiders and that is a situation they will relish. They have no big intercounty stars in their line up but they have shown themselves to be a well balanced and grounded side playing with a hunger and intensity to match anything coming against them. They have leaders on the field in Billy Nolan and Gavin O’Brien backed up by the experience of Frank McGrath, Chris Dempsey, Eoin Madigan, Emmet O’Toole and Brian Nolan. The introduction of Jack Chester to the goal has enabled Billy Nolan to contribute hugely outfield while Chester’s stature as a goalie has grown considerably in successive campaigns.
The big plus for Peter Queally this year has been the manner in which the players straight out of underage competition such as Conor Ryan, Rory Furlong, Ethan Flynn and Cian Wadding have slotted seamlessly into the scheme of things enabling his charges to operate as a team in every sense of the word.

GUNNERS HOLD THE ACES
On paper Ballygunner would appear to hold the aces here with their big name players being capable of holding the line as they did on Saturday last. Roanmore on the other hand are the side going in here with nothing to lose. They will not spare themselves from the first whistle and if Ballygunner fail to match them in terms of intensity they will be punished.
In the final analysis Ballygunner were given a rude awakening last Saturday in holding on for outright victory under pressure. They will be aware now that they can take nothing for granted. They have the ammunition to retain their title but they will have to dig deep against a Roanmore side that will come in with all guns blazing.