Dessie is already in the Ballygunner hall of fame 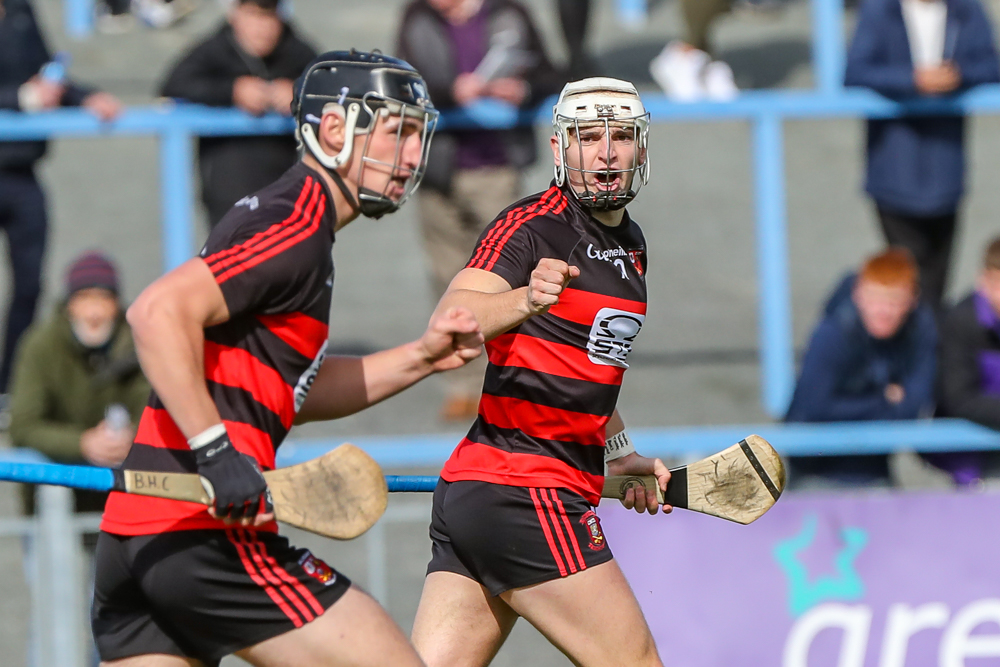 Dessie Hutchinson celebrating his first half goal against Roanmore in what was a brilliant display. Photo: Maurice Hennebry.

Anyone who was in Walsh Park on Sunday witnessed a county final performance for the ages. 1-9 from ten shots at the target. 1-7 off his left side, two points off his right.
It wasn’t just his first class finishing. It was his speed, his skill, his movement, his work rate. He was involved in the play 19 times. As well as his 1-9, he won two frees that Pauric Mahony put over, got one assist, put in two tackles and committed one foul. The perfect ten from the number ten.

Since his big switch from soccer to hurling, Hutchinson has scored 12 goals and 73 points in 19 games for the Gunners. 12-69 of that from play. 4-27 in 2019, 6-23 in 2020 and 2-23 in 2021. Nearly six points per game.
Bear in mind that he is faced with the best man marker the opposition have every day he takes the field. Conor Prunty, Thomas O’Gorman, PJ Fanning, Rory Furlong and Conor Ryan have all tried to contain him this season. Prunty and O’Gorman managed to keep him scoreless in the first half.
He has posted 11-63 in 16 Déise club matches and 1-10 in three Munster club outings. Sunday was the second time he broke double figures. He got 2-8 in the 2020 county semi final against Lismore (2-7 in the first half). His record in Waterford reads 16 games, 16 wins. Throw in two county final man of the match awards in three years. His only defeat came at the hands of Borris-Ileigh in the Munster final two years ago.

HUTCHINSON’S QUARTER
The man of the match presentation could have taken place at the first water break.
Hutchinson had 1-4 to his credit by then, all off his left side. Three points came from pinpoint passes into the dressing room corner as the Gunners took Roanmore sweeper Billy Nolan out of the equation. Hutchinson got out in front of Rory Furlong and converted each time. He also laid on a point opportunity to Mikey Mahony that he missed.
His fourth point was Ballygunner at their best. A line ball on the stand side by Billy O’Keeffe, back to Shane O’Sullivan, another back pass to Stephen O’Keeffe, up the bank sideline to Kevin Mahony and onto Hutchinson to pull the trigger.
Referee Thomas Walsh allowed a fair degree of physicality and Dessie got stuck in with an early tackle that knocked Dale Hayes to the ground. Back in more familiar territory, he took a pass from Tadhg Foley, sidestepped two Roanmore defenders and slammed the ball to the net.
At the start of the second quarter, he had Conor Ryan for company. He won a high ball from Pauric Mahony over the Roanmore number two and shortened the grip to flick it between the posts.
Ryan won the next two battles for possession but Hutchinson won a free off him in injury time that Mahony sent over. Dessie headed towards the dressing room with 1-5 beside his name.

SECOND HELPINGS
A minute into the second half, he got his first point off his right side. He beat Ryan to another foot race before he sent a ball inside to Mikey Mahony. No score came off it.
The man in the white helmet was out in front of Ryan again, turned and headed straight for goal. Dale Hayes had no other choice than to bring him to ground.
Three more points followed in the final quarter. One off his right from 50 metres, one off his left from the stand sideline and another from 60 metres. The loudest cheer came when the number ten appeared on the board with two minutes left.
‘Score, Score, Score’ was written on his left wrist on Sunday. That’s exactly what Dessie did.