If anyone deserves a shot at glory Moran does 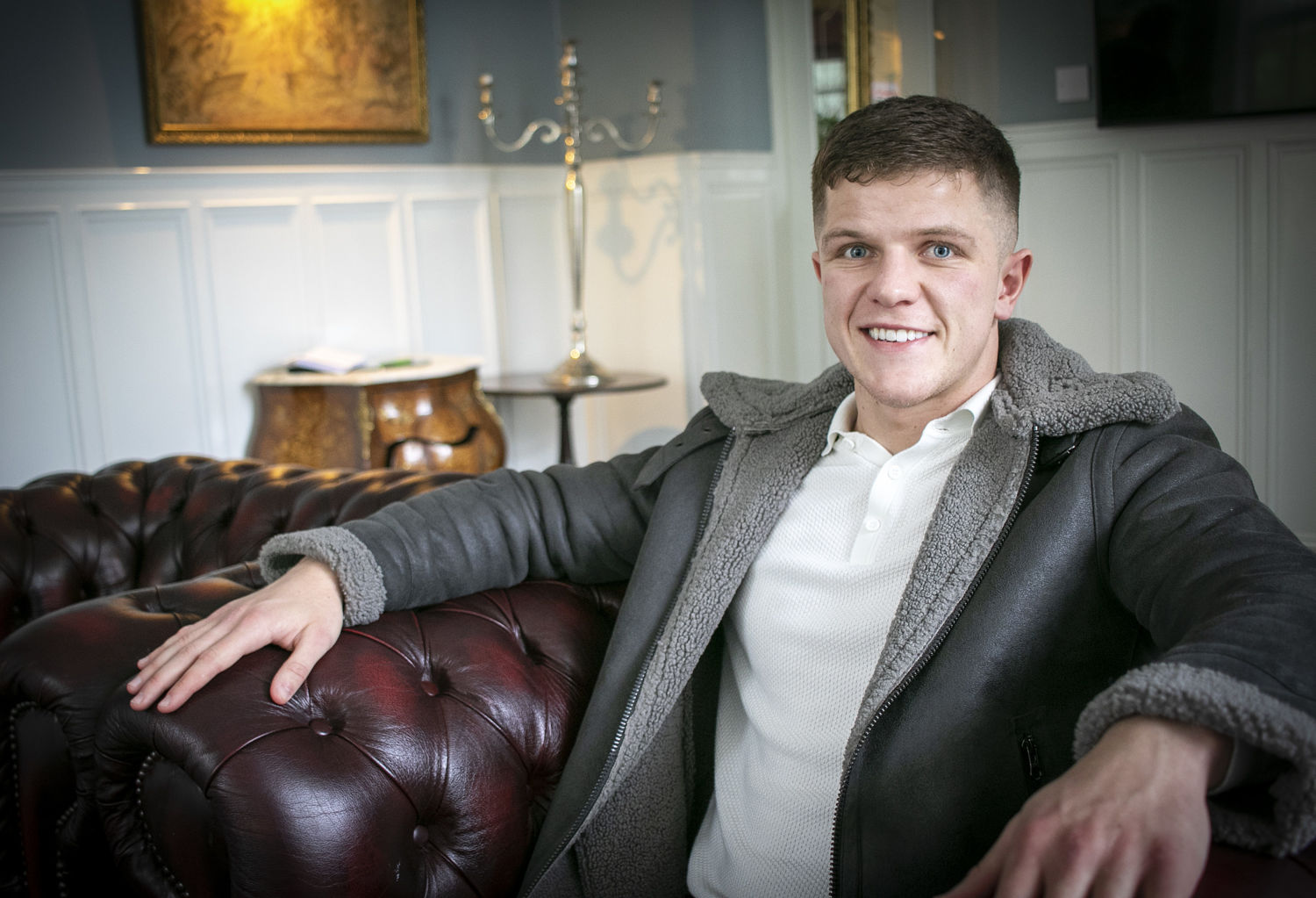 Kilmacthomas welterweight, Dylan Moran, has had more body blows than most out of the ring more than in it but like any true champion, he keeps coming back for more. He’ll soon be fighting on BT Sport. Photo: Joe Evans.

I’m probably preaching to the converted if you’re reading a sports column like this but isn’t sport great? We all love the stories of young and not so young sports people doing incredible things and especially underdogs – who doesn’t love a good underdog story? But of course anyone with more than a passing interest in sport will know that there are two sides to it. Winning and losing. For every winner there are hundreds, thousands and often millions of losers. For every Hollywood story of triumph there are thousands of stories of dejection and heartbreak.
Sport unfortunately can be as heartbreaking as it can be inspiring and joyous.
Therefore I love when sports people (or anyone in life) gets knocked down and gets back up again and then good things happen them. We in this paper, thanks mainly to our resident boxing fan and huge promoter of local boxing over the years – also known as our staff photographer, Joe Evans, have always tried to champion the cause of local boxing prospects and one of those has been Dylan Moran. We’ve followed the Kilmac man from a young age, through his Kickboxing career and into his boxing career and I think it’s safe to say that he’s followed a road less travelled. It’s seen a lot of highs and lows but it has never been dull, I think that’s more than fair to say.
A few years back Dylan looked certain for big things when he signed a deal with American promoters Star but that dream quickly turned into a nightmare after he suffered a heartbreaking first career defeat on his Star Boxing debut in July of 2019.
Dylan, never one to feel sorry for himself or lie down for long, just months later, found himself in Liechtenstein (of all places), signed up with PGB Promotions. After a couple of impressive outings he was just a month away from a massive ESPN televised fight in Germany, in July of 2020, when his promoters pulled out of boxing and cancelled all their contracts with immediate effect.
The news came like a bolt from the blue and speaking at the time an emotional Moran explained: “As of this morning the company I was signed with have pulled the plug on everything. They have gone bust. It’s not good news to get on a Monday morning, but it what it is. I have just been left on my arse.”
A lot, or most, people might have walked away after this latest body blow (pardon the pun) but not the Waterford man.
He fought twice in Spain late last year and early this year his profile received a serious boost when he was part of Conor McGregor’s training camp and he became embroiled in a public spat with American Youtuber/boxer Jake Paul. I’m sure none of this harmed his chances of his latest contract.
Then a few weeks ago Dylan (@pro_dylanmoran) tweeted, ‘Delighted to announce I’ve signed with the best in the business @frank_warren_official. A lifetime of hard work. Years of believing in something nobody could see but you. Well now everybody’s going to see it live on @btsportboxing.”
This really is a brilliant deal for Moran as Frank Warren (Queensbury Promotions) is one of the biggest promoters in sport and it now looks fairly certain that he will fight former British champion, Chris Jenkins, in the near future live on BT Sport.
He tweeted this week, ‘Ireland it’s been a pleasure. Officially back to Manchester today full-time and back in camp tomorrow. Time to clock in. Fight news soon.”
If ever you or your kids wanted or needed an example of how you pick yourself up after sport or life knocks you down then this is the man to take a lead from.
If hard-work and talent count for anything then this man deserves a bit of luck and hopefully this is the big break that his whole career has been leading to. Is the ‘Real Deal’ about to become a Real Star of the boxing world? I hope so. It couldn’t happen to a nicer chap. 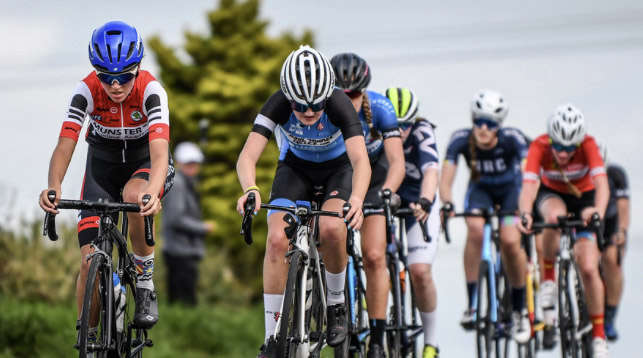 I’ve been delighted in recent weeks with the amount of local clubs contacting me to let me know of the achievements of their club members as the sporting world really kicks back into ‘normality.’
This week I received great news about two young local cycling siblings, Mia and Stella Smith, from the Waterford Racing Club.
They were very busy girls recently, competing in their respective nationals, and following that Mia represented the Munster Cycling Academy in the North West Youth Tour of England.
Up first was their Cycling Ireland Youth National races with both competing in the Time Trial, Road Race and Criterium Race.
In the Time Trial both sisters put in huge performances with speeds in both age groups hitting close to 40kmph average for complete distance, unfortunately both were just out of the medals.
Next up was the hugely anticipated Road Races. In Stella’s race it was fast and frantic from the start with girls racing very aggressively. It ended up in a bunch finish with Stella crossing the line in a fine seventh.
Shortly after Mia took to the startline for her road race, a combined U-15/16 girls road race, though Mia would be only competing for the U-15 title.
From the off Mia was very aggressive along with defending national Champion Aine Doherty. Eventually a break would be formed with four riders racing away, a very strong committed group.
In biblical weather conditions, the defending champion slipped away during the last lap and gained a 20 second lead. She would hold that and reclaim the title with Mia winning silver.
The following day it was Criterium time, a short 500 metre loop with four 90 degree bends on closed roads. In Stella’s race halfway through two riders broke away to compete for gold and silver, leaving Stella and two others chasing, she rode a fine brave race and came fifth.
Next up was Mia. After a slow start, missing the two rider attack that broke clear, it took Mia four laps to work her way up through the bunch trying to catch the leaders, although she got within 15 seconds of both riders she could not bring that time down further. A very impressive performance by all riders with Mia claiming bronze.
Following on from Mia’s success the previous weekend it was then off to England as she was selected to represent the Munster Cycling Academy that would compete against the strongest British riders in the North West Youth Tour. It was three stages over three days on closed roads, a Time Trial, a Road Race and a Criterium all with fields of 60 riders.
The Time Trial was held on the Morecambe promenade. Mia came home in a time of 5:26, 38th in general classification, 15 seconds from top 10 and 30 seconds from the winner.
The following day it was the Road Race, a 3.5km route held on closed roads just outside Lancaster that took in the infamous Daisy Bank Hill each time, with gradients maxing out at 15%.
During the first three laps Mia was always prominent. It was on the fourth accent of the hill that the strongest powered up the climb. They fractured the bunch into two groups of 24 and 12 with the rest of the bunch scattered all over the climb. Mia powered her way up the climb to stay with the second group on the road.
Those riders kept the pressure on racing very aggressively chasing the leaders, it was on the last lap that Mia and another rider broke free. Mia stayed calm and composed in the last 500 metres and went on to win her two up battle. Mia then moved up to 10 places to 28th on general classification.
On the final day it was the Criterium, again on safe closed roads, this race was going to be 75 minutes of frantic racing. The racing was unbelievably fast with speeds reaching 60kmph. Fighting to hold position as each lap passed, it wasn’t long before they got the bell for last lap. It was a reduced bunch finish with Mia moving up another spot on GC to 27th.
This was Mia’s first time racing abroad against a bunch of 60 girls. It was a hugely impressive strong performance, a huge confidence builder and she is eagerly looking forward to racing it next year.
Waterford Racing Club want to everyone at The Munster Academy in organising this trip, the parents that travelled with the squads ensuring it was a safe, very enjoyable and a hugely invaluable experience for all young riders.
Brilliant stuff girls and keep up the great work. 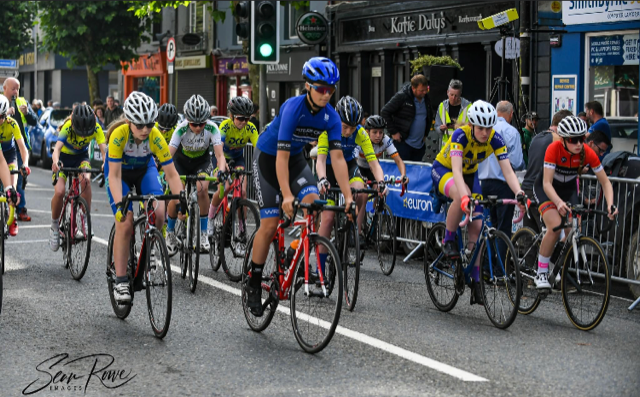 Stella Smith, centre in the blue, at the start of the Criterium at the National Championships. Photo: Sean Rowe.

“It’s going to be a massive occasion for the club”