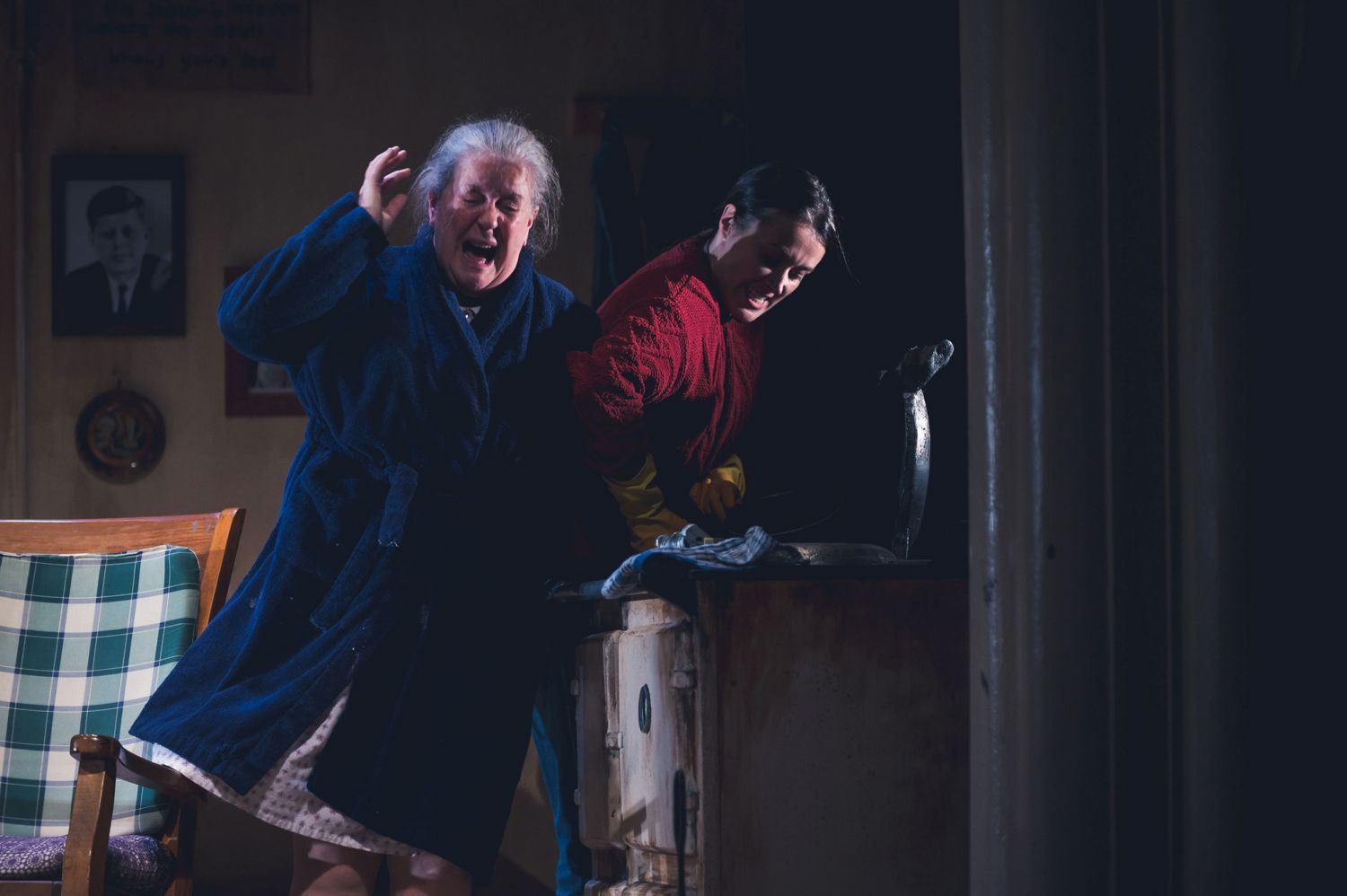 REVIEW: The Beauty Queen of Leenane at Theatre Royal

BITTER, frustrated daughter Maureen Foley (Sarah Madigan) and age-decrepit mother Mags (Marion O’Dwyer) have grown to hate each other. Loathing the circumstances that glue them together in an isolated, tumbledown cottage on the side of a steep hill on the edge of a town that offers neither employment nor community, Maureen and Mags have turned on each other.

In their grimy world of disorder, nothing matters. Conversations are repetitive and pointless and always drive towards verbal skirmishes where the winner takes nothing. It’s a daily war of verbal attrition. Mags bullies Maureen and, in the battle of cute-hoorism, reduces her to a skivvy. Constant demands, “be bringing me Complan, Maureen… soup Maureen… sugar Maureen… the Complan is lumpy, Maureen” have driven Maureen to despair. Maureen responds by deliberately making the vitamin-supplement Complan lumpy and cold, while Mags pours the contents of her night’s chamber pot down the kitchen sink without even running the tap – much to the audience’s horror.

‘Pato’s tender presence in the Foley cottage is a reminder of all that is wrong in this bitter micro-world filled with hate, recriminations and threats where sugar tastes like salt and love is truly a four-letter word’

And there’s a lot of horror about in Martin McDonagh’s tale of the vicious underbelly of rural Irish society as it stands on the edge of the Celtic Tiger years. Priests regularly thump young lovers, the guards break young fellow’s toes, youths peg balls and rocks at chickens, insults are roared and hands are scalded with boiling fat.

McDonagh’s script, in a lesser hands than Director Ben Barnes, could easily descend into Gothic horror. Ben, however, directs this savage mother-daughter psychodrama with pace and precision that focuses on the crucial mother-daughter relationship in its entirety. Behind the Gothic horror of the Foley family is the story of a mother in desperate fear of loneliness and helplessness, who manipulates her young daughter into believing that she is the only one who can care for her increasingly helpless self. But it’s a co-dependency that descends into bitter recriminations and violence. Nothing matters here… the weather, the temperature, the endless routine of Australian soaps on the portable black-and-white television that Mags feigns indifference to.

Maureen is 40 and trapped in Mags’s prison where endless and needless demands and cruel barbs are the bars that confine her. Making deliberately lumpy Complan and only buying her mother’s most detested biscuits are her only means that give her satisfaction and some semblance of control over her mischievous mother.

Until Pato arrives to offer her a home of her own.

Pato (Mark Fitzgerald) is home from England and has always had an eye for the beautiful Maureen. Despite Mags’s attempts to hide Pato’s invitation to an American Wake of a cousin, Maureen has the night of her life and brings Pato home for a night of unbridled passion with a genuinely kind man. Pato’s tender presence in the Foley cottage is a reminder of all that is wrong in this bitter micro-world filled with hate, recriminations and threats where sugar tastes like salt and love is truly a four-letter word. Pato’s kindness has no place in this world and Mags’s cynical and cruel revelations about Maureen’s previous incarceration in a mental asylum in England strike home.

Pato’s younger brother Ray (Tiernan Messit-Greene) acts as the go-between and, of course, frustrates the lovers’ plans, by failing to follow Pato’s explicit instructions to put his letters directly into Maureen’s hands. Ray’s selfishness and immature self-interest directly lead to the Gothic horror that unfolds.

Marion O’Dwyer’s Mags is excellent as the selfish, brutal, unfeeling mother that despises any semblance of maternal feeling towards her suffering daughter. Marion also gives sufficient hints around Maureen’s mental health to warn off any audience and potential suitor. Her triumphalism over Maureen is a tour-de-force that keeps the pot of conflict simmering and her inability to keep schtum is writ large all over this excellent actress’s face.

Sarah Madigan is superb as the victim-avenger that is a mass of contradictions. Vulnerable and vicious, tender and threatening, caring and cruel, Sarah’s Maureen holds the attention throughout. Madigan uncovers layers within Maureen’s character that show that her cruelty has been well-learned from her scheming mother and that her thirst for vengeance comes from deep within her disturbed self. The ultimate revelation of Maureen as the exact replica of her mother, sitting in her rocking chair, listening to Delia Murphy’s ‘Spinning Wheel’ on the radio is the perfect ending to McDonagh’s cottage-battle.

Mark Fitzgerald’s Pato is warm and tender as he brings some semblance of humanity and kindness to the Foley cottage and his letter-monologue is a profoundly moving and unassuming piece of theatre. Tiernan Messitt-Greene brings great fun and mischief to the selfish and somewhat modern younger brother Ray, while his constant allusions to an underbelly of violence and needless cruelty keep the pot of conflict simmering.

These are exciting times for theatre again in Waterford with lots more on the near horizon. Four Rivers is a new theatre production hub serving theatres and arts centres in the South East of Ireland. In association with Theatre Royal Waterford, supported by the Arts Council, Waterford Council, Wexford Council and Kilkenny Council.