Another day in the Rising Sun for Lafcadio Hearn Gardens 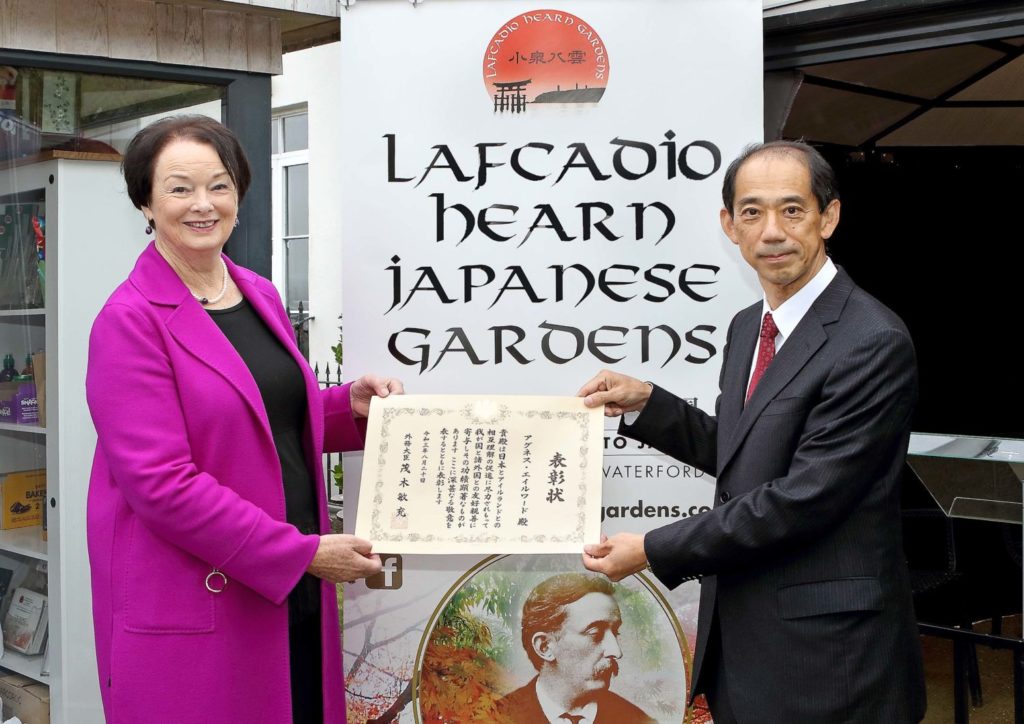 THE founder of Lafcadio Hearn Japanese Gardens received a significant Commendation from Japan’s Foreign Minister for her dedication to establishing the stunning amenity on Tramore’s Pond Road.

At the ceremony, Agnes Aylward told the Waterford News & Star that this welcome recognition, presented by Japan’s Ambassador to Ireland, Mitsuru Kitano, could not have been realised without team work.

“I’m delighted and surprised to have received such an acknowledgement but I’m really pleased because it means we’ve done the right thing,” she said.

“When we set out on this journey, we were afraid that we mightn’t strike the appropriate cultural tone for these gardens but thankfully, in receiving this welcome recognition, it’s clear we got things right here so it’s a great day for us all. It’s one thing having an idea but to make it happen, you need help – you can’t do something like this on your own. And we’re very lucky that so many in our community rolled in here.”

Ms Aylward continued: “After the first year here, we had no employees – we had two in the garden – but we had nobody to run the business, to bring in people, to welcome them, to sell tickets, all of that. So all of that was done on a community basis; we got a table given to us by McCarthy’s (Builders Materials store in Riverstown) and an umbrella to keep the rain off us – and a cashbox we bought in Cahill’s and that’s how we started! Goodwill set us on our way and we’re delighted with how these gardens and their promotion has since developed.”

Addressing the gathering, Ambassador Kitano said the decision had been made “in recognition of Ms Aylward’s outstanding contribution to the promotion of mutual understanding between Japan and Ireland. I am delighted about this wonderful decision because I know first-hand of her dedication and contribution”.

Ambassador Kitano added: “Ms Aylward is soft, but determined. She has a strong will to make an idea into reality. She took the idea of re-developing the sloping location with a magnificent view to create the Lafcadio Hearn Japanese Gardens and, through her efforts, they came into existence…

“Since opening, there have been additions, such as the Summer Pavilion and Japanese Tea House. The Japanese Gardens where we are all gathered together here now are the result of all Ms Aylward’s dedication and contribution. I would like to congratulate her on this commendation from the bottom of my heart.”

Guests arriving at the ceremony were greeted by children from the local Educate Together school waving Japanese flags, while violinist Cathy Desmond provided musical accompaniment.

Ms Aylward acknowledged that many domestic tourists had visited the gardens during the pandemic’s staycation/restriction period.

“A lot of Irish people who would normally have holidayed abroad made their way here, which was very welcome,” she said.

“We were beginning to develop a good foreign visitor market which of course disappeared but that was more than compensated for by the Irish people who visited. Our visitor numbers didn’t fall; I’d say we’re probably up on last year by now so yes, the circumstances of recent months have, from a visitor perspective, been good for us. And when the Covid (restrictions) are over, we have coach business lined up to come to Tramore – from Germany, Denmark and England – high spending visitors who love to travel to see new gardens.”

With an eye on future developments, the soon to be vacant Educate Together building which opens onto the garden would make a fine fit for the Lafcadio Hearn Interpretive Centre, a point Agnes Aylward referenced during her speech.

“It would be very welcome to secure that building when it becomes available because it’s on the side of the garden,” she said. “It’s an ideal place and it’s completely logical… I’ve spoken to the Council CEO about it but there’s a whole lot of people that have to get involved and a whole chain of things that have to happen first.”

To coincide with last Friday’s ceremony, Ambassador Kitano also unveiled a bronze plaque, set in granite, to honour the visit of Japan’s Princess Takamado, adjacent to where she planted a Japanese Cherry Tree back in July 2017.