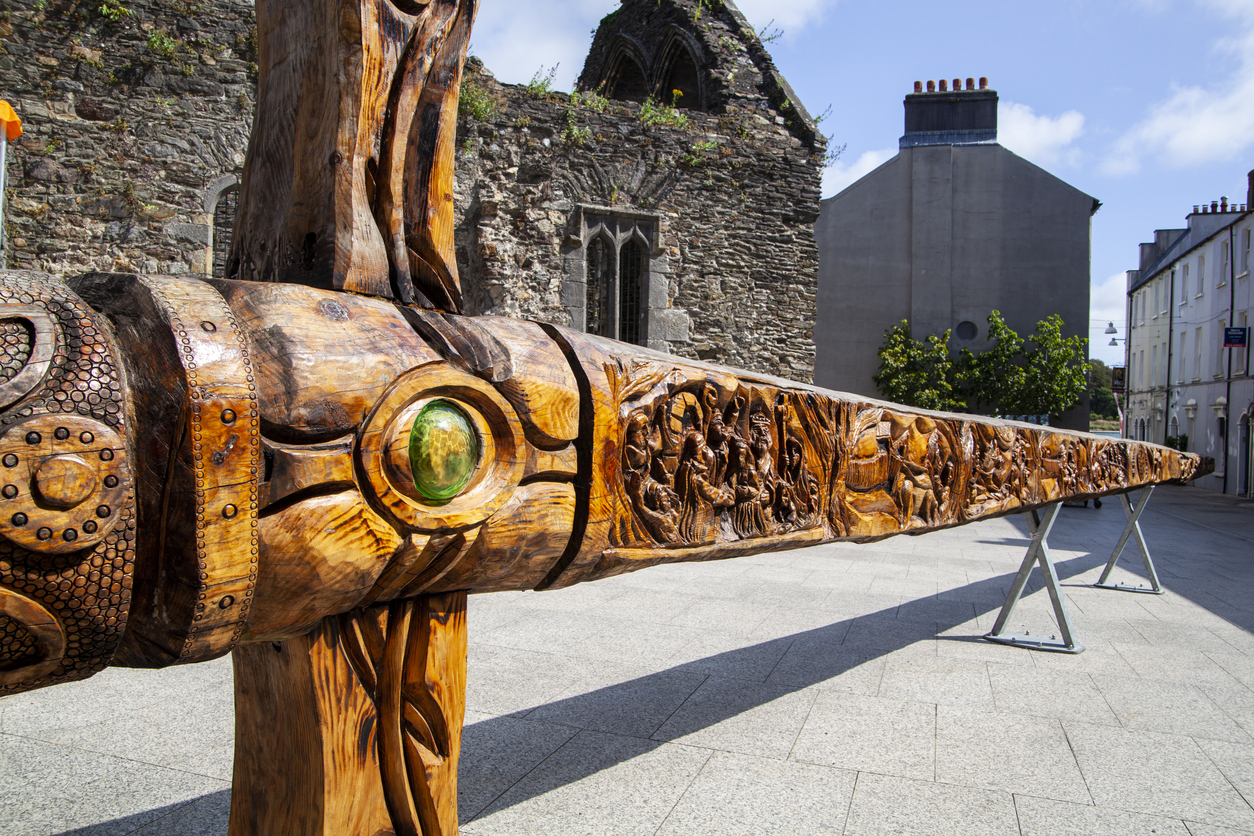 Waterford’s ‘Dragon Slayer Sword’. ‘Can we deliver as a regional city when our once peer cities already have the means in medicine, education and FDI investment to succeed while we have not?’ asks Phoenix.

PEOPLE are glad that Marc O Cathasaigh and John Cummins are teachers as these two decent young men will have something to fall back on should local politics turn against them in the next general election. They may not be alone, hence our FF TD battening down the hatches in West Waterford with Micheál Martin recently. For how could it be otherwise after the National Development Plan was published last week? Up to now the direction of travel of all government policy has been to make Dublin bigger and not, as one might hope, to make Ireland better. Is the Cork Plan a reaction to that?

We have been reminded ad nauseam that the plan is not a prescriptive list of things that the government intends to do but is more an aspirational list of things that should be done. People are honestly wondering what kind of plan is published, when one of its main proposers, Eamon Ryan, broadly hints that many projects may not be completed. But then it’s all politics, or at worst, all words, as a government which has abjectly failed to deal with a housing crisis and control costs on major projects announces its aims in spending a possible €165 billion over the next decade or so.

‘Listing us among the cities is great, but can Waterford compete with Limerick or Galway without an equity of resources which has never existed?’

The NDP contains 180 pages of aims and ambitions, much of which most people could approve. We all want sensible action on climate change and on creating a more equal and balanced country. Cold feet emerged early on when reading examples in the Plan of projects which have already been delivered around the country. Remember the Plan is called “Project Ireland 2040, National Development Plan 2021-2030”and the Waterford example it chooses is the Greenway, described in the plan’s words as “Contractor Procurement 2014/2017, Project Completion 2017”.

It’s literally and metaphorically an historic achievement, already four years old but still not finished into the city! The Plan ironically indicates that project finance was provided, €16m by Waterford City and County Council with €5m from government. It is extremely difficult to find such a skewed funding model anywhere else in the 180 pages of the Plan document. This was money taken from the relatively poorest city, with the highest unemployment and lowest level of state funding in the country. Readers may remember the development of the Pálás Cinema in Galway cost some €10m, with €9m supplied by government. For a picture house!

It is hard to escape the notion that the Greenway was a token Waterford inclusion. We are continuously listed with Dublin, Cork, Limerick, Galway and Waterford and are included in the list of cities where worthwhile projects will hopefully be achieved in the Plan’s lifetime. Landmark projects include the development of the Cork Docklands, Limerick 2030, the development of SDZ’s in Waterford and Dublin, a number of key infrastructure projects in Galway and the regeneration of Dublin’s Inner City. Some of the projects approved to date involve URDF support exceeding €100 million. Waterford still has city status, so they can’t leave us out I suppose. It’s nice to be mentioned, but is our city status realistic or is it an oxymoron, a contradiction in terms at this stage? Can we deliver as a regional city when our once peer cities already have the means in medicine, education and FDI investment to succeed while we have not?

Some of the other examples mentioned in the Plan underline the difference. Remember CUH’s new oncology wing €51m, Luas Cross city €380m, Grangegorman DIT (TU Dublin) campus with €500m for 22,000 students and 2,000 staff. We can only dream of such spending in Waterford. Is the miserly €14m in the HSE 2021 Capital Plan for Waterford a truer indication of the level of government support for us? Much seems retrospective or underway. The Dunmore Wing already built with huge input from local funding, the cath lab underway, an Ophthalmology theatre at tender. Has the Plan a deliverable vision to develop Waterford as a competitive regional city with a proper Model 4 hospital with staff and funding equivalent to Limerick UH? In the absence of a full university designation (sought since 1939) in Waterford, the Plan says, “Work is progressing to identify campus development needs for the proposed Technological University for the South East of Ireland, including an expanded campus footprint in Waterford.”

But where is the thrice delayed new WIT Engineering block? Deferred for possible construction to 2023? When was the last new company IDA/FDI announcement for Waterford? Are plans for a 50/60% population growth in Waterford to 80,000, achievable without the state support in medicine, education and jobs afforded to other cities? Where is funding for our airport or port? Or for a new Garda Divisional HQ? Listing us among the cities is great, but can Waterford compete with Limerick or Galway without an equity of resources which has never existed?

A Fine Gael social media post unwittingly encapsulated the problem: “Over the past 12 months I have worked tirelessly to ensure the N24 (Waterford to Limerick road) was retained in the NDP. Its inclusion is hugely welcome news and while public consultation, route selection, feasibility, design, planning and procurement will take a number of years, it’s great to see this project moving forward.” Of course it is, but as Eamon Ryan says, it may not even be completed! We well know the endless, soul destroying steps that Waterford projects have endured. The preliminary design, detailed design, planning permission design, tender stage design, delay design, waffle design, postponement design, the review design? Or even the f**k up the project “design” from whatever government Department is involved?

We have had a Sláintecare Health Plan for years. As soon as its possible implementation seemed likely to undermine mandarin power in the HSE or Dept. of Health, the plan began to self-destruct. The announcement from Minister for Health Stephen Donnelly of a new Sláintecare committee being created to decide on health regionalisation, headed by his Secretary General Robert Watt and HSE CEO Paul Reid, tells you much that you need to know about decision making and plans in Ireland.