Tower Hotel make their next move 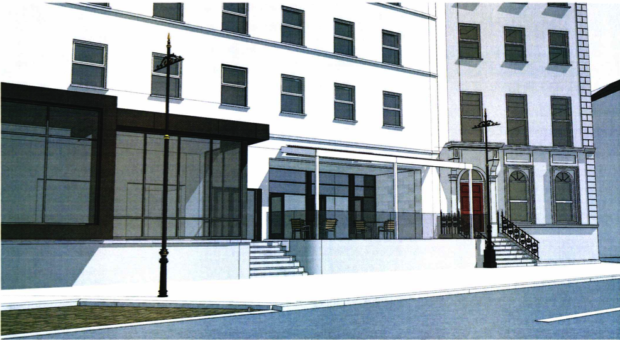 The Tower Hotel’s latest planning application contains a revision to the front of the building to include an outdoor terrace next to the protected 36 The Mall, which will be retained.

NEVILLE Hotels, owners of the Tower Hotel on the Mall, have returned to Waterford City & County Council with slight revisions to their original plan to expand their hotel with additional rooms, outdoor dining areas and a conference centre. However, they have not addressed the Council’s request for them to retain the facades of No’s 16-20 Lombard Street.

This time around, the group have focused primarily on the demolition of the rear of these buildings as well as the demolition of an existing two-storey laundry, kitchen, service yard and some associated spaces. The new plan also includes some alterations to the front elevation of the Tower Hotel, including the construction of a new outdoor terrace with retractable awning and glazed balustrade beside the protected No. 36 The Mall, which would be retained. They have reiterated once again that because of the conflicting floor levels of the five buildings on Lombard Street as well as their window fenestrations, it would be “impossible and economically unviable” to integrate the structures into their conference centre plans. 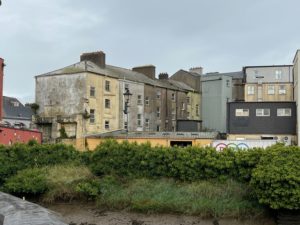 The rear of No’s 16-20 Lombard Street, which will be developed as part of the Tower’s latest plans.

Interestingly, a pre-planning meeting was held between the Tower Hotel and Waterford City & County Council on September 13, presumably to discuss how both parties could get past the ‘Lombard Five’ problem. Present at the meeting from the Council’s side were Hazel O Shea, Executive Planner, Michael Quinn, Director of Roads and Services, and Liam McGree, Senior Planner. According to Neville’s new application, the “principal of the scheme and rationale werepresented” and “broadly accepted and considered to be in compliance with the Planning and Development Standards”. They added that the “various options for 16-20 Lombard Street were still being considered in light of the recent planning refusal”.

The new plan also alluded to a new three-storey car-park, allowing for 148 cars, which would form part of “phase three” of the hotel development.