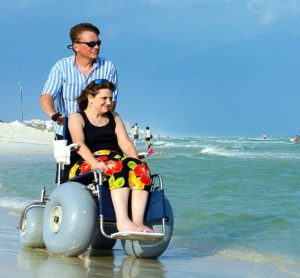 The beach wheelchair proposal will be raised at the October Plenary Meeting.

AN idea that has been proposed more than once at Waterford City & County meetings is once again being pushed to the fore, by independent TD Matt Shanahan and former councillor Blaise Hannigan.

“Myself and Blaise, who is a well known community activist in Tramore and always has been, before and after local politics, have been reviewing accessibility to beach areas in the county when the problem of access for wheelchair users became apparent,” Deputy Shanahan said. “Wheelchairs that are not ‘purpose built’ have great difficulty in being rolled along sand and stony areas. It is almost impossible for the user or any person attending a user to bring a conventional chair safely onto the beach for the purpose of enjoying what so many of us take for granted – time spent close to the shore or on the beach. From looking at the problem and speaking to both wheelchair users and representative groups it became apparent there are already existing specified beach wheel chairs in place in some other coastal counties which are managed through the beach life-guards service.”

The next step is for the issue to be raised at this afternoon’s (Thursday, October 14) Plenary Council Meeting to see how such an initiative for Waterford’s Blue Flag beaches could be developed and have written to the council to that purpose.

“The Irish wheelchair association have been contacted and are supportive of such a programme in Waterford,” Deputy Shanahan said. “If the initiative was approved a first lot of wheelchairs could be designated for county blue flag beaches capable of navigating all of the main access areas for 2022.”

The proposal would enable families to take responsibility for managing their users in the chairs, which would be available to reserve through a website booking. According to Deputy Shanahan, if the scheme were to prove popular, “further initiatives might be developed to allow for hoist access for those with minimal mobility to access the beach”.

“This would require dedicated and qualified healthcare personnel but there are chairs available internationally that allow wheelchair users to swim in the sea safely with attendants – what a wonderful gift a swim in the sea would be to somebody confined to a wheelchair,” Deputy Shanahan added.

Both Deputy Shanahan and Blaise Hannigan told the Waterford News & Star that they are confident that Waterford Councillors will “resoundly” endorse the initiative which they say will further highlight Waterford’s inclusivity and tourism offering.