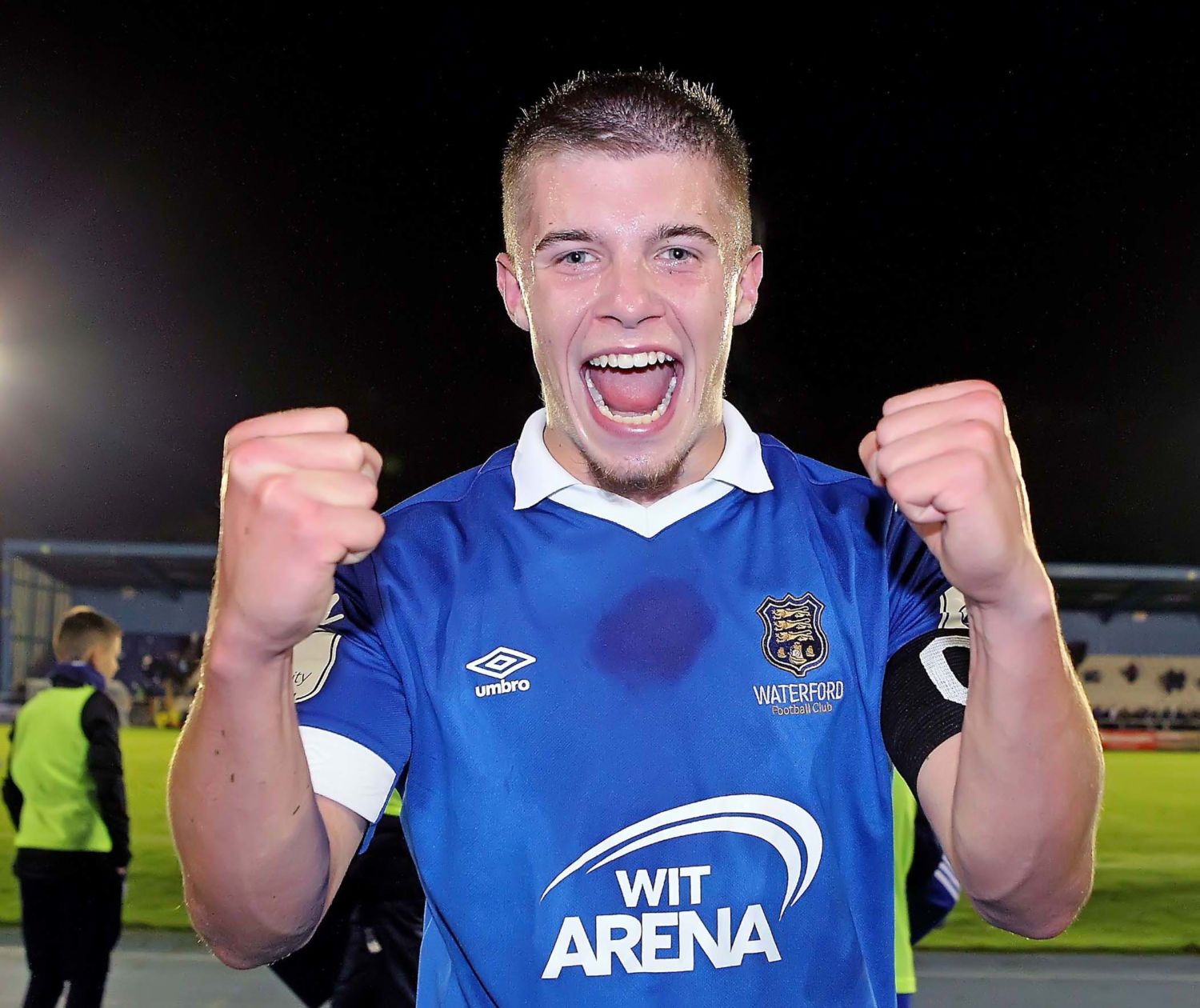 The RSC erupted into a scene of celebration when Cork referee Graham Kelly sounded the final whistle as Waterford FC, thanks to two injury-time goals from John Martin and man of the match Junior Quitirna, picked up a big three points in their survival bid with a win over Finn Harps.
It was a crunch game in the relegation playoff battle with the result in the balance going into the seven additional minutes, but that all changed through Martin and Quitirna as the Blues finished strongly with only ten men after the second-half sending off of Brian Murphy.
Blues boss Marc Bircham lauded his players after the game for the energy, commitment and attitude shown in securing a massive result that leaves the club just a point behind Harps, three behind Dundalk, and four behind Drogheda in the race to avoid the playoff after Longford Town were relegated on Friday night.

TOTAL TRANSFORMATION
Waterford have managed to pick up a total of 23 points from their last 33 available in the league, which is incredible when you consider the fact that they were in serious trouble before the arrival of both new owner Richard Forrest and manager Bircham.
In fact the current club captain Niall O’Keeffe couldn’t even get into the starting team during the spell of Kevin Sheedy and Mike Newell, but now the Waterford man is a leading figure in the Blues camp, and he expressed his delight at the result.
Speaking after the game, O’Keeffe said, “It’s an unbelievable result for us, a fantastic atmosphere, and I’m delighted that we managed to get the result. I didn’t see one empty seat in the Waterford end, and it was unbelievable atmosphere from minute one. We’re lucky to have them.
“It was a tough game but we started well. We had a game plan, and they had a game plan, but I think that the goal that we got settled us into the game. It was vital we got the goal and it was good for us to be going in at half-time.
“We said at half time that we wanted to do and I know that Murph is unlucky with the red, but to see the quality that we have in the team, we’re after scoring two crucial with ten men. I think that showed the quality we have throughout the team.”

MEMORABLE GAME
“Shane Griffin has been brilliant for us, and he ran his legs into the ground. I think when he ran the length of the pitch in the first-half to stop Tunde, who was clear on goal for them. It was a massive interception at a crucial stage of the game. He took the bullet for us when Murph was sent off, and Matt was unlucky with the penalty. It was a real team effort, and we’re delighted with the three points.
“I think when Murph got sent off, it was down to the experience of Greg, Woody, and Eddie that really came to the fore for us. It settled us down, and you can see the quality we have with the lads, and you see the goals that they got. It’s different quality and we’re lucky to have Phoenix and Junior in our team.
“I would 100% say that this game was the most memorable match of my career to date. Definitely. For the sheer numbers that got behind us, how loud it got from start to finish. I don’t think I’ve seen anything like it even back to the days when I was sitting in the stand. I don’t have words for it, it was brilliant.”

Report, more reaction, analysis and loads of great pictures of this game in this week’s Waterford News & Star, in shops now.