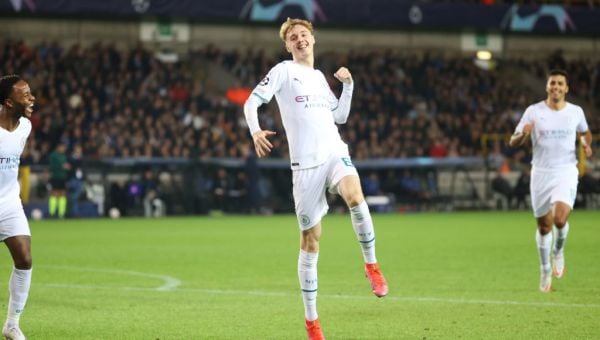 The highly-rated 19-year-old came off the bench and scored a classy goal as City eased to a 5-1 win over Club Brugge in their Group A clash at the Jan Breydel Stadium.

It capped an impressive few days for the youngster, who briefly appeared against Burnley in the Premier League on Saturday before scoring a hat-trick for the under-21s side later that same day.

Fans will undoubtedly now want to see more of the Wythenshawe-born youngster but, as with Phil Foden before him, Guardiola will ease him into the action gradually.

“Cole has a special quality,” said City boss Guardiola. “Inside the box he has this talent which is difficult to find. When he has the ball there, most of the time it finishes in the net.

“But I know how it works with young players. We are calm and patient, like we have done with Phil as well.

“His position is in the second team. He has to play there and win games there but, at the same time, he’s training with us and taking our rhythm and our principles.

“Of course he is a player for our future. I am happy with the goal. He could have done a few things better, but that’s normal. It’s experience. It’s step by step, we give our young players the opportunity.

“The people in this world want things immediately, quick, but everything needs time. You cannot cook a good dish if you don’t spend time in the kitchen. So, take time.”

City were completely dominant as they got their campaign back on track after defeat by Paris St Germain, which saw them fall behind Brugge in the group, three weeks ago.

Joao Cancelo broke the deadlock and Riyad Mahrez added a penalty before the break. Kyle Walker claimed the third before Palmer struck and Mahrez wrapped up the scoring after a Hans Vanaken consolation.

Guardiola said: “It was a really good performance — one of our best performances in Europe, definitely.

“I know how good they did against PSG and in Germany (against Leipzig) but we controlled the game and our pressing was good.

“We used the ball with a lot of sense and had many chances. We are all delighted.”

He said: “In the first half we didn’t create enough and just lost the ball. That was not good enough.

“There were some moments when the space was there, but we didn’t show our quality.

“We know the difference in quality of the two sides, and you need a lot of luck and extraordinary performance of player to get the result. They are one of the two best sides in the world.

“This is not a nice experience as a player or coach, never, but if you take the good lessons and analyse them in a good way we can become stronger for the Champions League and our home league.”