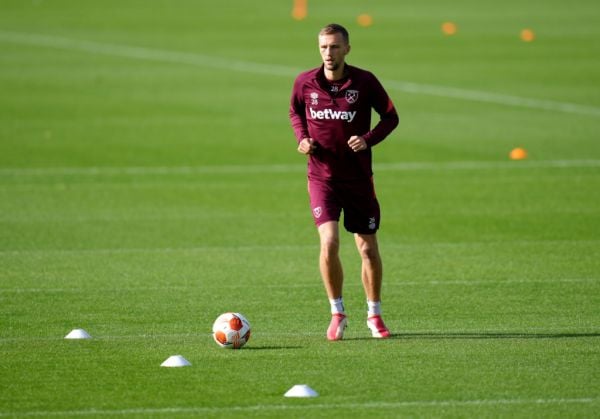 Soucek was caught accidentally by the full force of Toffees striker Salomon Rondon’s studs as they challenged for the ball.

The Czech Republic international was left with nasty cuts near his eye and on his nose and lip following the incident during West Ham’s 1-0 win at Goodison Park.

But Soucek has been patched up and is already back in training ahead of his side’s Europa League clash against Genk on Thursday night.

Manager David Moyes said: “Tomas is OK. He’s been a bit sore. He’s had stitches in his lip, cheek and nose. He’s fine.

“I don’t think his injuries would be any reason not to play him. It’s just a decision on whether we decide to rest him or not. Tomas wants to play.

“He’s had his lip stitched and he got it done by a plastic surgeon again because he had it done after the game. He’s also had stitches on his cheek and his nose.

“He’s fine. I said to him ‘look at my eyebrows. My eyebrows have been stitched from my years as a centre-half’, so he’s got a few more stitches before he gets to this level.”

Cuts and bruises aside, West Ham host the Belgian side in fine fettle with two wins from two matches leaving them top of Group H and favourites to reach the knock-out stage.

“Everyone’s enjoying the league games and Europe and I have to say I’m really enjoying the European experience.

“I want the players to go far in it. It would be great if we could top the group, but trying to make sure that we go through would be the main aim at the moment.”

Croatia forward Nikola Vlasic is in line to play as he goes in search of his first goal since joining from CSKA Moscow in the summer.

The 24-year-old has started just once in the Premier League so far, but he said: “I see it as an opportunity. When I came here I knew the players they had and I knew there would be tough competition.

“I trust the manager, of course. He brought me here, he knows what is best for me. He is aware of a period of adaptation, especially to a team that is together like this team. He knows the best about how much I will play.”