View From The Green Room: ‘Spliced’ – Man, ball an’ all 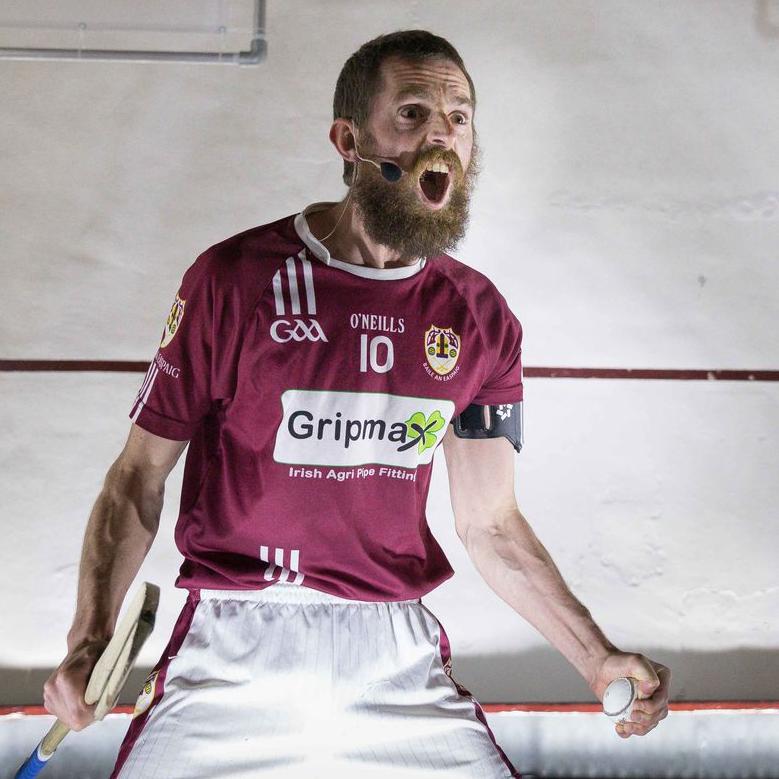 Timmy Creed in full voice in ‘Spliced’ at the Ballygunner GAA Hall.

When he lands into Bishopstown GAA Club, all his demons come together as one to drive this young man on.

Driving sliotars up and down the Ballygunner GAA Sports Hall and throwing himself against the granite wall of the hall, the manic eyes tell all. This story is about far more than simply hurling.  It’s Timmy’s Act 1 – a sort of prescript that backgrounds his tale of his own personal ‘laoch na himirthe’ as he details his growing stature within the club.

This is high-octane, heart-pumpin’, eye-poppin’ stuff as he pounds out the coach’s mantras of winning. And winning is all.

“We hate everyone.” Other teams are scumbags, losers, lousers, plonkers but Bishopstown is the biz. It’s “Bishopstown, Bishopstown, Bishopstown” all the way and losing is not an option. “This is war”, screams the dressing-room before battle is joined and injuries load up like badges of honour. Timmy’s had them all. Broken index finger, thumb, fractured shoulder.

“And I played on,” he roars like Cú Chulainn defending the men of Ulster against Maedhbh’s warriors.

It’s not that he doesn’t admire the other clubs because Timmy is a GAA true-blood, man and boy, boi! There are 2300 GAA clubs in Ireland and some 230 in County Cork. And he names all the Cork clubs in an A to Z litany to prove it.  It’s a litany that’s as religious as it is memorable, in a fascinating train-tempo, chugging rhythm that brings gasps of astonishment from the audience.

There are half-a-million members of GAA clubs. “Did ye know that?” he asks. Timmy uses constant questioning throughout the one-man-show to engage the audience and to hold the attention. He also wanders down around the audience as a way of connecting with them and to make the show inclusive and engaging.

Timmy’s early hero-worship of coaches and managers wanes as he realises that the misogynistic, bullying adult he’s become is no longer for him. It’s a cue for him to take stock and the Damascus conversion to paired-back, yoga-practitioner is difficult. Timmy’s performance of the tortured obsessive realising that this warrior-hurler-life of his is no longer for him is theatre at his best. Bouncing off granite walls to a soundtrack that is a wail of noise, Timmy’s performance is visceral and torturous.

He becomes an actor and goes in search of the paired-back version of the real Timmy Creed – an identity that is not shaped by his performances on the hurling pitch. It’s a journey of redemption.

Lear-like, he strips down to a jock-strap in search of the real identity of Lear’s ‘naked, unaccommodated man’ – the disillusioned hurler’s real identity sans club, sans hurling, sans everything. ‘Spliced’ – the metal band that holds the boss of the hurley together—no longer frames Timmy’s life-experience.

There’s a sense of anti-climax about the ending; perhaps, because the ending is in a continuous process of self-evaluation. He returns to his club and lines up with his friends as the hippy-hurler.

He’s questioning now: “would we be better off without the GAA, without macho-trainers, without GAA player-contracts, without the ingrained bitterness?” I can’t imagine it’s a philosophy that will set well with his management team at Bishopstown GAA.

It’s an extraordinary, visceral, high-octane performance that is packed with passion and no small sense of self-parody as Timmy’s personal story unfolds in the vast expanse of the Waterford Senior Hurling champions’ impressive sports hall.