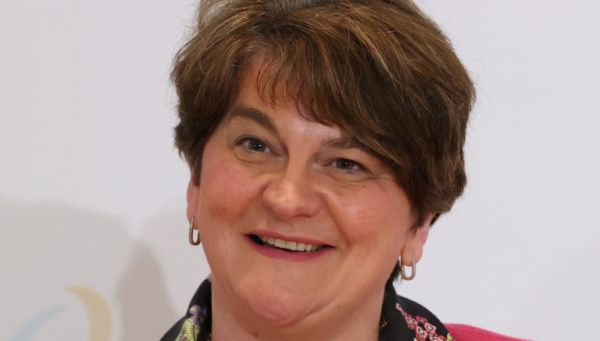 The North’s former first minister Arlene Foster has criticised Government ministers Leo Varadkar and Simon Coveney for their handling of the Brexit process, blaming their “aggressive nationalism” on the growth of Sinn Féin in the Republic.

Mrs Foster said Britain’s relationship with the Government in Dublin has never “been at such a low ebb”, particularly with Minister for Foreign Affairs Mr Coveney and Tánaiste Mr Varadkar.

“They refuse to deal with the practical reality of the principle of consent, ie. that Northern Ireland is a full member of the UK,” Mrs Foster told The Sunday Times.

“They have used their position to undermine the constitutional position here [in the North].

“I can only put their aggressive nationalism down to the growth of Sinn Féin in the Republic.”

The mechanism is part of the Brexit divorce deal negotiated by the UK government and signed by Mr Johnson aimed at avoiding a hard border on the island of Ireland. The terms effectively kept the North in the EU single market.

The UK and EU have brought forward proposals in a bid to resolve an ongoing dispute over the protocol.

Mrs Foster believes the protocol played a big role in her ousting as DUP leader earlier this year.

“We stood against this type of arrangement and were successful at resisting this type of outcome so long as we held the balance of power at Westminster,” Mrs Foster said.

“But, unfortunately, the moment the prime minister had a majority he made a decision to get Brexit done and deal with the fallout later.

“Of course it is hugely disappointing that Boris, under pressure, gave into the protocol as proposed by Leo Varadkar, and all that it has brought.

“When it came into being in January [2020], I and colleagues tried to deal with the problems as they arose but it soon became clear this wasn’t possible and fundamental change was needed.

“There is no doubt the implementation of the protocol was hugely damaging to my time as leader.

“I couldn’t have done any more to alert the prime minister to the problems that would arise, but when you are the DUP leader you are blamed regardless.”

Since leaving politics earlier this year, Mrs Foster has been carving out a career in the media, including as a contributor on GB News, and speaking out against abuse on social media.

She told the newspaper that physical threats and verbal abuse is part of the price as part of being in politics.

“You are videoed doing your shopping in Tesco, people must be very bored, and I was almost forced to do online shopping all the time as every trip became a Snapchat video for someone,” the former DUP leader added.