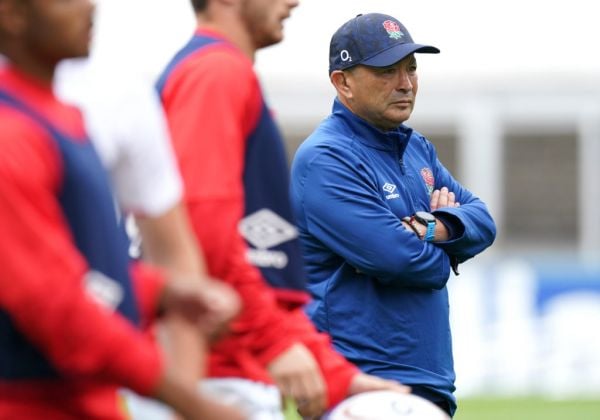 Eddie Jones has defended his coaching methods and high turnover rate of backroom staff in response to criticism of his England regime.

A newspaper report published last week used anonymous accounts from players and former employees to paint a picture of a tense and demanding environment lacking in enjoyment.

Jones has just finished rebuilding his coaching team for the third time with John Mitchell, his number two, the most recent departure after the former All Blacks boss departed for Wasps rather than continue overseeing the defence.

Mitchell’s exit is the latest example of the staff churn that has been persistent since Jones took over at the end of 2015 with assistant coaches, physios, doctors, analysts and pyschologists leaving at an alarming rate.

And while England crashed to their worst ever Six Nations performance earlier this year by finishing fifth, their head coach remains defiant over his management style.

“These things happen. Everyone has an opinion on how you operate. I can’t say it’s right or wrong, I try to be a reasonable person,” Jones told BT Sport.

“I’ve coached for a fair period of time and there have probably been times when I haven’t been as nice as I’d like to be. But I endeavour to be fair all the time and I’m excited where this team is going to go.

“The only thing you can do is respond and the only way we’ll respond is by playing good rugby so that’s what we intend to do.”

Eddie Jones’ team heading off to Jersey this morning for a training camp. pic.twitter.com/HhFkLKKtMC

“Brutal” was one of the words used to describe the way Jones treats his staff, but the 61-year-old said: “I think the fact that I’ve been coaching for this period of time would indicate that that’s not the truth.

“Has it been a high turnover of staff? There’s been turnover in certain areas where we’ve looked to refresh the staff.

“This is my sixth year in the job and you’d expect that from your support staff. I think we’ve got a very good staff here and we appreciate their hard work.”

Jones bristled when asked if he considered himself to be ‘old-school’.

“No I wouldn’t. At all. And I don’t even know what that means. Some of the best old-school coaching is the best coaching,” Jones said.

England have picked an inexperienced squad missing several of its old guard such as Billy and Mako Vunipola and George Ford as Jones looks to mould a new team during the Autumn Nations Series.

Marcus Smith is seen as the player to plot a new direction and for the first time Jones confirmed that the 22-year-old will start at fly-half, with captain Owen Farrell installed at inside centre.

The victim of Smith’s unstoppable rise is Ford, who has been magnificent for Leicester but has no part to play against Tonga, Australia and South Africa over the coming weeks.

“We know George is a good player and we’ve asked him to look at a couple of things in his game to make him better,” Jones said.

“He’s doing that and is playing behind a dominant forward pack at Leicester. He’s playing well. But we’re keen to give Marcus and Owen the opportunity to play at 10 and 12 to see where they can go and take our game.

“I think we’ve got to become much more aggressive in the early part of when we get the ball and we’re keen to know what Marcus and Owen can do together.”

Despite the influence of Smith and Farrell, however, it is another player who is first on Jones’ team sheet.

“Someone who has done remarkably well for England is Tom Curry. Look at the way his game has been developed,” Jones said.

“He came into the side during the last Lions tour in 2017 and since then he’s played at six, seven and eight for us. I can really see his game developing to another level.

“He came in as a very strong defensive player but I think he can really progress his attacking game now, similar to what (former New Zealand captain) Richie McCaw did. There’s no limit to where his game can go.”

Wing Louis Lynagh has been called back into England’s squad for the autumn, but scrum-half Harry Randall has a hip injury so Alex Mitchell takes his place.