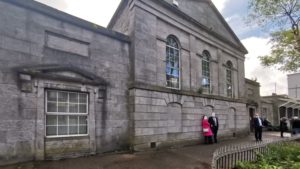 WHAT exactly happened outside Dungarvan District Court on the morning of Wednesday, October 13 is impossible to fully adjudicate upon from this editorial juncture.

However, the following is known: two journalists were denied entry to the chamber while a hearing concerning an individual changed with committing a public behaviour offence against the relative of a local Garda took place.

According to The Irish Times, the reporters – one based in Dungarvan, the other a freelance writer – were “barred from entering the court for over three hours by two Gardaí, with one Garda telling reporters (that) they had been ‘directed by the court not to allow anyone into it’”.

The suggested legal direction has since been strenuously denied by sitting Judge Brian O’Shea, his staff and the Courts Service.

An Garda Síochána has a contrary position, with a spokesperson stating that the force was satisfied that Judge O’Shea “had made an order that a voir dire in this case was to be heard on October 13 2021 at 10am and that only persons involved in the court case should be in attendance”.

A voir dire relates to deciding on the law and, in the case of a jury trial, what evidence can and cannot go before jurors.

In reply, the Courts Service stated that “it has listened to the digital audio recording of the proceedings and the judge did not give any direction to exclude the public”.

Clearly, as suggested by Fianna Fáil Justice Spokesperson Jim O’Callaghan, the appropriate next step is to release the digital audio recording of that morning’s proceedings to the reporters who couldn’t enter the court during that hearing.

It is not uncommon for reporters to sit in court while not being in a position to report on certain proceedings. For example, during legal argument in a jury trial, the media cannot report on matters raised in the absence of the jury for fear of prejudicing a case prior to a verdict being reached.

A judge may impose certain reporting restrictions upon the media during certain cases for a variety of reasons including the involvement of a minor. These matters are clearly established in law and understood by both the attending reporters and their editors.

But to be specifically barred or excluded from any case is an extremely odd and represents a rarely encountered scenario, be it at Dungarvan District Court or any other court in the State for that matter.

The National Union of Journalists (NUJ) has rightly referred to “the imposition of restrictions on access to a public court” when it comes to this particular story.

Certain parties for an array of circumstances might well prefer if journalists were not present in court but it remains a right of the media to sit in the chamber and record its goings-on. Such a right has been overwhelmingly entertained on this island since the practice of court reporting was first adopted by the fourth estate.

Justice unseen, unheard and unrecorded on matters where no prohibition applies is most certainly justice denied. With that in mind, there is no reason whatsoever why the audio recording from Dungarvan on the morning of October 13, which is at the disposal of the Courts Service, is not entered onto the public record.

Otherwise, an unhelpful speculative vacuum will remain worryingly in place. Reporters in a democracy must be allowed to freely report.