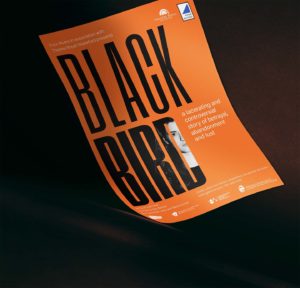 NOVEMBER sees the premiere of ‘Blackbird’, a truly unmissable piece of theatre, which tells the story of Una and Ray, whose relationship 15 years ago had a profound and devastating effect on both of their lives. They hadn’t set eyes on each other since.

Now, in a tense confrontation, the past returns to torment them as they unravel their deeply conflicted feelings for each other.

Produced by Four Rivers, fresh off the back of the hugely successful “The Beauty Queen of Leenane”, Blackbird flies into Garter Lane Arts Centre this November 5 and 6 at 8pm. Here are five reasons why you can’t afford to miss it:

1: It has a stellar cast

Blackbird features Ronan Leahy, whom audiences will recognise from ‘Batman Begins’ and ‘Pursuit’ and British actress Maria Guiver, who acted in Vikings and Thinking Out Loud. Star power that brings a stunning story to life.

In 2017, ‘Blackbird’ won the Laurence Olivier Award for Best New Play, in 2016 it was nominated for a Tony Award with its two lead actors also receiving nominations. It’s been staged all over the world, never with an empty seat.

This is your chance to see a modern classic, which was made into a film in 2018 called ‘Una’ (starring Rooney Mara and Ben Mendelsohn.). You can’t beat live theatre!

4: It will shock you

If you like to be moved by your theatre experiences, then ‘Blackbird’ is an absolute must. Revelations and recriminations fly as this lacerating and controversial story of betrayal, abandonment and lust unfolds. It’s a thought-provoking and challenging night at the theatre and leaves audiences questioning their preconceptions and with the realisation that little in life is ever black-and-white.

Directed by former Artistic Director of Theatre Royal, Blackbird is a collaboration between the Theatre Royal and Central Arts, driven by a determination to bring professional theatre production back to Waterford City.

Audiences can catch ‘Blackbird’ at Garter Lane on Friday, November 5 and Saturday November 6 at 8pm. Tickets (€22) are available from the Garter Lane Box Office (051) 855038 or from www.garterlane.ie