ON THE SPOT: Eoin O’Neill 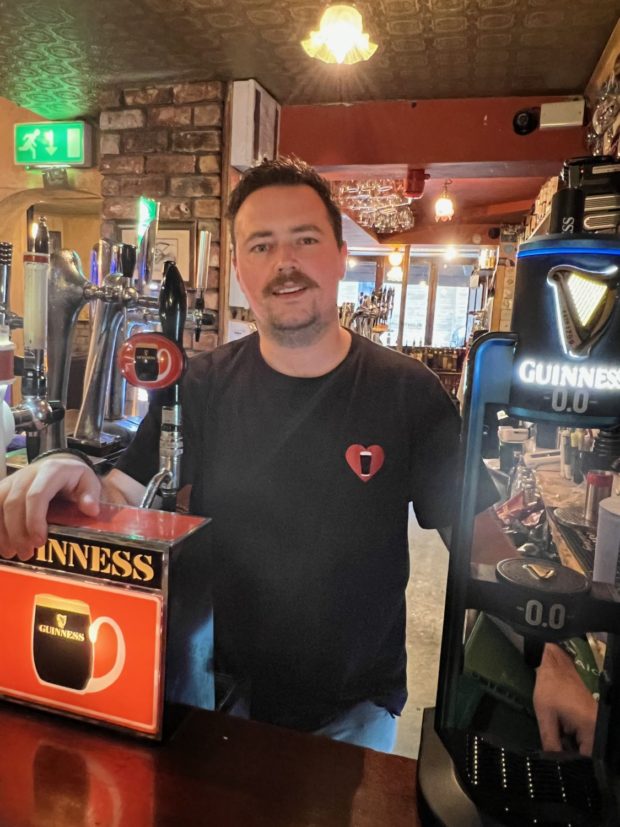 Eoin O’Neill (31) is the bar manager of well-known O’Connell Street pub, Tully’s. Engaged to Grace Power and proud dad to two–year–old Logan, Eoin has been working in hospitality since he was 16, in local bars such as Revolution, Kazbar, The Reg and also in Dublin in The Liquor Rooms and a summer in Italy in the famous Scholars Lounge Rome. Eoin has also worked also for Dalcassian Wines & Spirits and launched Drumshanbo Gunpowder Irish Gin in Ireland in 2016 and the US in 2018.

A Life in a Day

Depending on the day, really. At the start of the week, I would drop Logan into creche and head into the bar to get stuff organised for the week ahead. Towards the end of the week, I would have more time in the mornings with Grace working, Logan would treat me to a coffee somewhere or a walk around town or the park. We would then get Logan’s lunch and down for an afternoon nap (hopefully). I’d get ready for work and head in for a busy night. If I have time, I like to cook a nice pasta dish or a curry, something I can eat at work and that will last a day or two in the fridge too. I enjoy playing football when my ankle allows and over the last year, I started going to Muay Thai as in doing the fitness classes. I 100 per cent recommend it to everyone and anyone – such a friendly and welcoming environment and John Walsh is a motivational machine.

I went to Butlerstown Primary School because that’s where I’m from. I went to St Paul’s Secondary School because my Dad was teaching there at the time. I’m lucky he was a teacher the students liked! I then studied hospitality management in WIT.

A good few and I’d see the odd few around still. My Maths teacher Mr Bailey, whom I remember starting in the school maybe when I was 15/16 and just recently heard he has become deputy vice principal which is, excuse the pun, class.

Eh, I’m not really sure, 15-year-old me had a lot going on at home and school. I think I got through it okay, maybe be nicer to my sisters (I am now by the way) or maybe spend more time or talk more to my grandparents.

It doesn’t happen often but when I have time, I grab a coffee and bring Bodhi (the dog) for a walk in Woodstown or out to my Dad’s and walk with him and his dogs up the back fields.

Relaxing for me also might involve the Xbox or a tv show or film with a nice whiskey or a good cup of tea. I do love putting on my headphones and listening to music or a good podcast, the Darren Conway podcast called “Stall It” is quite funny and an easy listen.

One film is impossible for me to pick as I’m a big fan of films from the 80s such as ‘Star Wars’, ‘Cocktail’, ‘Roadhouse’, ‘Indiana Jones’, etc. The last film I saw in the cinema was ‘No Time to Die’ and I thought it was amazing. My music taste is a bit of a mash up. One minute I could be listening to Wu Tang Clan and the next Garth Brooks or Luke Kelly then The Weekend. Music in Tully’s is a big part of the experience, it sets the foundation for the atmosphere. We even ask customers if they want us to play a specific song or guilty pleasure song which is always fun. Saying that, don’t be surprised if you hear a Spice Girls song every now and then – I’m sure that’s someone’s guilty pleasure!

A friend of mine, Andy O’Gorman passed away a few weeks back. I hadn’t seen him since before lockdown as he lived in Dublin. I got the news on a busy Saturday night at work, it knocked me and I just had to sit down upstairs for 15 minutes to process and reflect and remember him, everyone in work was supportive and I really appreciated it.

Is it a cliche to say when Logan was born? It was an unbelievable feeling to set eyes on him for the first time. That has to be it. Ronaldo re-signing for United is up there too.

Not really. I wouldn’t be the most religious guy but I don’t disregard other people’s beliefs. Each religion has its own interesting ideas and traditions. Respecting other people’s choices is the best thing to do.

When I was working in sales and driving a crazy amount, I had a big fear of being in a car crash and I came across quite a few over the years although thankfully, none involving myself. Now, I probably worry more maybe failing at something I am doing in work or personally.

I’m actually not sure, I have some nice unopened bottles of whiskey and I still have my first car that those who know me will remember, a 1987 Toyota Starlet.

I’ve always liked history and there is plenty of that here in the city. I lived in Dublin for a year and it actually made me appreciate the city a lot more when I moved back. I love how close to the coast we are. Great places to eat and drink.

That the Waterford glass factory never closed down. That was a dark time for this city and so many families and it had a knock-on effect that we are still trying to recover from today.