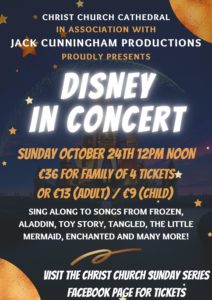 IT’S 11:30 am and I’m at the end of a queue that stretches down to where Wright’s Bicycle shop once opened for a Jack Cunningham Theatre School production of Disney classics.

It’s part of the Sunday morning concert schedule from Christ Church Cathedral that is proving to be a huge success. Coming as it does at midday, it’s the perfect time for families to get out and about and enjoy real family-time together.

Well, of course, the programme and the morning are aimed fairly and squarely at the young audience who are greeted with sweets and smiles in the nave of the church on entry. And they’re also invited to sing along with the lyrics supplied in the programme – a nice touch – and dance along if they feel like it.

It takes the young performers-in-the-making a few nano seconds to work up the courage and then it’s off to the aisles as if they were born to it.

Jack Cunningham has a kiddie-proof programme of big Disney hits that everyone in the audience knows well and a quartet of young singers that – despite their tender years – are well-known young stars on the musical theatre circuit. Jack McGrath, Emma Walsh, Carrie Mullane and Peter Rafter are already seasoned performers with big voices and personalities to go with it and, along with the Jack Cunningham young chorus, give a thumpin’ good belt to all the big numbers in the show.

‘Be Our Guest’ is just the ticket to set the concert on its way. “Would anyone like to hear a song from Frozen?” asks the delightful Princess Emma; a deaf man in a coma in Ballybricken would have heard the ‘YESSSSS’ that the young attendance screamed back.

As you can guess, numbers from ‘Frozen’ are always the real deal with the young audience. All the modern Disney classics get a turn – ‘The Princess and the Frog, The Little Mermaid, Enchanted, Beauty and the Beast, Tangled, Moana’.

I’m delighted to see that the ever-popular Disney classics are, well, still ever-popular. ‘Toy Story’s ‘You’ve Got A Friend In Me’, Jungle Book’s ‘The Bare Necessities’, the Mary Poppins number ‘Knees Up Mother Brown’ with a Jack McGrath tongue-twister that’s really special and the Lion King’s ‘Can You Feel The Love’ that just about sums up a special morning in Christ Church. Well done to the Jack Cunningham Stage School.