DARREN SKELTON: Our hearts are being broken 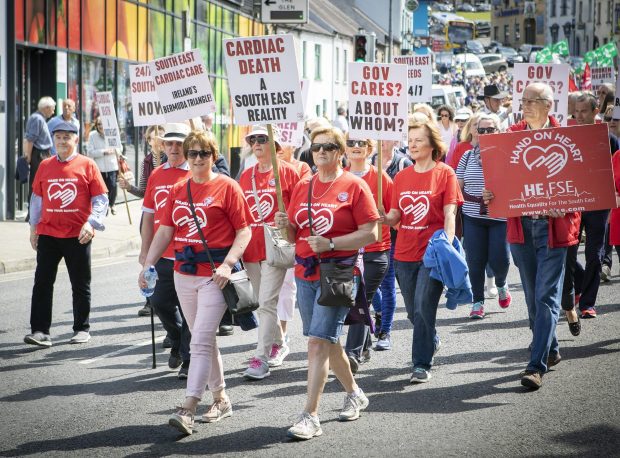 Hand on Heart pictured at the rally for 24/7 cardiac care. Photo: Joe Evans

DO you remember all the marches and protests for 24/7 cardiac care? I certainly do because I didn’t miss one of them, including the two that took place in Dublin.

I remember marching along the quays and people in traffic looking at us like we were lunatics. I couldn’t help but think, as I looked at these people looking down their noses at us from their steering wheels, that we were there for them as much as we were there for ourselves and our children. After all, they each have beating hearts in their chest like we do.

You’re probably wondering why there hasn’t been a protest in a while. Well, Waterford elected a cardiac care TD and the green light was given to a second cath lab so I think we could all be forgiven for thinking that this was it, it’s just a matter of time now and 24/7 cardiac care will be here for us all.

I’m sorry to be the bearer of bad news, but it’s as far away as it’s always been. There are some things happening right now that everyone needs to be aware of, things that are not getting the attention that they deserve because we’re in the middle of the world’s first recorded never-ending pandemic.

First thing’s first, the powers that be don’t seem to be able to make their minds up about whether or not the cath lab that’s currently being built will have interventional capabilities, that is, if it will be able to facilitate the type of emergency procedures that we’ve been demanding for the last decade or so.

The purpose of a cardiac catheterization lab is to facilitate the examination of the heart structure and function. In a diagnostic only lab cardiologists can diagnose a problem with the heart such as weakened muscles or a structural defect.

It can also check the pressures in the heart chambers, see how well the chambers of the heart are pumping blood, look for heart valve defects and take samples of blood or tissue. Once a diagnosis is made, it’s off to a lab for an interventional cardiac catheterization which allows for the treatment or repair of a heart condition through the use of specialised equipment and cardiologists.

Now, twice in the last six months, the Minister for Health has been asked whether the second cath lab would have interventional capabilities.

Twice, in writing, I’ve been told the following: “the preferred option is for a second cath lab and associated 12 bed day ward (delivering six additional beds) on the roof of the existing Cardiology Department, which will operate five days per week and provide diagnostic services only”.

Fine Gael Senator John Cummins has said he has received correspondence from CEO of the South South West Hospital Group Gerry O’Dwyer that the lab WILL have interventional capabilities.

My concern here is that in recent correspondence that I’ve received from the Hospital Group, Mr O’Dwyer is no longer the CEO so the veracity of that promise will have to be questioned.

Secondly, and quite significantly, according to an answer given to Deputy Matt Shanahan (Ind), there has been no recruitment of cardiac nurses, no allocation of budgets to support bed monitoring or cath lab consumables and no budget ring-fenced to deliver expanded hours from the additional €4 billion that was delivered to the health service in 2020-2021.

Remember when we marched the streets for 24/7 cardiac care, and here we are, absolutely no closer to even getting a couple of hours extra service a day.

When the Taoiseach, Micheál Martin was asked about that picture of him standing outside UHW promising the people of Waterford that he would deliver 24/7 cardiac care in Government he said that he was always taught to be “objective in terms of one’s historical narrative”, at which point his colleague, Mary Butler TD shouted “hear, hear”. He then proceeded to completely ignore the question, except to add that the second cath lab was on the way.

I believe that all the evidence is there. When it comes to the most emotive issue that, possibly, there has ever been in Waterford, we are being completely and utterly shafted.

Yes, they’re building another cath lab, which will help to reduce the 2,192 people that are waiting on an cardiology appointments, but it will be nothing close to what we’ve been screaming for.

As it stands now, we are no closer to living in a region where we can have a heart attack on a Saturday afternoon and receive emergency intervention from our closest hospital. We’ve been led up the garden path for so long that our hearts can no longer take it.