“I AM concerned that the announcement about Waterford, which took into account not only the status and achievements of that college, but also the specific higher education needs of the south-east region, has been interpreted as in some way diminishing the status of Cork regional technical college. That is not the case.”

So said Education Minister Niamh Breathnach (Lab) in the Dáil in January 23, 1997 in response to then Cork TD Joe Walsh (FF), four days after announcing her intention to create Waterford Institute of Technology (WIT).

Despite Cork being a university city since 1845, the umbrage taken at the retitling of Waterford Regional Technical College (WRTC) to WIT led to a hissy fit on Leeside. As Richard Thorp notes in ‘No Artificial Limits’, a superb history of Ireland’s RTCs, the then CIT Students’ Union President told The Irish Times: “the Minister’s decision to upgrade Waterford RTC…has left us, effectively, in the second division, and we are not going to allow that situation to continue.”

Nor did Cork’s Oireachtas members, including current Taoiseach Micheál Martin.

During March and April 1997, the High Level Group to Advise on the Technological Sector, chaired by UCD Professor Dervilla Donnelly met six times to propose criteria which would determine the redesignation of RTCs to Institutes of Technology. Its findings, writes Thorp, undid the body’s initial position: that larger RTCs should become ITs.

“The implication of such a finding is clear: Waterford had no greater entitlement to an enhanced status than any other college. Under such circumstances the group had no choice but to recommend ‘That each college be redesignated with the common feature Institute of Technology in its title’.” 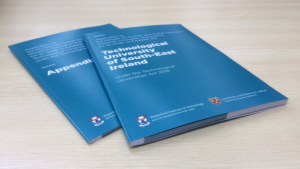 Almost a quarter of a century later, it’s hard to avoid the irony in WIT’s featuring in the final consortium, along with IT Carlow, to be granted TU status; therefore, it’s quite explicable not to get overly excited about this in Waterford just yet.

On Tuesday last, Higher Education Minister Harris, describing the announcement as “a fantastic day in the South East”, didn’t specify what the TUSE’s budget will be. This is a substantive and critical issue.

But here’s what we do know given the Minister’s subsequent comments in the Oireachtas: advertising for the appointment of the TUSE’s President is likely to be advertised in the coming weeks.

Minister Harris is also due to meet WIT and the Higher Education Authority (HEA) to discuss a business case taking the “acquisition of an additional site” in Waterford into account, with the Waterford Crystal site in Kilbarry clearly the outstanding candidate for development.

The Minister also stated: “Waterford seems like a sensible location for the  (TUSE) headquarters for a variety of reasons, including national planning policies.” He has also suggested progress in terms of borrowing capacity, with access to the European Investment Bank seeming like a logical and just advancement for the new TU.

University level funding is what the TUSE unquestionably requires. Anything short of that will leave this city, county and region short-changed yet again. Caution in Waterford – for now – is clearly understandable.