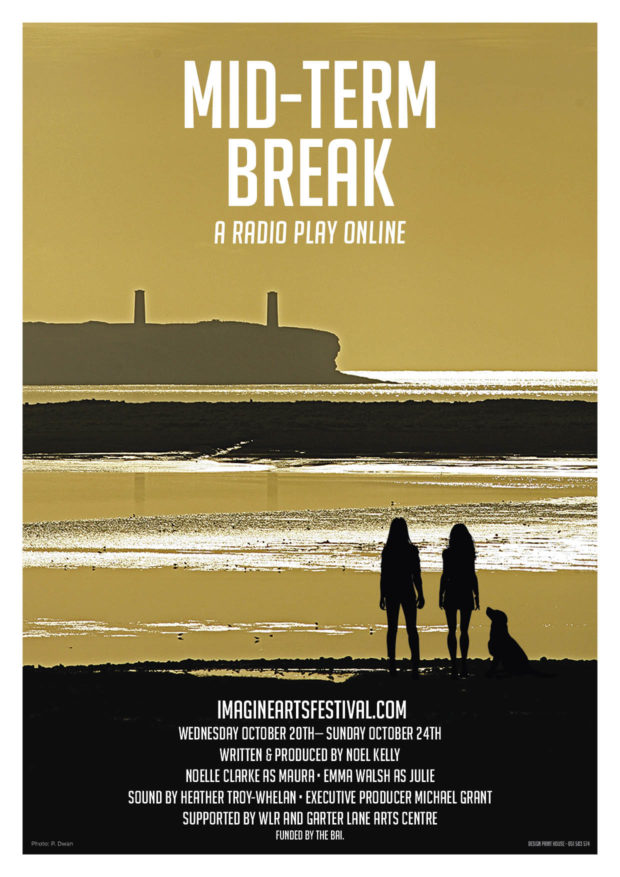 THERE’S an arc to all love stories. Couples meet, fall in love, circumstances and misunderstandings intervene, lovers move apart, meet and reconcile – and live happily ever after.

Local playwright Noel Kelly’s interest lies in the collateral damage that occurs when fate intervenes and unfaithfulness drives a wedge between the lovers that brings no small amount of despair and hurt. The happiness that results from reconciliation is the product of one party’s ability to absorb the hurt and betrayal and move on because, in all relationships, one partner always loves more than the other.

‘Mid-Term Break’ is the final episode in a trilogy of one-act plays that follows the life, loves and circumstances of accountant Julie (Emma Walsh) and hair stylist Maura (Noelle Clarke) who find love and happiness together in the shadow of the deaths of their husbands in the two previous episodes of this story.

Both actresses are superb, interpretations are emotional and intuitive, and the geography and space of their voices bring us to unimagined places.

Their families have moved on. The kids are older now and both women have the freedom they have always sought from the controlled relationships of their former marriages. Maura, however, still misses the companionship of a marriage that had stood the test of time and, as she prepares to cast Michael’s ashes off Brownstown Head, this widow is entertaining doubts.

Maura’s husband was a cheat and a bully and she has to face up to this just as Julie did. Julie’s hopes for a new shared life together offers a future as new people confirmed in her own sexuality. What could be easier?

Winter is over now and spring has come. Change is in the air but, apparently, Maura is more insecure and needy than Julie. As their friendship becomes a relationship, Maura’s commitment is ambivalent and uncertain.

She reflects on the security that marriage – however unhappy – brings and the collapse in the relationship with her kids along with her fears of growing old niggles. She is terrified by loneliness and struggles to commit to a long-term lesbian relationship with Julie and she needs the reassurance of a mid-term break between a straight and a gay relationship to sort out matters in her own head.

When the circumstances of Maura’s mini-fling emerges, Julie feels hurt and recriminations are dumped on the floor like Monday’s dirty washing. And it’s about as pretty as a garlic milkshake. Caring, kind Julie reveals an edge that is obsessive, compulsive, bitter and threatening in a tirade of abuse that is nasty and downright vulgar.

She wants all the sexual details of Maura’s intimacies with a man Maura met in Tesco. Julie’s superior intellect and her accountant’s forensic questioning exposes all the holes in defensive Julie’s account of her night with Tesco Man. Hell hath no fury like a gay woman scorned. That’s the problem with an affair; you don’t always know how it’s going to turn out in the end.

Neither character cover themselves in glory as they relate their own indifference to the collateral damage caused to the families of their former lovers by their own infidelity. It’s a clear case of St. Augustine’s dilemma ‘dear Lord, make me good…but just not yet!’

Ultimately, Julie’s massive personality and superior intelligence as the Rottweiler with lip-gloss overcomes defensive, apologetic Maura’s misgivings and they both commit to each other as the music softens to a romantic conclusion…’we’ve only one life; let’s live it’.

Hmmm. I have my doubts!  Maura’s fears that she may well be exchanging one controlling spouse for another are well founded as past frequently becomes prologue.

‘Mid-Term Break’, a play for radio, was written and produced by writer Noel Kelly. Michael Grant was Executive Producer with sound by Heather Troy Whelan. The project was supported by Garter Lane Arts Centre and WLR,  funded by the BAI and was broadcast online as part of this year’s Imagine Arts Festival.