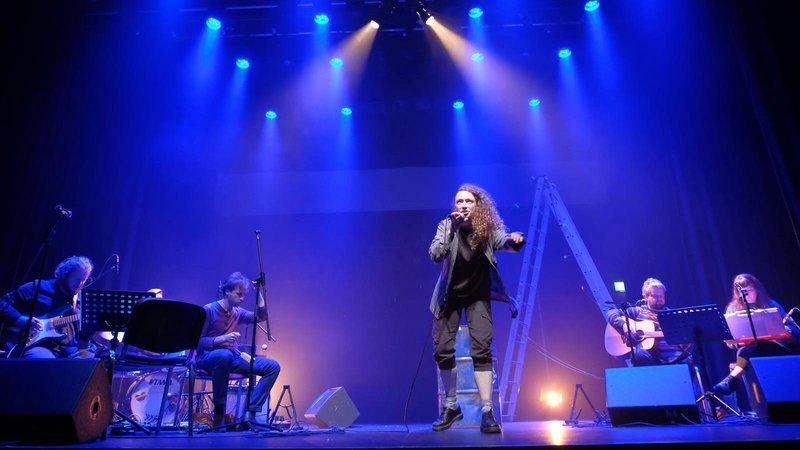 Eleanor McLoughlin as Aoife in the Iron Annie Cabaret.

THE Iron Annie Cabaret rocked up to The Mall with a show that is crass, vulgar, in-your-face, sexually explicit and different. And interesting because the show always holds the attention and challenges our perception of theatre.

Right from the off, I find the superb Eleanor McLoughlin’s Aoife, with her ‘beyond-flaaat’ Louth accent, sitting in the same row as me at the back of the stalls. Eleanor’s bitter-sweet symphony is a story of love and lust with the enigmatic Annie in an overtly masculine world of drink, drugs, sex and rock n’roll.

Aoife is a significant drug-dealer in the Dundalk small-town underworld and her couldn’t-give-a-tosser attitude drives the production on. She’s an adrenalin junkie that gets high on action, speed and sex and loves to grab life by the bat and balls. There’s no hint of Achilles heel weakness either and her indifference to all those around her insulates her from the consequences of her actions. She rubbishes children, sister, family, father and all middle-aged with a tongue that could tar roads.

‘I’m no misanthrope’ says she with her flat Louth vowels, ‘I just don’t like hypocrisy.’ Aoife’s take on hypocrisy, by the way, is the normality of life that most people cling to. Like Nietzsche, she struggles to tolerate reality. However, Aoife doesn’t believe that she’s just anyone. She’s Aoife – a ‘bitchalante’ force of nature that disrupts, disparages and destroys anyone – friend or foe – who gets in her way.

Until she meets Annie. Ah Annie. Who introduces herself first to Aoife as Andrew, ‘the goodlookin’ dude with base vibes’, when they meet at a club. Cue newly formed onstage rock band False Slag with a rock number that mimics Aoife and Annie/Andrew’s Olympian sexual ecstasy as she rocks along with all the band. It’s a reverse version of the Kinks classic ‘Lola’ with more colourful language although somewhat less tuneful.

Annie is a major disrupter in Aoife’s life and her unfaithfulness seriously dents Aoife’s underworld armour. Especially when she starts dealing with Aoife’s gear. The otherwise implacable Aoife’s scaffolding is rattled and, like a rattled co-dependent lover, is willing to settle for less than all.

Annie wants heterosexual flings as well as lesbian trysts and Aoife has to accept it or lose her forever. It’s a first for the lassie who always puts herself at the top of the pecking order. Folk duo, the Dandelion Few, is on hand to offer lyrical commentary on the tender moments of the storyline.

Unfortunately, Dundalk writer’s Luke Cassidy’s narrative gets sidetracked into a number of unresolved storylines. The wake of Aoife’s nan seems to go on forever and has little to do with the script.

Aoife agrees to shift 10 kilos of stolen cocaine for the Rat King  he carries a pet rat in his top pocket); something that’s not going to sit too well, I imagine, with the rest of the Dundalk criminal underworld. However, we never really find out how that part of the scenario panned out.

The sweet and lyrical ending – with an onstage Annie singing beautifully and beaming lovingly at the less-than-adorable Aoife – stretches belief as Annie’s unfaithfulness is cast to one side.

Nevertheless, the intensity of the excellent Eleanor McLoughlin’s performance, the visceral nature of the material, the contrast between Dandelion Few’s lyrical folk and False Slag’s rock, the theatricality of it all and the insight into a mind of an underworld-princess made for an interesting and different evening.

While the language is crude and the graphic sexual journey of Annie and Aoife is not for the faint-hearted, I’m not sure that the story could be told in any other way without losing authenticity. A different and interesting night on The Mall.