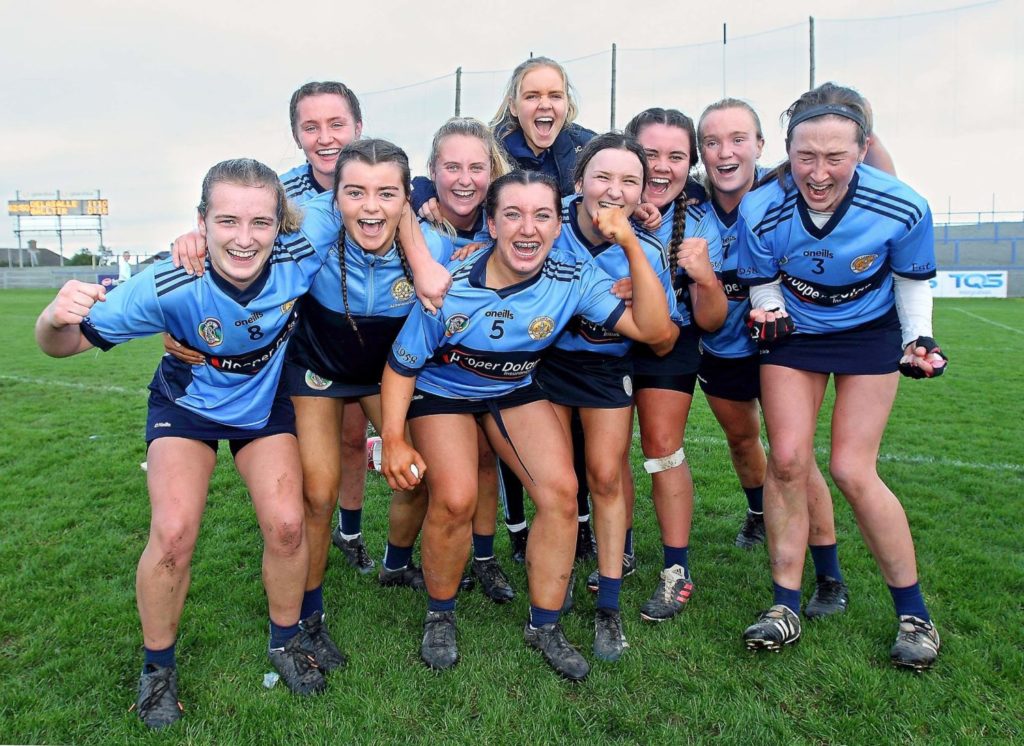 Some of the Gailltír team celebrating at the final whistle after they claimed their fourth Co. Senior camogie title in a row on Saturday in Walsh Park. Photos: Noel Browne.

At this time of the year, inter county managers turn into talent scouts.
Tune into TG4 on a Sunday afternoon and the camera will pick out Brian Cody, Liam Cahill or John Kiely in the crowd. Like Gareth Southgate when he turns up at a Premier League ground.
Waterford camogie manager Derek Lyons had to be happy with what he saw on Saturday. Current panel members performed and new panel members emerged. 2021 Déise minors Alannah O’Sullivan, Laoise Forrest and Maeve Sheridan will be in his thoughts for 2022. All three starred in their first senior final. 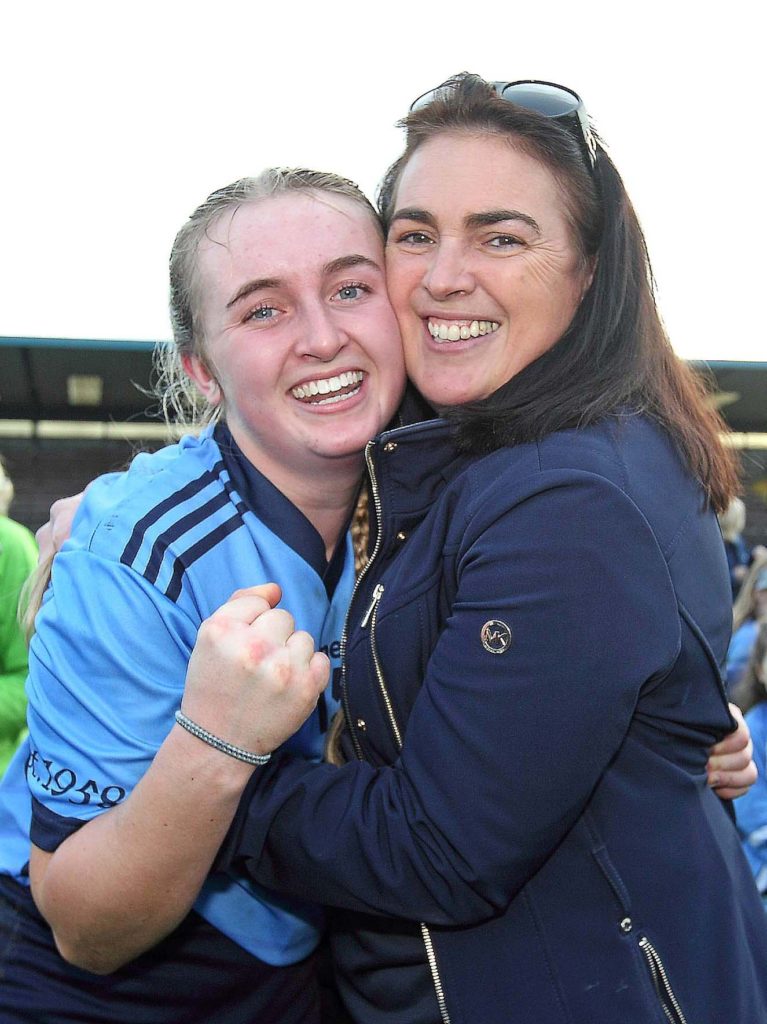 Gailltír’s Alannah O’Sullivan celebrates with her mother Roisin Hartley at the final whistle.

Alannah O’Sullivan was top scorer for the Waterford Under 16s when they won the All Ireland B championship in 2019 and was free taker again this year for the minors. She was also part of the St Angela’s Ursuline squad that won the All Ireland A title two years ago.
The sprightly corner forward was always out in front of her marker on Saturday as she returned four points from four shots at the target (three in the first half). She also won three frees for her team in the second half. Two of those frees resulted in points for Aoife Fitzgerald. A livewire.
Laoise Forrest offers more physical presence than O’Sullivan. She bursts past defenders and knows where the posts are. She was full back on that Waterford Under 16 side and was number three again with the minors but has emerged as a point scoring corner forward at club level this season. Like O’Sullivan, she had a hundred per cent accuracy with three points from three shots. She also got the score of the game from an acute angle against St Annes.
Another Déise minor Maeve Sheridan is earning a reputation as a tight marking defender. In her rookie year, she has tracked Niamh Rockett and Abby Flynn. Sheridan is a sticky opponent. Even when she loses the ball, she still manages to get a hurley in. De La Salle moved Flynn out to the half forward line in the second half to get her on more ball.

Lynchpin
Lyons will hope to see more of Kate Lynch in 2022. She received a straight red card in the loss to Cork in the league which ruled her out of the relegation play-off with Dublin and the first round of the championship against Down.
Lynch usually teams up with Shauna Fitzgerald at midfield for Gailltir but management had a special task in mind for her on Saturday: Beth Carton. She attached herself to her county team mate and didn’t flinch from the physical exchanges. Carton was held to two points from play.
Will the Fitzgeralds feature next year? Aoife is one of the best ball strikers in the county. Operating in the half forward line, she got two from play and struck over a second half free from the 65 metre line. She has been part of the Déise senior squad in recent seasons but has yet to break into the starting fifteen. The return of Annie would also add to Waterford’s attacking options. 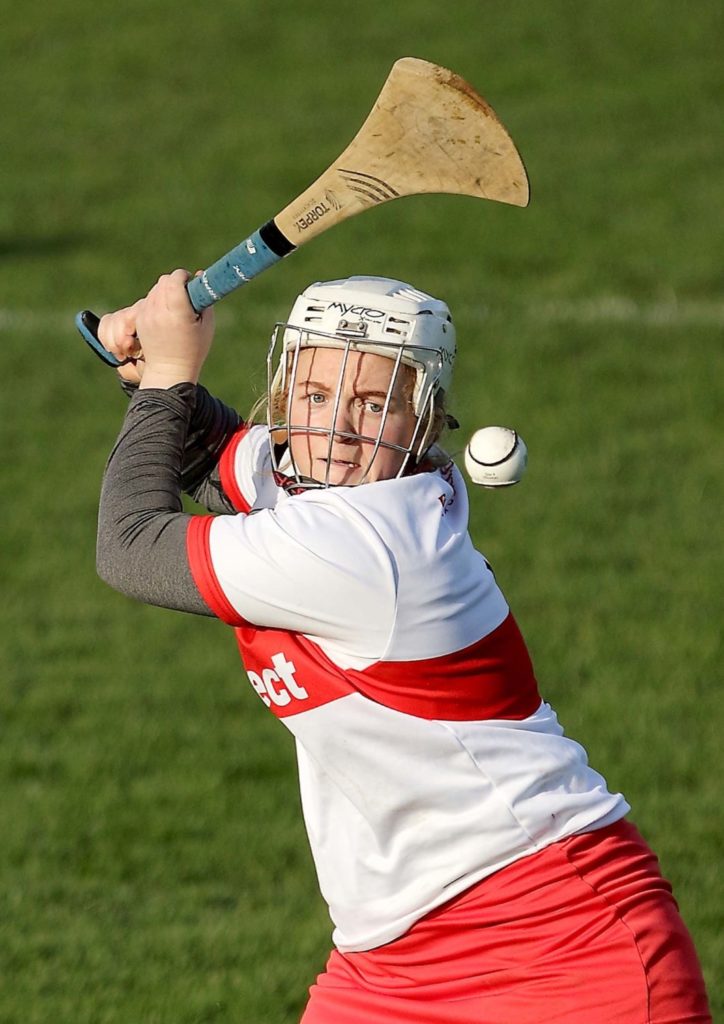 Brianna O’Regan made a string of brilliant saves for De La Salle.
Brianna O’Regan will be the first name on the Waterford team sheet next season.
Her shot stopping, her aerial ability and her distribution makes her one of the top goalkeepers in the country. It was a big surprise that she wasn’t among the list of All Star nominations last month.
Three stunning saves in the third quarter kept her team in this county final. After a scramble for possession, the ball broke out to Ciara O’Sullivan who smashed a shot goalwards but O’Regan managed to block it on the line. A jaw dropping stop.
She showed her bravery to deny Annie Fitzgerald twice. The Gailltir full forward was put through one on one but the De La Salle netminder smothered her shot. When Fitzgerald advanced on goal again, the O’Regan raced off her line, made herself big and narrowed the angle. She put herself in the way of Fitzgerald’s flying hurley and the ball dribbled wide. Body on the line stuff.
The talent spotting for Lyons and company will continue for the rest of the winter.

See this week’s Waterford News & Star for a full report and loads of great pictures from Gailltír’s County Final win over De La Salle. It’s in shops now or to buy on the link below: