Covid hotspots: How many cases in your local area? 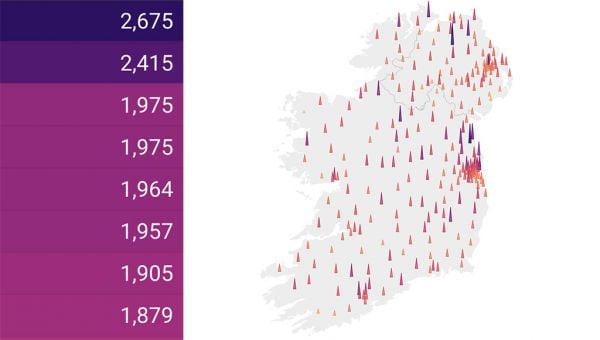 Covid infection rates in Ireland have reached their highest levels in nearly a year, with top officials warning the health system is under “inconceivable strain”.

According to the latest official figures, Drogheda in Co Louth is the most Covid-infected part of the Republic.

The Drogheda Urban local electoral area reported 2,415 cases per 100,000 people over the most recent two-week period. The infection rate in Drogheda has more than trebled from three weeks ago when the area had 691 cases per 100,000.

Neighbouring areas in counties Louth, Meath and Dublin have seen case rates surge over recent weeks, with Drogheda Rural (1,964), Laytown Bettystown (1,879) and Balbriggan (1,717) all among the most infected areas of the country.

The BT46 postcode area in the North, which covers Maghera and parts of Co Derry, has the highest rate on the island. About one in 37 people had coronavirus over the past two weeks in the Maghera postcode – 2,675 cases per 100,000 people.

Most parts of Cork city also have rates over 1,000 – Cork City North West (1,717) and Cork City North East (1,456) have the highest, while neighbouring Cobh (1,448) has seen the infection rate almost double since late October.

The figures are based on the number of new cases in the Republic’s 166 local electoral areas and the North's 80 postcode areas over the most recent two-week period.

It comes as HSE chief executive Paul Reid said the health service is facing the “highest level of impact and risk we’ve had to manage since Covid landed here”.

He told a briefing on Thursday: “The situation in our hospitals and healthcare systems overall is very serious,” as they struggle to deliver both regular care and respond to the pressures of the fourth wave of the virus.

Mr Reid warned that services will face “unyielding and unrelenting strain over the next while”.

In response to warnings from health officials, the Government earlier this week announced fresh measures in a bid to reverse the surging number of cases.

Pubs, nightclubs and restaurants must now close at midnight, and people are being urged to work from home from Friday if they can.

There will also be a more widespread use of antigen testing.