“We’ve got to believe we can get the job done” 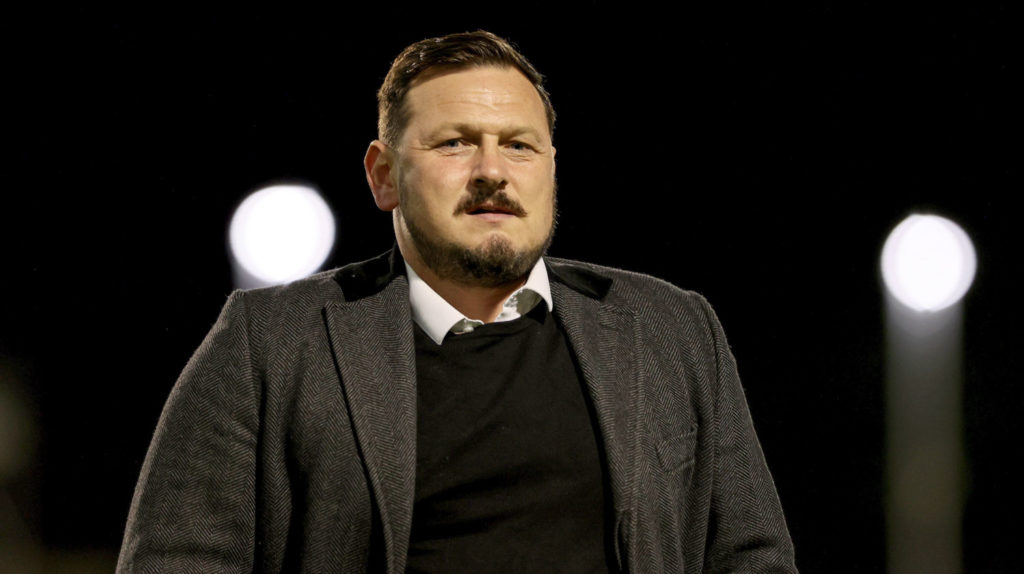 Waterford FC manager has his depleted squad ready to go against St. Pat’s at the RSC tomorrow night. Photos: Inpho.

Waterford FC manager Marc Bircham has asked his players and the fans to believe that they can get the win that will help their chances of avoiding the relegation playoff when they face St. Patrick’s Athletic at the RSC on Friday night.
The Blues go into the game against the FAI Cup finalists knowing that if they manage to better the result of Finn Harps, who play host to bottom side Longford Town, then they will avoid a final game against the winners of Bray or UCD, but he knows it’s going to be tough.

Speaking ahead of the game, the Blues boss said, “We didn’t really want to focus on where we are, but it was always in the back of our minds. We’ve had such a hard season to try get through with such a small squad and with so many lads patched up. We just didn’t have that composure up in Longford to see it out.
“We should have won the game. We had a number of good chances to win, but we couldn’t get it over the line. Now we go into this game with St. Pats with the pressure off, but with even a more depleted squad through suspensions and injuries.
“It’s literally down to the bare-bones for us, and we’ve probably got 12 outfield players available for the game, but all the pressure is off us, and we’ve got nothing to lose. We’ll need to pull off a bit of a miracle to get over the line.
“Even in the last three weeks where results haven’t gone out way, I think that we’ve still performed well. We performed really well against Derry and Shamrock Rovers, but as we’ve said, we let ourselves down with set pieces.
“It’s disappointing that the penalty that Longford won last week, we didn’t give away, it’s a dive and we’ve seen it on the replay. It’s disappointing to that, but I won’t go on about officials. I’m not making excuses for players, I never do, but it was a very difficult pitch, very heavy and difficult conditions.
“We were the better team and we created the chances. We had over 70% possession, and created eight goal scoring opportunities that we didn’t take. It was our fault that we didn’t win the game, but we have to look forward to this game against St. Pat’s.”

A BRILLIANT EFFORT
“We’re playing a team that are second in the league. We have nothing to lose, we’re depleted, but we have to go out and give it a right go. I think what the lads have done this season has been phenomenal. To be even in this position, and to have that many points is unthinkable. It was even unthinkable three months ago.
“They’ve done brilliant. I think that we just need to get a really good performance in. They’ll be players coming in that haven’t had many games so now is their chance to go out there and put a marker in the ground, try get it out the line. Let’s get a win, and hopefully Longford can do us a favour. They owe us one for that penalty!
“I think that the players are more mentally tired. The physical side as you come to the end of the season is just a routine, but for these young players, it’s just mentally draining. To go through the experience that they’ve gone through this season with Covid, lockdown, and been rock bottom of the league to coming back, it was always my fear that it would happen.“

“Many of this young players haven’t played ten games on the trot, nevermind 20, so there was always going to be this mental side. Credit to them. The performances have still been good, a lot better to what they were, and a lot better to what they were performing at so I just got to get them over the line.
“I think we can. The fans are going to be massive for us. They’ll be packed in there and they get the best out of the players. Whilst it will be mentally draining, the crowd can make a difference, and hopefully they’ll do that on Friday.
“It’s a massive learning curve for these players, but that’s why you come to this league to play. There’s no point doing it at U23 football in England or anything like that. You’re thrown into the deep end, and a lot of them because of what happened here before were thrown into the deep end because they didn’t know whether or not they were good enough.
“They’ve got a lot of games under their belt, but I think that they are in a lot better place mentally and professionally because they’ve got games to their names. They’ve got winning games to their name. There’s no point having games to your name if you have lost most of them.”

Waterford’s Shane Griffin celebrates scoring a goal when the sides last met at the RSC in the SSE Airtricity League Premier Division in June.

A CRAZY POSITION
“It’s crazy that we have 41 points to our name and we find ourselves in this position. They still believe, and we still believe that we can go out and win to stay in this league. I just can’t believe that it comes down to the last game of the season and you can still get suspended.
“Jack Stafford picked up his first yellow on the opening day, and he gets his fifth yellow over 30 games later, so he is suspended. Mother Theresa would still get five bookings in this league the way they dish them out so you should probably get a bonus if you only manage it in this league. That’s another thing that we can hopefully talk to the league about next year.
“We’re not looking at the playoffs just yet. We’re playing St. Pat’s at home, so hopefully Longford can do something at Finn Harps. If we have to look past that, we will do. No team has ever gotten as many points as us and have been involved in a playoff.
“We’re on 41 points, which is magnificent from where we was. Not a lot of teams will want to play us. We believe in ourselves, we’ve had a little dip in results, but look we’re still fully confident so hopefully we’ll have a really good night Friday with a packed RSC and the team flying.”

TEAM NEWS
Waterford FC will be without the suspended Darragh Power (8 yellows), John Martin (8 yellows), Jack Stafford (5 yellows) and Greg Halford, who was sent off against Longford. Cameron Evans does return from suspension after missing the trip to Longford. Prince Mutswunguma is out with Callum Stringer doubtful.

TICKETS
Tickets for the final game of the season against St. Patrick’s Athletic can be pre-purchased at: