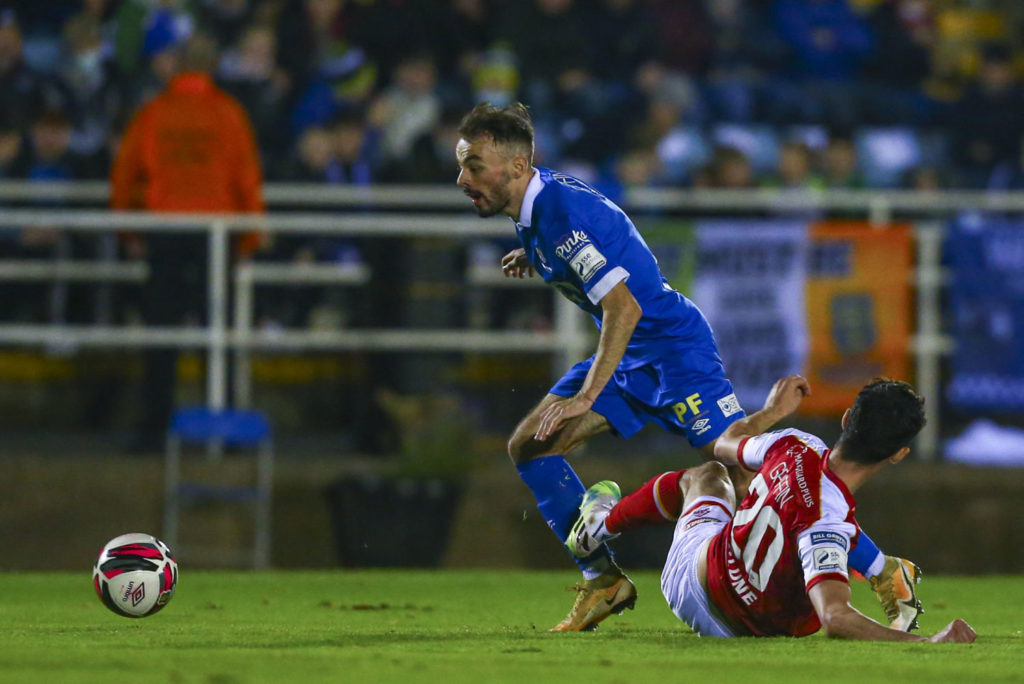 Shane Griffin of Waterford taking on the Pat’s defence.

Waterford FC will face a first relegation/playoff since 2007 when they’ll face UCD in their bid to secure their SSE Airtricity Premier Division status after they were held to a 0-0 draw against St. Patrick’s Athletic at the RSC with visiting keeper Vitezslav Jaros denying the Blues all three points with two top saves late on.

The Blues, who looked certain for the drop for long periods of the season until the arrival of Marc Bircham on Suirside, could have ended the season with a win, but Finn Harps’ cakewalk of Longford Town ensured it made little difference.

Robbie Benson struck the top of the crossbar with a header after a Chris Forrester cross on nine minutes, before striker Kyrian Nwoko was off target with a close-range shot after getting on the end of Lee Desmond cross on the half hour mark.

Waterford, who were depleted through suspension and injury, had a chance through Jeremie Milambo on 38 minutes with the left full back getting on the end of a Phoenix Patterson right-wing cross, but his effort deflected wide of  Jaros’ near post.

After Phoenix Patterson brought a save out of Jaros on 62 minutes, the visitors had a chance to go in front a minute later when Billy King danced a jig down the left before teeing up Robbie Benson, but his left-footed effort cleared Brian Murphy’s crossbar.

The Blues could have won the game with five minutes remaining on the clock when Jeremie Milambo took a pass from Cameron Evans down the left-side, but his shot was turned around the posts, before Junior Quitirna’s corner saw Niall O’Keeffe header tipped over by Vitezslav Jaros.