“I was delighted to represent that team” 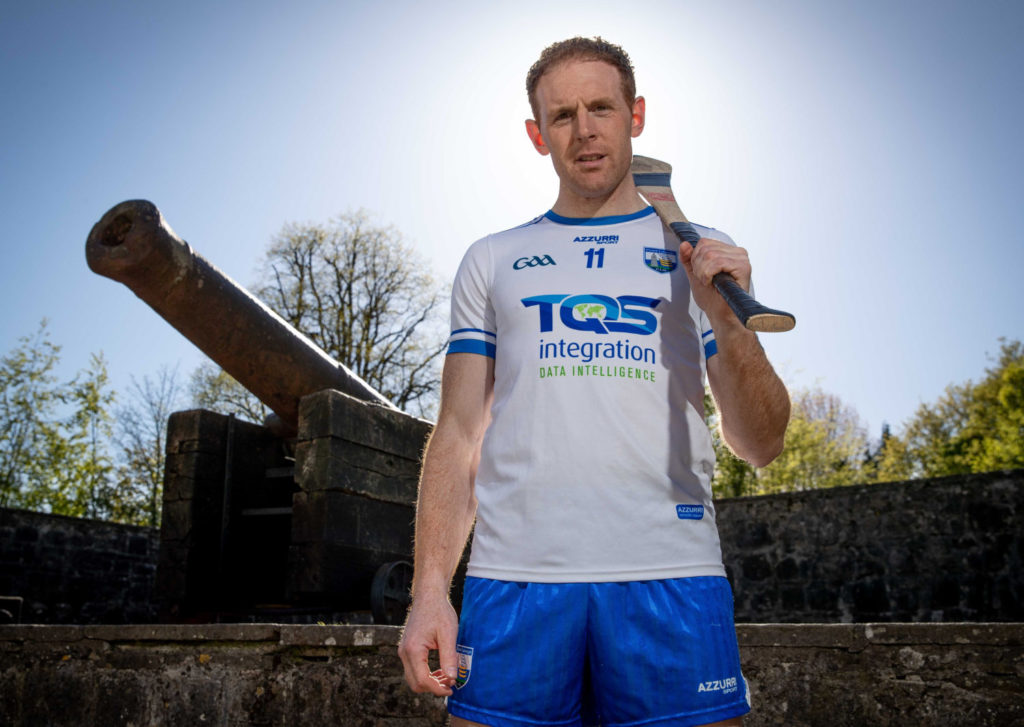 Kevin Moran announced his inter-county retirement recently after a brilliant 16 year career in the white and blue of Waterford. Photos: Inpho.

Captaining Waterford was the biggest thrill of Kevin Moran’s career.
He lifted the league trophy in 2015 after man of the match performances in both the semi final against Tipperary and the final against Cork.
“That was a really proud moment for me. I was delighted to represent that team and be captain of that group of players. It was really nice to win that National League as captain. We had a couple of tough years and turned it around. We won the 2015 league and we got ourselves back up to the top table without winning anything unfortunately. We really competed at the top level for the next three or four years. To be captain, that’s something I would look back on with great pride. If you were to ask me one thing that I would take out of it, it would be that: the pride to captain such a great bunch of players and a team that I really enjoyed playing with.”

GLITTERING CAREER
After 143 games, 16 seasons, two All Stars, two Munster titles and two leagues, Moran announced his retirement from the inter-county scene this week. “I think the time is right. I think it’s time to give a little bit back to my own club De La Salle and I’ve a couple of kids who are getting that little bit older. I’ve two small ones, a five-year-old and a one-year-old. It is getting busy in the evenings with camogie and dancing and things like that. I just thought it was a good time to focus a bit more at home and up in the club in De La Salle.”
The Waterford warrior was at the peak of his powers between 2015 and 2017 when he teamed up with Jamie Barron at midfield. They could have picked up more silverware during that period under Derek McGrath. “We trained extremely hard after a disappointing 2014. We got things on the road early in 2015 and I think the team grew in confidence. We were probably unfortunate not to win a little bit more with that team. We really competed at the top level and brought great joy to hurling fans around Waterford. Back then, myself and Jamie got on very well and still do. He’s a fantastic player to be around and just seems to get better as the years go by. We struck up a great partnership. They were some great days back then.
I’ll miss those big days more so than anything.” 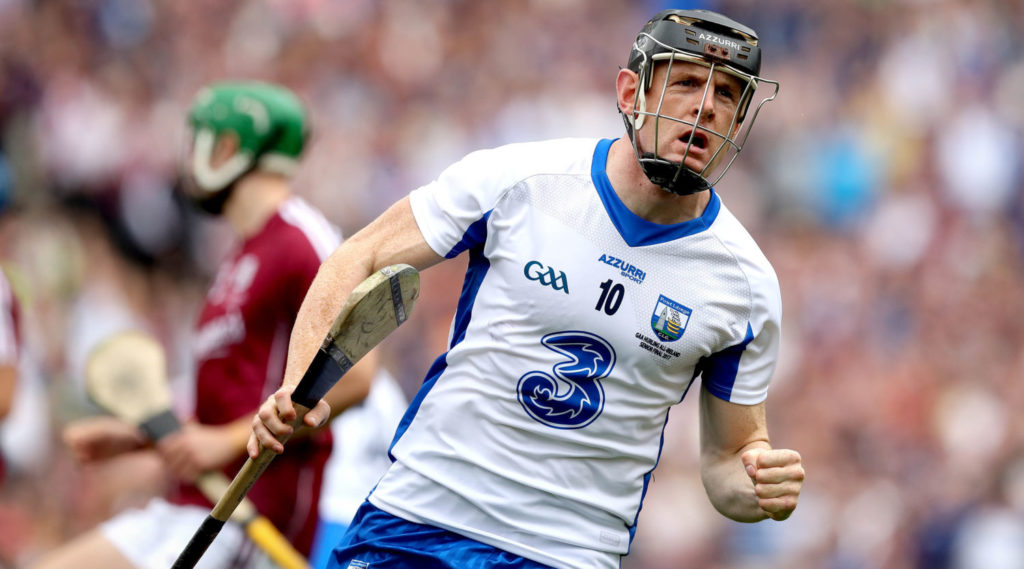 Kevin Moran celebrates scoring a goal in the 2017 All-Ireland SHC Final against Galway.

He led the Déise behind the Artane Band in 2017 on the biggest day in the hurling calendar. With his team four points down to Galway after four minutes, the captain goaled into Hill 16. “It opened up nicely and I knew we were under pressure. I just said I’d go for it and it worked out thankfully and it just settled the nerves more so than anything. You got the vibes off the players and the fans when things weren’t going great at the start. Galway just hit the ground running. It settled us a small bit. A nice goal to get but it’s a results business unfortunately and it’s a game, if we played a little bit better, we could have won.”
The marauding midfielder was nominated for Hurler of the Year after shooting 2-13 from play. That All Ireland loss still plays on his mind however. “Of course, it would. I’ve played in three All Irelands. 2008 and 2020, we were beaten by two really good teams in Kilkenny and Limerick and probably didn’t deserve to win either of those games. The 2017 one, Galway maybe slightly deserved it on the day but I would look back at that game with a little bit of regret. We could have got over the line that day if we had taken our chances or played that little bit better or if we didn’t have a couple of injuries in the game. That’s only natural. That’s sport, you can’t always get what you want.”
Michael Ryan reckons that the 2013 All Ireland qualifier against Kilkenny was Moran’s finest hour in a Waterford shirt and many Déise fans agree. His two late points forced extra time. “I remember the heat. It was a really good summer; it was an evening match and for some reason, it got hotter as the evening went on. We had a real chance of beating Kilkenny that day and we just fell short. It was a match that I’ll remember for the right and the wrong reasons. Played well towards the end of the match and got us back into contention but I got hurt then and had to go off so I missed extra time. We lost by a couple of points in the end which was disappointing. To be honest with you, I remember the heat more so than anything else!” 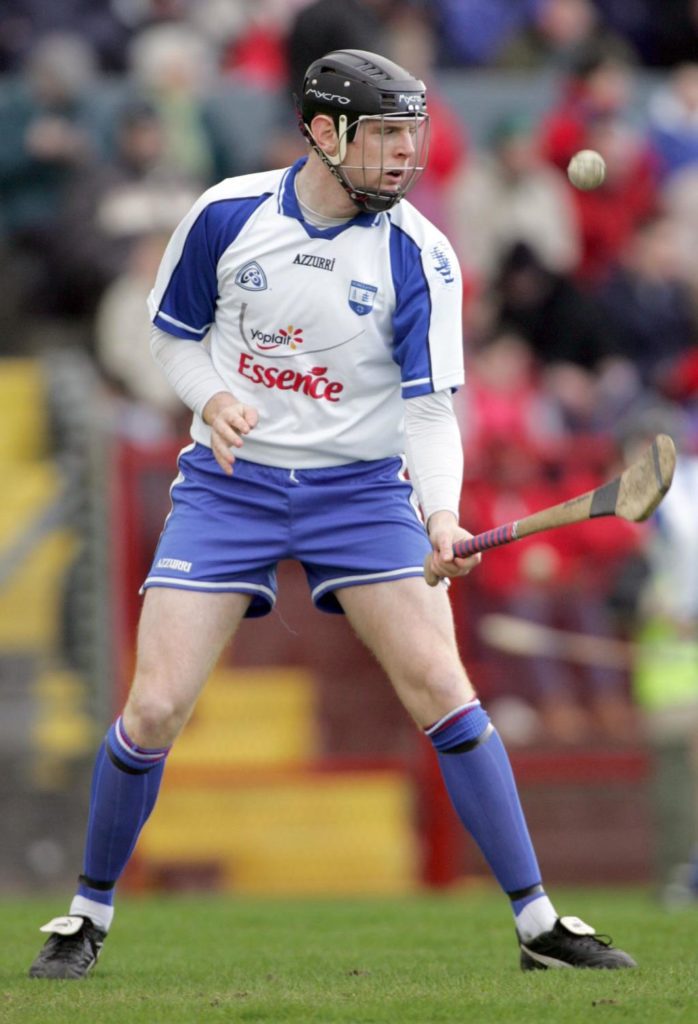 Kevin Moran in National Hurling League action in his debut season for Waterford in 2006.

Moran got his call-up as a teenager in 2006. “Jim Dee, god rest him, someone I was very fond of, gave me a ring and asked me would I be interested. They were starting training in the first week of January with Justin McCarthy. I turned up for the first session and I haven’t looked back since! I remember the first couple of training sessions up in the heavy fields and the dark nights of Aglish.”
The All Ireland semi final wins over Cork and Kilkenny at Croke Park were the high points. “One of my favourite games, for some strange reason, was last year’s All Ireland semi final when we beat Kilkenny. There was no one in the ground but we knew that everyone was at home; there was something special about that for some reason. The All Ireland semi final against Cork in 2017 as well, I really enjoyed those two victories.”
The De La Salle stalwart rates Kilkenny’s TJ Reid as his toughest opponent. “An obvious answer there! When I did come up against him, over the years, just an incredible, incredible player. Michael Fennelly was a player that I had some good battles with. Bill Cooper of Cork was a player that I came across quite a bit and we had some great battles as well.”
He will be up in the stand next year. “I’m sure it will be strange watching the guys that I’ve played with for so long in the National League and the championship. I’m really looking forward to supporting them and making a day out of it. A change of scenery next year.”
Any interest in coaching? “I love doing a few teams here in the school (De La Salle College). I’d have a small interest at the moment. It’s something I’ll focus on when I finish playing with the club. It’s something I’m passionate about and interested in and I love seeing good young hurlers coming through the school and hopefully I can help with that.”

MEMORIES & MEMENTOS
Moran will always have the memories from his time in a Waterford jersey and he kept some mementos too. “I’ve some lovely pieces of crystal at home, we got one for getting to the All Ireland and things like that. I’ve some nice mementos at home, I’ve a sliotar of the 2017 All Ireland final. My wife’s mother works in town and during lockdown, a friend of hers drew a lovely painting, small things like that are lovely to have.”
Waterford won’t be far away in 2022. “I think we’re up in the two or three. We’re the type of team that could topple Limerick. Only time will tell; I’m sure the lads will go back at it hard in the next couple of months. I just want to wish them all the very best. I made some great friends there and I’ll miss the dressing room with them. I’d just like to thank Liam Cahill, Mikey Bevans and Stephen Frampton for the last couple of years.” 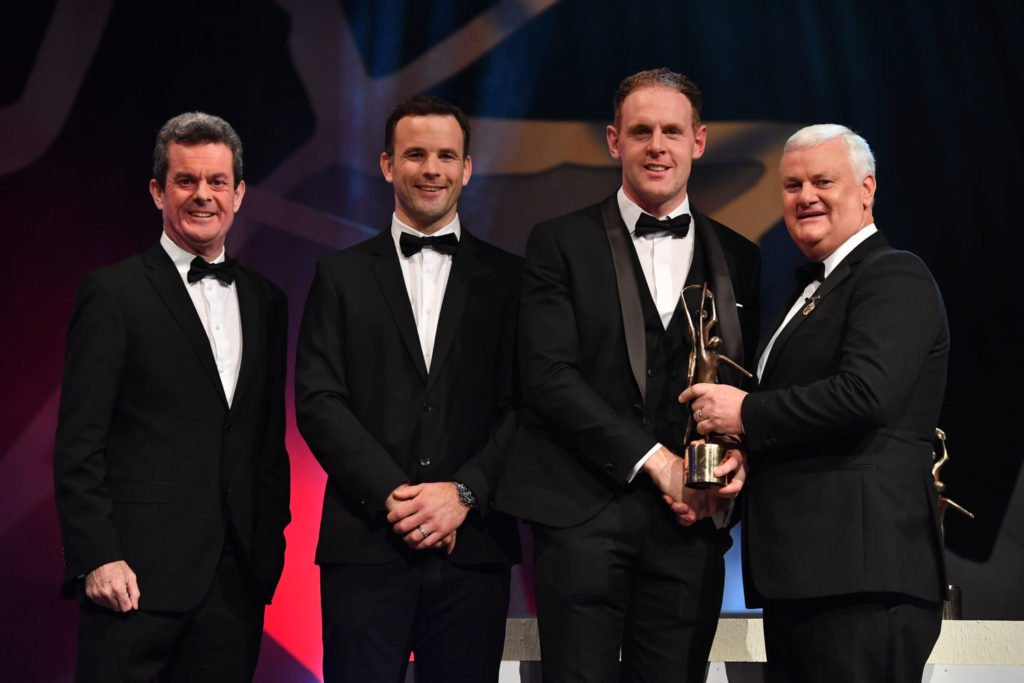 Kevin Moran is presented with his second PwC All Star award from Uachtarán Chumann Lúthchleas Gael Aogán Ó Fearghail, in the company of Feargal O’Rourke, left, Managing Partner, PwC, and David Collins, GPA President during the PwC All Stars 2017 at the Convention Centre in Dublin. Photo: Brendan Moran/Sportsfile.