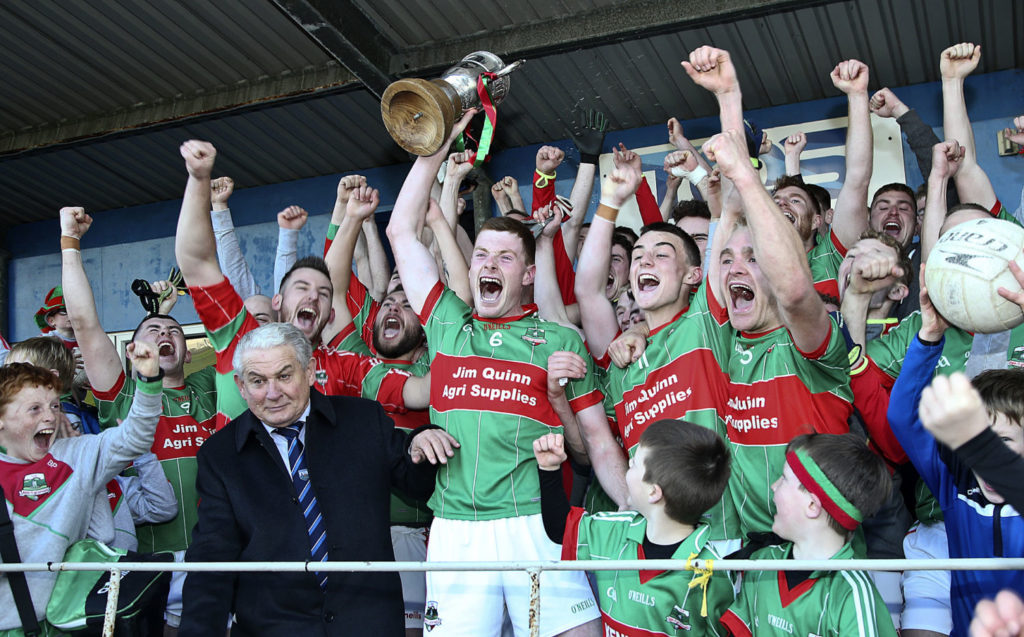 Rathgormack captain Michael Curry holds the Conway Cup high after his side ended their 20 year wait for a Co. SFC title in 2019. Will they be celebrating a second title in three years on Sunday?

After the original game was postponed due to the untimely death of Rathgormack goalkeeper Padraig Hunt’s father and Clonea GAA Chairman, Pat Hunt, the County Final will go ahead on Sunday and here’s Phil Fanning’s preview.

With the decision taken to run off the hurling championships prior in advance of the football championships we have the final of the Senior Football on Sunday next in Fraher Field where near neighbours Nire and Rathgormack will face each other for the first time in a county decider. Rathgormack go into this game having played four championship games in the preceding five weeks while the Nire have played three having received a walkover from Brickey Rangers in the group stage.
It has not been a particularly impressive senior championship up to this stage with some very one sided results in the group stages and indeed, on into the knockout games. While last weekend’s semi-finals resulted in decisive wins for the Nire and Rathgormack everything points to a cracking county final on Sunday next that is sure to bring a big crowd to Fraher Field.
Each side has been on a mission throughout this championship. For the Nire’s part it was all about avenging two successive semi-final defeats by Balliinacourty, the first of which denied the Ballymacarbery side back to back titles for the first time since winning the first two of the club’s nine titles in 1993 and 1994 with victories over Dungarvan and Gaultier respectively. Michael Ryan’s charges duly achieved that goal in some style last Saturday and go forward looking for a tenth title on Sunday next.

THREE FINALS IN A ROW
This will be a third successive final for Rathgormack, a club with a great footballing tradition and who dominated the scene in the early part of the last century. Here, they will be seeking a fifth title in the modern era, adding to the three victories in the nineties and that of 2019. Having been denied in the Covid delayed final of 2020 by Ballinacourty, Rathgormack were set on avenging that defeat only for the Nire to fulfil their own agenda in that regard last weekend. Still, facing the Nire on Sunday will not diminish in any way Rathgormack’s motivation but will add to it.
Since 1993 the Nire have been to the forefront in terms of county final appearances, just one behind Stradbally on fourteen and winning nine of those finals. On Sunday they will be drawing level on fifteen final appearances and victory would see them level with their great rivals on ten victories apiece over that period. Rathgormack will be making an eighth appearance since they returned to the top table after a long absence when losing to Dungarvan’s three in a row side in the final of 1992. They have four victories to show for those appearances. Add in Kilrossanty and clearly there has been a lot of football titles making their way to the Comeragh regions down through the years.
That this will be the first final meeting between these teams adds to the local tensions in the short build up to this final. The last championship meeting between the teams was in the group stage of the 2019 championship, a game that resulted in a narrow win for the Nire who were the defending champions. Subsequently Ballinacourty ended the Nire’s bid to retain the title and Rathgormack took the honours in the final. 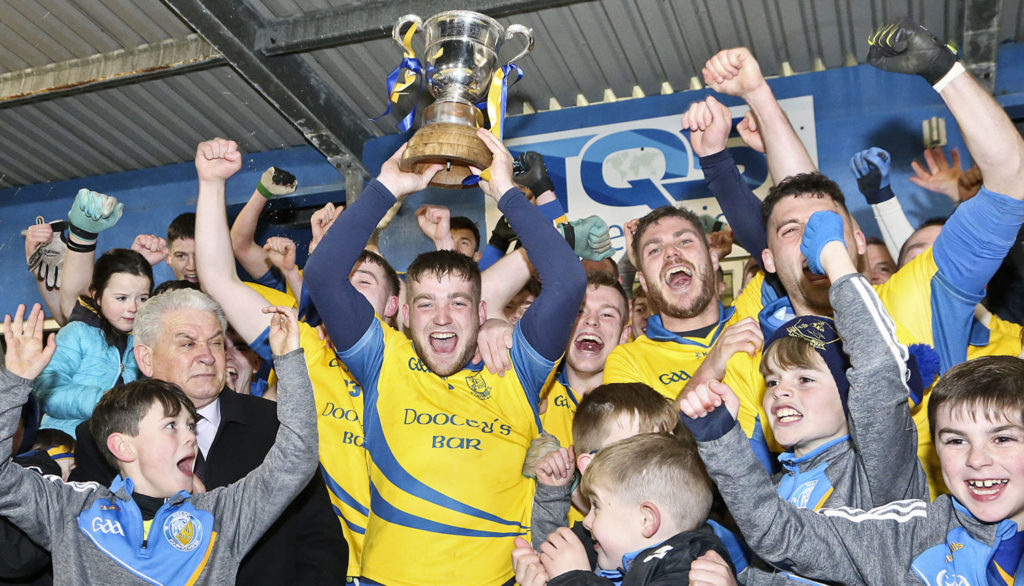 The Nire’s captain Dylan Guiry holds the Conway Cup high following the presentation by Paddy Joe Ryan, Chairman Co. GAA Board when the last won the title in 2018. Will they be back in the winners’ enclosure on Sunday? Photos: Sean Byrne.

The rivalry between the clubs is intense with the divisional line having kept them apart outside of senior football down through the years. The big prize is on the line on Sunday and there will be no holding back by either side. In Michael Ryan and Ger Power the respective clubs have experienced mentors and we will see a battle of wits on and off the field.
In the run up to this final opinion has been leaning towards the Nire and that stance would seem to have been vindicated by the manner in which defending champions Ballinacourty were put to the sword on Saturday last. There is no question but that the Nire has benefitted from the decision to run off the hurling championships ahead of the football and Fourmilewater’s exit at the quarter final stage after a valiant effort against Ballygunner has given Michael Ryan the time to regroup for an all out assault on the football title.
With a hard core of experienced campaigners in such as Thomas O’Gorman, James McGrath, Dermot Ryan, Shane Ryan, Dylan Guiry, Conor Gleeson and Jamie Barron to call on the Nire were always going to be to the shape up at the business end of the championship but the big difference this year has been the manner in which the younger players coming through have slotted seamlessly into the scheme of things. Sean Boyce, Tom Barron and Tholum Guiry have come through from underage over the past couple of years to establish themselves as regulars and this year it is the arrival of Shane O’Meara, Aaron Ryan and Sean Walsh that has completed what might have been seen as a transition from the side that last won the title in 2018.

TWO STRONG TEAMS
While the Nire had an easy run through the group stage the manner in which they crushed Stradbally and Ballinacourty, both regarded as big hitters, in the quarter and semi-finals commanded real respect and firmly installed them as favourites going into Sunday’s final.
For their part Rathgormack will be happy going into this game as rank outsiders. They were off the pace against Ballinacourty in the 2020 final played last August and despite racking up some big scores in their group games against opponents they were always going to beat they did not look to be at the same level, commitment and performance wise, that saw them to the title in 2019. Against a negative Kilmacthomas side in the quarter finals they came through decisively to face what was an impressive Gaultier side last Sunday.
That challenge seemed to bring out the best in them and they looked more like the side of 2019. They have had their share of injuries this year losing Tom Walsh and Billy Power while Jason Gleeson returned for the second half on Sunday last and showed that he is ready to start in the final. There is firepower in the Rathgormack attack with the Currys, Jason and Stephen joined by Gleeson and in Conor Murray they have a player who, on a given day can be a game changer. Add in Michael Curry, Willie Hahessy and Robbie Flynn and Conor Walsh and you have a solid, experienced cohort of players that, at their best, can hold their own in any company.

GREAT BATTLE IN PROSPECT
It has all the makings of a great battle on Sunday. The Nire must be regarded as favourites considering their performance in seeing off big names in Stradbally and Ballinacourty. It all depends on which Rathgormack side turns up on Sunday. They have the ammunition in the armoury to take on the opposition but they must have the desire and commitment to match them. It is a fascinating prospect with the Nire getting the vote as the form team.

DECIDED ON THE DAY
Sunday’s final will be decided on the day in accordance with the regulations set out by County Board and agreed by clubs at the start of the championships. In the event of a draw the game will go to extra-time and if that does not produce a winner penalties will decide the issue.
With the winners not out in Munster club action until December 4th there is a further two week window in which to play a replay if necessary, but regulations have been decided and cannot be changed. Let us hope that the game is decided over the sixty minutes or extra-time and that we do not have the championship decided on penalties as was the case recently in the Western Junior Football semi-final that saw Geraldines eliminating Old Parish.