Blues fans groups have their say on Bircham sacking 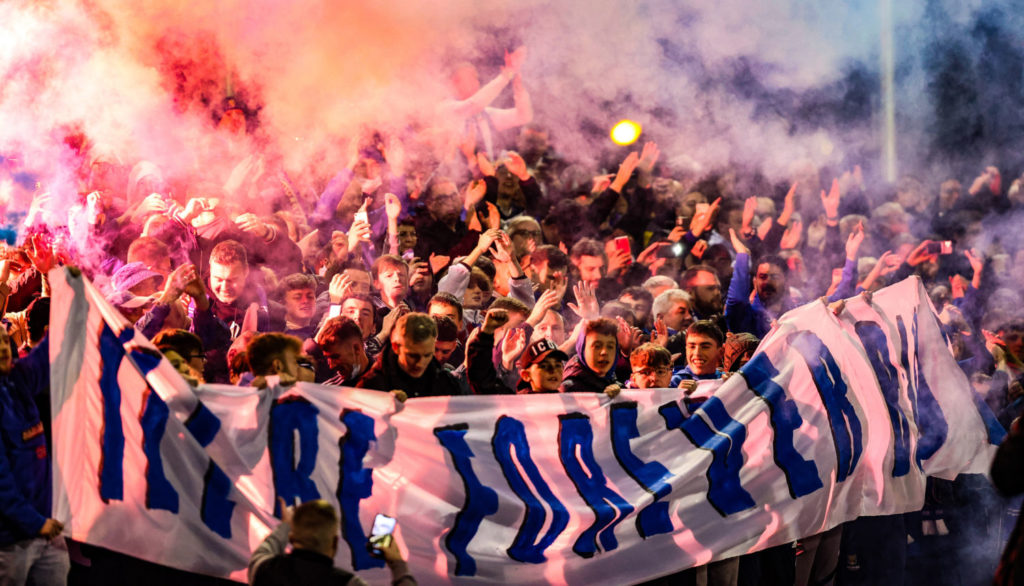 Waterford FC supporters during the club’s recent FAI Cup semi-final in Dalymount Park. Photo: Inpho.
After the bizarre happenings of this morning that saw Waterford FC terminate the contract of manager, Marc Bircham, three days ahead of their massive relegation payoff with UCD, two supporters group have had their say this afternoon.
The Waterford Blues Supporters Club issued the following statement on their Facebook page.
“After the events that unfolded this morning, like all Blues fans, the BSC are utterly shocked and disappointed with the immediate departure of first team manager Marc Bircham. The only information to hand that we have seen was the public statement from the Club like everyone else. We will keep our members informed but currently there is no further information from the club.
“This is all very disappointing with the club due to play one of its most important games in years this Friday v UCD in a relegation play off final.
For now we must all get behind the players for this huge game. We will back this team to the last

#bluestilidie”
While co-ordinator of the unofficial Blues community Facebook group and long-time Waterford FC fan Shane Murphy told RTE that the reaction to the manager’s departure has been one of “absolute shock” among the support base.

“Nobody would have seen this coming,” he said. “It’s a major shock, especially as we have a huge game on Friday.

“There was such a sense of hope, unbelievable, and buy-in from the Waterford city and county community, and everything seemed to be going in the right direction, and now we’re thrown into upheaval again.”

“The timing of the move is “crazy” with just days left to “one of the biggest games in the club’s history,” he added.

“They [the players] had worked to a plan so well over the last few months, things were really going well together and now I don’t think they know where they are…

“We’ll have a huge support on Friday, that’s one thing, and I know those players are passionate about the club and they’ll give their all no matter what happens. But it is a massive blow.”