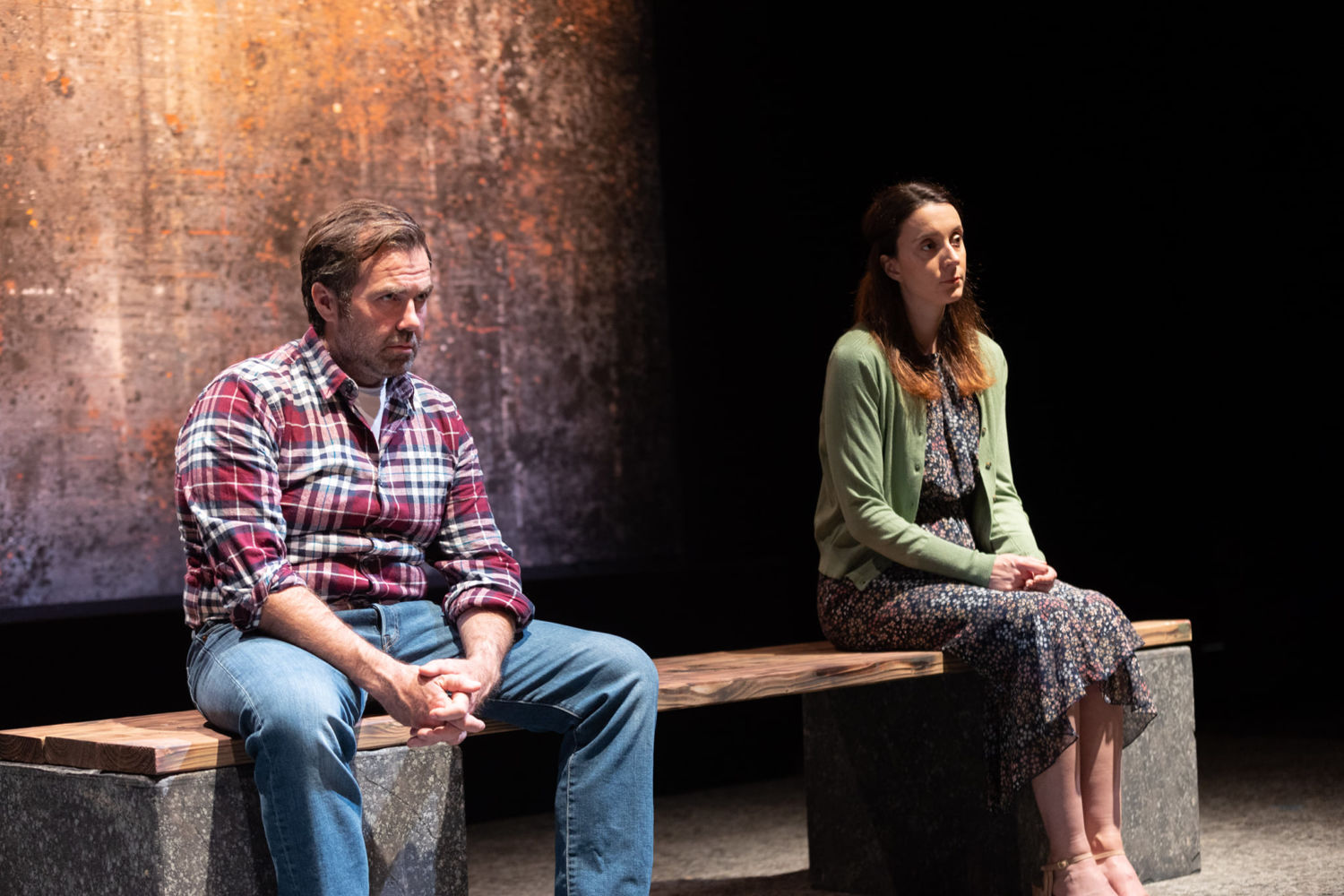 DECADENT Theatre Co. brought us theatre at its best on Tuesday last in a raw, compelling and poignant ‘Eden’ that draws a standing ovation from sections of the audience. Eden is an in-your-face performance where the rawest and most basic of emotions are on show in a no-holds barred disclosure of the innermost longings and lusts of a marriage in crisis.

The staging and set are remarkably simple. A large park bench crosses the stage to enable Billy, played by Patrick Ryan and his wife Breda, played by Maeve Fitzgerald, constantly enter and re-enter the acting space to give alternative versions of the same experiences. This is a married couple in two different worlds. Neither character ever talks to each other, indicating the now brother/sister nature of their 10-year-old marriage.

‘Eugene O’Brien’s script is a master class in writing’

Curiously they seem to talk to an inner self where they explore their deepest feelings. She longs for a return to the happiness and fulfilment of their early years while he fantasises about Imelda, a local beauty. Billy regularly refers to a child that he pulled from the sea… “is he alive, or dead, or wha’?”… failing to recognise that it is his own marriage that he is really referring to. He also has a picture of himself and Imelda in a painting that is romantic and fanciful; but also unrealistic… this is clearly never going to happen.

Billy is like an old dog chasing after a shiny new bus; he wouldn’t know what to do with it if he caught up with it. Unfortunately he destroys his marriage in the pursuit. The physical distance in their relationship is indicated by these parallel monologues, which gain in intensity as the narrative progresses. The dramatic power of the piece lies in the division of truth in recounting simple incidents: the kiss Breda steals from Billy that promises so much to her that Billy dismisses… “I le’ her do It, like, ye know”.

The action takes place over a weekend… ‘the holy trinity’ drinking-set of Fri/Sat/Sun night… in a small rural midlands town during the Celtic Tiger era. The scene is set for what is to take place at McCarthy’s bar on Sunday night when Breda, now in her Special K dress, will win back Billy’s affections; Billy will win Imelda’s. The drink flows… “the first of the vodkas go down” for Breda while Billy “skulls pints” at the bar “talkin’ shorthand like”, while watching Imelda. The action gathers pace. Breda watching for Billy’s every move, interpreting his every action, hoping for affection… “it’ll be different tonight… I’ve lost weight… I’ve made the effort”. Billy “stayin’ on track” for a move on Imelda. Billy’s guilt at “wantin’ to see Breda in the picture… bu’ I just can’t”. Billy has to be James Gallway… “the man with the golden flute”. The action moves to the post-pub party and it all unravels. Billy, skullin’ pints, trying to remember the words of the dated ‘House of the Rising Sun’ in order to impress the young Imelda, finally confesses his fantasy of both of them together in the picture. Imelda tells him to get stuffed. There’s no fool like an old fool in love.

It’s Damascus time… “I’m no James Gallway; I never was”. On the other hand Breda finds love on the canal bank with a virtual stranger and the audience is rooting for her. She’s had enough and there is little sympathy for a drunken Billy who ends the night sleeping in his little daughters’ bedroom… “Daddy, wha’ ha you doin’ down dere on the floor?”

Eugene O’Brien’s script is a master class in writing. The dialogue is a stream of consciousness where Billy and Breda’s thoughts are immediate to the audience in the exact sequence as they occur. We are always inside their minds. The description of post-pub small-town rural Ireland is brilliant… the rows, the smell of curried chips, the stupid talk, the shouts in the distance, the drone of cars were all there in their naked ugliness. The small town characters and their typical rural nick-names… the Bananas O’Brien’s, Quencher Quinn and The Tex, Noddy Noon and his mot’ Big Ears; and finally Pig Arse Breda due to her earlier weight problem. It took a long time for Breda to finally admit that to the audience.

The acting Decadent Theatre Co’s production is superb. The flat midlands accent achieves a lyrical and musical pitch with the variation of tone and pitch throughout. Patrick Ryan is superb as the 30-something bored husband who embarrasses himself at every hand’s turn. ‘Skullin pints’ Ryan, thumbs in pockets, dominates the stage with a bravado who-but-me performance of his world view that descends into a physical battle with the drink for coherence at the post-pub party.

At the end, he cuts a pathetic figure. The power balance has shifted and Billy is now “pure mule”. Maeve Fitzgerald is wonderful as the poignant, naïve, sorry-for-being-here-Breda who captures every ounce of innocence and our sympathy. She is constantly vulnerable and the audience love her. Her physical collapse into herself when she finally acknowledges that Billy no longer loves her is beyond poignant.

There are so many magic moments: Billy’s cringe-making attempt at ‘The house of the Rising Sun’; Breda’s innocent joy at the thoughts of simply being with her husband; Billy’s pathetic disclosure of his picture-fantasy to Imelda; Breda in a crumpled heap on the cold canal bank.

Andrew Flynn directs this play with style, authority and sensitivity. The gathering of pace as the action moved to a climax leaves us breathless. The direction is always sensitive to the two central characters… even Billy. We all know a Billy.

A wonderful night on the Mall.